For her role in the theatre show Dakota of the White Flats, Amelia Reynolds got behind a drumkit for the first time since she was a teenager. And this time, she felt she belonged.

When I was 10, my instrument of choice was the drums. The aggressive, messy, untamed drums. They seemed  the obvious choice for someone who wasn’t refined enough to learn how to read sheet music – drum music was simple, as phonetic as music could be. It was punky, instinctual, rhythm based, and I had a good rhythm. At least I had that.

Mum gave me my love of dancing. One of her favourite memories is of being a punk in London in the early 80s, wearing winklepickers and tartan pants, seeing Iggy Pop swinging his dick around at a grimy warehouse gig.  She has lived a life of instinct, trusting her gut, and watching her dance you can see that. She hoots at gigs, licks her fingers at restaurants, and farts when she needs to.

Growing up, I also heard when Mum called herself dumb and not very academic, how she left school at 5th form – getting 50% in school certificate sewing, failing everything else. I heard her say that she wasn’t very creative: despite making a living from designing and making clothes. Despite my memory of sitting in the corner of a cold warehouse at her weekly life drawing class. The twisted naked body of a woman draped in painters’ sheets on a plinth in my peripheral vision, Mum’s easel one of many circling her.

Mum told me that I was different to her – that I could be anything I wanted. However, I watched Mum continue to believe the kinds of stories she told herself and, so, I learnt the same.

The stories I told myself made me feel feral inside; all wrong, and undesirable. The feeling convinced me I could never be the kind of girl I really wanted to be. The kind of girl who lived in a Mediterranean-inspired new-build in the hills overlooking Nelson, like some of the girls I went to school with did. Girls who played volleyball and were tall and thin and wore orange and pink Sugar hoodies and Karen Walker necklaces. Girls who were dating boys from Boys College and went to each other’s baches in the Abel Tasman but didn’t invite me. Unlike those girls, my mum made most of my clothes; the rest I found at op-shops. Unlike the girls around me, I felt big and wide and like I took up double the physical space of everyone else, yet somehow still felt invisible and two dimensional in the world. 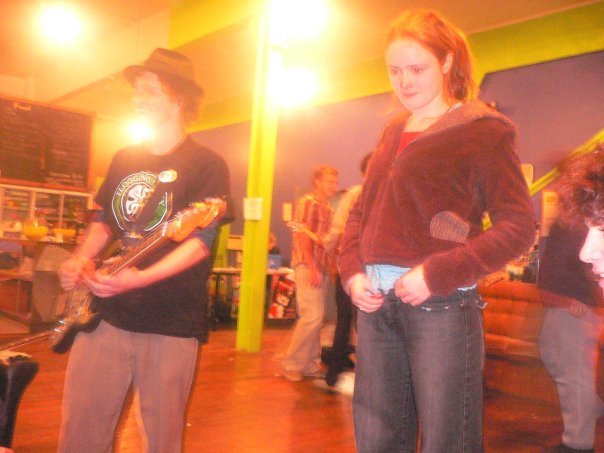 The author with her high school band, The Unmentionables (Photo: supplied)

I was one of three drummers at my high school. The only girl. When guitarists Dylan and Dev, the year above me, wanted to form a ska band to enter into Rockquest, they asked me. The other two options for drummers, both boys, were already recruited by other bands – so I was the only choice. I had never played in front of people, or along with anyone else, before. Until then, the extent of my practice was five years of half an hour a week in the sound-proofed lesson room down the back hallway of Nelson’s School of Music.

I had also never hung out with boys one-on-one. I had never kissed one and was very certain that any boy would be embarrassed to be seen with me, in any capacity. Yet, here I was in a band of boys. I hadn’t wanted to say yes to being in the band in the first place but the boys needed someone and they kept asking. I told myself I was just doing them a favour, I wasn’t adding any value to their creative endeavour – I was just the only option. They would be lucky to get anything good out of me.

Dylan was punk – he wore black jeans and heavy metal t-shirts. He had one of those cheshire cat smiles that was the shape of quarter of a moon and took up half his face. His hair was thick, jet-black, and with a long cowlick sweeping across his forehead. He was the son of a single mum who had him when she was 16 and he lived in a sleepout, where I ended up smoking my first joint. Dev was short, shorter than me, with a curly mop and sparkly blue eyes. He had a bratty, bouncy energy and was always smiling. I didn’t know what ska was and so the boys educated me: it was like punk with brass they told me. They introduced me to The Specials and The Mad Caddies, with their soft Greenday-Sublime early-2000s sound. They pointed out the surf guitar sounds of The Beach Boys and told me they wanted to make a ska song with surf sounds. Play this beat they told me, and so I learnt it. Bah-bah bah-bah bah. Two other boys joined the band too, a saxophonist and a bassist.

My drum kit was in the big empty sun-room downstairs and so that’s where we practised. Mum made me some checkered shorts and we screen-printed t-shirts with our band name on them: The Unmentionables. The lettering was embedded in checks, with the ska dancing men either side. “All good band names start with The,” Dylan said.

We rehearsed two times a week in the lead up to the Rockquest heats at Nelson’s youth centre The Hub,and then the finals at the Trafalgar Centre. It was summer and the boys would take their shirts off, their guitar straps leaving behind red marks in their milky skin. They told me what to play and got annoyed when I couldn’t jam along. They drank Flames, when they could get their hands on them, and wrote lyrics about being pirates and getting drunk. Two things I had never been. They seemed to know how to be punk without people being put off by them. Their ability to be feral made them desirable. Unlike me. 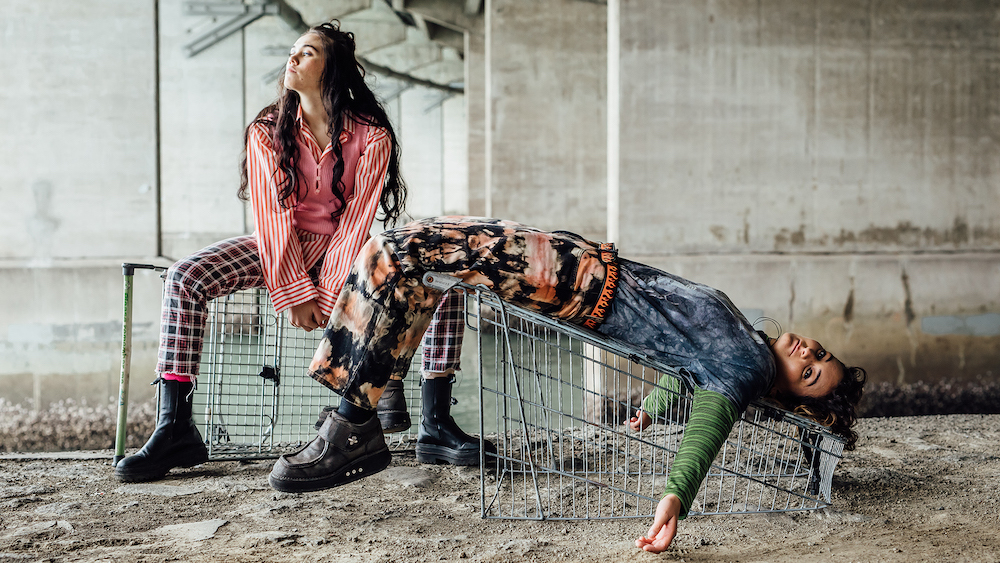 Last year I was cast in a show and at the audition we had to say if we played any instruments. “I play the drums,” I said. “Well, I played for 10 years from the age of 10. I haven’t played in ages though. And they were the wrong instrument for me, I was always too embarrassed to practise in case I annoyed the neighbours.”

The show was to be devised, meaning that throughout the rehearsal process we would be making the show. We would end with a script, rather than starting with one. For me, devising was a skill for real artists. Not me. It was the space of people who trusted themselves and their creativity and worth enough to commit to their ideas, loudly. I was too scared to play the drums loudly, let alone be bold in offering ideas from my own mind. I couldn’t understand why I had been cast.

The director asked me if I had a kit I could bring to the rehearsal room. I didn’t, and so I bought an electric one to brush up on my skills. Electric so I could play with headphones and finally be able to practise as much as I wanted to without worrying about what the neighbours thought. I couldn’t believe I had so boldly said at the audition that I could play – I had to get good really quickly. I had a couple of refresher lessons with a friend and was surprised that I remembered how to do flans, and paradiddles, and how to play double time.

Rehearsals started for the play and I was expected to just jam on the acoustic kit. Expected to be loud. The director gave us allocated band time at the end of the day, and we had to make up songs. Hannah, a singer and guitarist with bed hair, a heart shaped face and a voice the colour of amber honey, was the only “proper” musician in the cast. That made me the second most experienced. For inspiration, I watched an interview with Iggy Pop. Talking about his experience of playing he said: “When I am in the grips of it I don’t feel pleasure and I don’t feel pain, either physically or emotionally. You couldn’t feel anything and you didn’t want to either.” The quote gave me the shits. The thought of surrendering control filled me with fear. All good for Iggy Pop to say that, he’s Iggy Pop. He swings his dick around at gigs and that becomes favourite memories for people who were there.  Somehow he is celebrated for being feral. That wasn’t me.

One band practice, midway through the rehearsal period, there was a moment when a song just wasn’t sounding right. It was too empty. I assumed everyone knew that was because it needed percussion. That at any moment I would be told off for not playing right – that one of the cast would just come over, out of frustration, and start playing the song for me. That’s what the boys in the Unmentionables would have done.  But the cast didn’t. I offered a beat to fill in the silence. The cast liked it. The song worked. The feeling reminded me of the thrill I felt when we finally made it in front of the big crowd at the Trafalgar Centre. How I have never felt a rush like it. How untamed, wild, and high I felt – hearing my mum whoop in the audience, and, for the first time, liking it.

On the play’s opening night I started playing the end song – our big punk number – and my sticks flew out of my hands and across the stage. I cackled. Dropped the beat. It didn’t matter. Mum was in the audience that night too. She sat in the middle of the front row and, true to form, she whooped and cheered instinctively. As we were taking our final bows she was already up and out of her seat hugging my other family members, walking across the stage. Filled with pride for her punk of a daughter.

Mum also, finally, started calling herself an artist. About time. She’s been the bravest, boldest, person I know my whole life. I want to start calling myself one too.

Red Leap Theatre’s production of Dakota of the White Flats, based on the original novel by Philip Ridley, is at Q Theatre, Auckland, August 14 – 21. Bookings.