As part of the Spinoff Aotearoa Time Capsule of 2020 project, Sam Brooks fills up a USB with everything our descendants will need to understand the crapshoot that is life in 2020.

Earlier this week, as I was in the midst of reviewing the biggest game of the year, Spinoff editor Toby Manhire assigned me to distil 2020 in culture onto one single USB stick. While Hayden Donnell gets to live out his deranged fantasies of trying to put Dave Dobbyn on ice for a hundred years, I get one measly USB stick to sum up this entire hellyear with.

Let us not address the fact that my current laptop doesn’t even have a USB slot, so who knows how the hell the people of 2120 are going to access this information. Their problem, not mine. Which is, I suppose, how some people feel about climate change.

I’ve scoured the year for the cultural highs, the lows, and the iconiques. The below 20 things – 20 from 2020 for 2120 has some sort of ring to it – are my gift to the future. Or my curse. They’ll decide, if they can even read it. Which, again, they probably can’t.

The contents of this likely useless USB stick are included below, along with notes for whatever humans / cyborgs / alien life forms might be around in 2120 to read them:

This one Toby Morris gif

I say this without hyperbole: you’re alive to read this now because of this gif.

This was the most watched television show of 2020: one bespectacled man reading statistics, and one woman patiently and calming telling people what to do to stay alive during a global pandemic. The writing might not have aged well, but this is what TV was in 2020. The Dick Van Dyke Show doesn’t hold up either.

A pdf of the rebooted Metro magazine

Not only is it a collection of some of the best writers of 2020 in one place, but the gorgeous cover is a reminder that pop music, print media and Antarctica were all things that used to exist.

The early 20th century had a form of entertainment known as “vaudeville”. It was light comedy that included short acts from a range of theatrical forms, from magic to mime to dance to circus. Even though it was huge, it died out in the 1930s, presumably because it was unwatchable.

I suspect Six60 will have a similar trajectory. Beloved by many in their time, but bewildering many more in their wake. They are New Zealand’s highest-selling band, and this album in particular has gone quadruple platinum. 2020 is no place to judge them – I for one, fully endorse ‘Don’t Forget Your Roots – so I will let the denizens of the future do it.

A picture of all the contestants on The Bachelorette 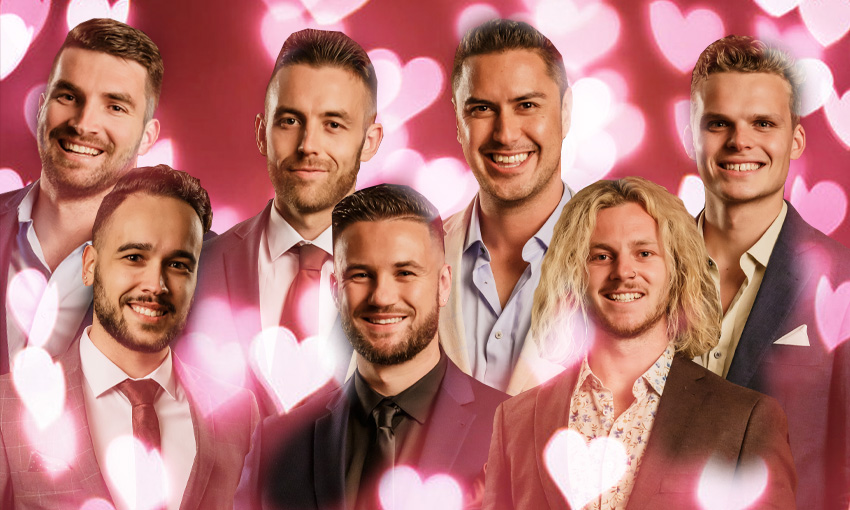 This was what network television considered the pinnacle of male beauty. Judge us for it.

The height of NZ comedy in 2020 was not scripted comedy or even improvised comedy. No, it was a four-minute clip of Tova O’Brien simply asking the newly reshuffled National caucus some very basic questions, and letting them hoist themselves by their own various petards.

And while we’re here…

No, it wasn’t The Purge, a fictional concept that I can only assume was put into law in roughly 2050, but nevertheless in one brief live clip, Tova O’Brien ended one man’s political aspirations. Bless her soul.

In 2020, we lost a lot of things. We lost JK Rowling to the terf wars, and a lot of your most boring friends lost a conversation topic because it became problematic to talk about what Hogwarts house they belonged in.

In 2020, we also gained a lot of things. We gained TiKToK*, another place for us to spend what limited time we have left on this earth on short, consumable, digital content. This gave us access to the humour of generation Z, a gift better than any secret Santa.

This choice reflects what we’ve lost (childlike appreciation of Hogwarts) and what we’ve gained (teens roasting their elders for investing so much in Hogwarts).

*Yes, I know it wasn’t launched in 2020, but this is the year it was suddenly EVERYWHERE.

In 2020, we learned how to cook from boxes sent to our houses. Or at least I did. Enclosed is a PDF recipe from one of those boxes, delivered by a company founded and fronted by Dame Nadia Lim (making an educated guess here). It is for savoury muffins.

A poem, to prove we weren’t all raging idiots

Mohammed Hassan’s beautiful poem The Guest House, written in reflection of the March 15 Christchurch attacks, is something that deserves to be remembered into 2120, and long past it. A reminder of many things, not least of all the tremendous talent that was on display one hundred years ago.

From books editor Catherine Woulfe’s write-up: “Ko Aotearoa Tātou is a collection of poems and art and essays and stories that was pulled together as we all (well, most of us) took a good hard look at ourselves after March 15. It must have been a nightmare to edit but Michelle Elvy, Paula Morris and James Norcliffe make it read easy. I like that so much of the work here semi-accidentally has to do with food – cups of tea, kebabs, G&T, rice porridge – it provides a simple hook for complex, often challenging writing and art.”

Our future was your past. Also: The first recorded instance of Future Prime Minister/King of New Zealand Felix Poole.

Twitter was a social media application that, despite what you probably now know to be true, was not actually designed to suck the users’ souls out through a screen.

Here is the worst tweet by one of our own from this year. It’s hardly the worst of Twitter, which is a cesspool that even swamp monsters would think twice about, but I think it represents the unfortunate nature of the platform: 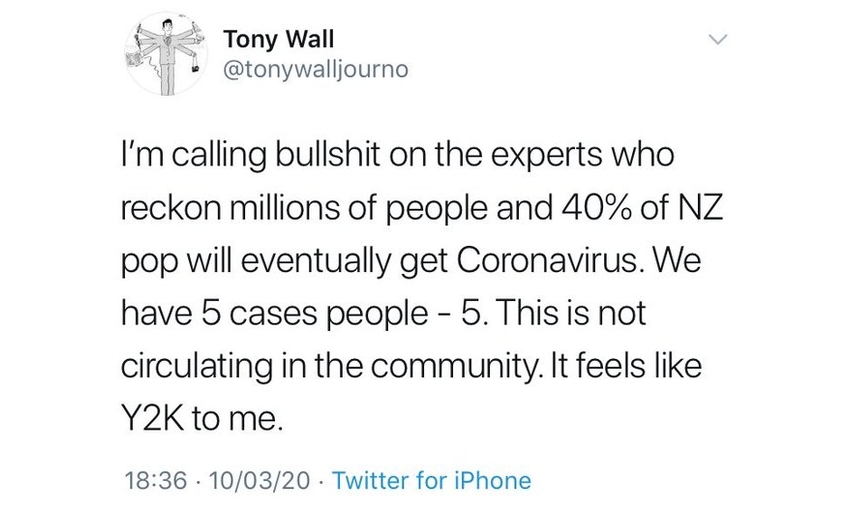 I would have liked to include a best tweet, but research indicates that all tweets are bad and none are good. Let the worst tweet remind you why they should remain buried 20,000 leagues under what used to be the sea.

This photo of Prime Minister Jacinda Ardern, uploaded to her Instagram

See above re: Toby Morris. Also see above re: lady telling us how to save our lives and the lives of others, calmly and with empathy.

A recording of the NZ Herald celebrity lockdown Zoom party

During the lockdown, we were starved for entertainment. So starved in fact, that we tuned in to watch local celebrities on Zoom, a videocall app that I assume was turned into a torture device once the coronavirus pandemic was over, hosted by our nation’s leading newspaper. If you want a caption of who was famous, or who this particular newspaper thought was famous, look no further than this clip. It might surprise you, but people watched this willingly, with joy, with boxes/bottles of wine in their homes.

Influencers were people who got paid ludicrous amounts to say nice things about products, with the aim that their followers would buy these products, and then people who make those products would pay influencers. They were the worst of us and I hope they are extinct by the time you’re reading this.

While this recipe is not the nadir of the influencer species, it is by far the funniest. It is a recipe in a cookbook by said influencer that devotes several hundred words to the act of freezing grapes.

I don’t think there is any clearer indication of how unhinged the nation became through the Covid-19 lockdown than these videos I made with a papier-mâché version of Suzanne Paul’s head, using an accent that could best be described as “south of somewhere”.

Failing that, genius famously goes unrecognised during the lifetime of its creator, and why shouldn’t future generations have to sit through what my flatmate had to sit through for two months?

2020 wasn’t the happiest year, or the most chill year. But my anecdata shows it was never happier or chiller than when Melodownz interviewed John Campbell. If influencers were the worst of us, John Campbell was the best of us.

Look, you might not have seen this clip, but if there’s one piece of international culture that sums up the world as it is concisely, it is the clip of Sarah Palin rapping ‘Baby Got Back’ on The Masked Singer.

Let me deconstruct it briefly for you. In this clip, Sarah Palin, a former vice presidential nominee and Alaskan governor, competing on a reality show, dressed as a bear, raps a song from the early 90s alongside Mariah Carey’s ex-husband, Nick Cannon. She is watched by a somehow not cancelled Robin Thicke, child murderer Jenny McCarthy, former Pussycat Nicole Scherzinger and one-time joyous man Ken Jeong. That all of these people were famous at the same time is an indictment on culture back then.

Then, it cuts to then ol’ 45 himself Donald Trump speaking on the coronavirus. Never has the fact that we, as a culture, deserved 2020 been so obvious.

What do you think belongs in the Spinoff Aotearoa 2020 time capsule? Let us know by emailing info@thespinoff.co.nz.