The contents list is nearing completion, and the location options are coming together nicely.

Last week we announced our plan to literally encapsulate the year 2020, and literally to bury it: a time capsule. A bit futuristic, a bit nostalgic, and a convenient alternative to reviewing the year by staring helplessly into the endless void. Our plan: “fill this capsule with bits and bobs that capture the year 2020”.

Four days after we launched our mission, the BBC, a plucky local media operation in the failed state of Britain, announced a plan to “create a time capsule of objects that captured life in 2020”. The BBC has 37 nominated objects. There’s the obligatory face mask, a bicycle, and so on, but nowhere have they apparently considered including the shattered dreams of a first home buyer or a note of apology.

Nor do they have a contribution from the prime minister. No Boris Johnson blood plasma, no thank you card to Nurse Jenny from Southland, no frozen turkey to symbolise the smooth sail to Brexit.

Our version, meanwhile, is taking shape. The New Zealand prime minister, Jacinda Ardern, is sending us a whiteboard marker, used in the months of fattening and flattening curves to mark the progress of the Covid-19 response. In it goes.

The director general of health, Ashley Bloomfield, is sending us a mask. And not just any mask: he’s sending us a tardis mask, with a note explaining its significance. Straight in. An artist’s impression of Bloomfield wearing a TARDIS face mask

Phil Goff is sending us a shell.

Dave Dobbyn is sending us – well, Dave Dobbyn is probably sending us a restraining order, after Hayden Donnell set about trying to convince Dave Dobbyn to put himself in the capsule. Sorry, Dave Dobbyn! If you can forgive us and I convince Hayden to stop hanging around outside your house, maybe you could send us a guitar pick from your triumphant nationwide tour with Th’ Dudes, the very fact of which would be unimaginable in most of the world. 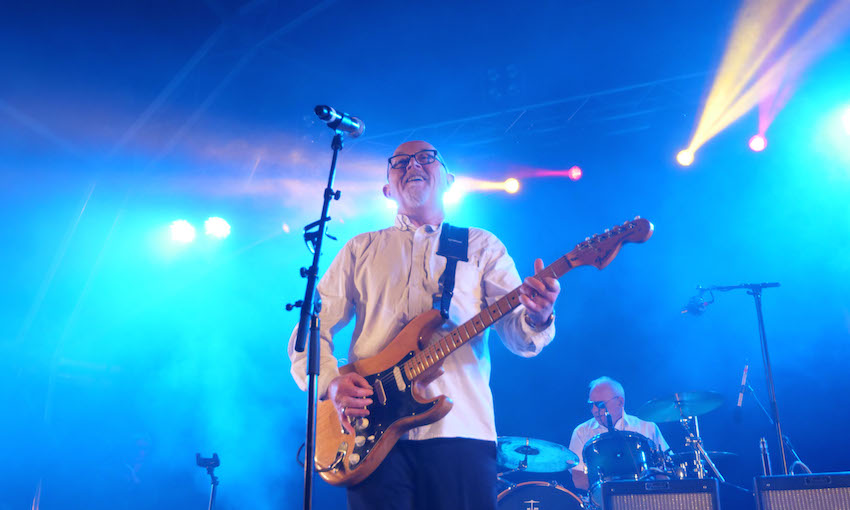 Our pantheon of political commentators weighed in yesterday. Hand sanitiser was a popular suggestion. That’s going in. Other promising ideas included Simon Bridges’ yak-patting T-shirt, a sourdough starter, loo paper and a lock of hair. We’ve got a Covid swab, too. That’s in.

The front page of the apology issue of the Dominion Post is on the list from Ātea editor Leonie Hayden. So are ngā pōtae o Te Paati Māori. Also, perhaps ambitiously, Winston Peters. Sam Brooks is curating a USB full of TV and other cultural essentials.

In the weeks to come we’ll be finalising the inventory, securing the capsule itself, then trying to squeeze the stuff in like a waist into a post-lockdown tracksuit.

Where will be put it? Josie Adams has been on the case. Here’s the state of play:

I made a list of 10 burial sites. We needed to whittle it down. The mysterious monolith took itself off the list when one appeared in a Christchurch adventure park over the weekend, rivets on display like some revolting human hack-job. No thank you. Not for our capsule.

Te Papa “isn’t the right fit”, Dave Dobbyn’s manager hasn’t responded to any emails from Spinoff staff, and the Futuro home is too expensive. We don’t need ’em anyway. We now have a shortlist of four options:

Auckland mayor Phil Goff promised to give us a three million-year-old seashell he plucked from the walls of the tunnel for our capsule, but then decided to keep the shell for himself. His office will get us another shell.

This is not a joke. It’s very important our time capsule is watertight if we use this spot. We are in talks with Tramco about whether this rubbish bin could last a full century.

It’s seen so many Wellington ‘good days’, and also a giant mound of spaghetti. We are in high-level negotiations with Wellington City Council about putting another hole in Mt Vic.

This option is late to the party but definitely the best dressed. The office of the speaker has confirmed it checked and there may be a spot in parliament depending on the size of our capsule. We are willing to compromise by removing the Iko Iko statue of Ashley Bloomfield.

If you have strong feelings, or indeed any feelings intact at all as the year nears its conclusion, it’s not too late to tell us what you think should go in and where it should be put: info@thespinoff.co.nz