A new international exhibition on a mission to ‘spread happiness around the world’ has landed in Auckland. Jihee Junn went along to see if it made her happy.

To describe yourself as “the world’s most Instagrammable event” is a pretty big claim to make, but that’s the Happy Place for you – a new pop-up exhibition in Auckland that aims to help people “find their happy”. With a series of aesthetically pleasing multi-sensory installations, the Happy Place promises a kaleidoscope of colour, a flood of effervescent whimsy, and a highly immersive experience you’d be hard-pressed to forget.

At a media preview ahead of the official opening tonight, it was immediately clear the Happy Place was all these things, except one: immersive. Located on the top floor of Spark Arena in the foyer where, traditionally, the venue’s concert-goers would be lining up at the bar for drinks, it was clear the Happy Place was less of an exhibition and rather a series of strategically placed photo walls and props. The ever-so-familiar backdrop of Spark Arena loomed large – high-rise buildings towering through the windows on one side; cheap purple fabric attempting to mask the arena’s grey brick walls on the other. But none of that mattered when it came to getting the perfect ‘gram: the Happy Place’s highly stylised booths of joy were just enough for the square frames of social media. Cubicles lined with rubber ducks and sequins enticed people in to pose for snaps, while neon signs with vague slogans gave that photogenic, artistic glow we just can’t seem to get enough of. There were walls with gumball machines (that didn’t dispense any gumballs), multi-coloured streamers (with confetti on the floor for visitors to throw in air for snaps), and a unicorn called Cornelius asking if we could be friends. The cookie room, which featured a giant plastic cookie with chocolate chip “windows” for visitors to stick their heads through, was marketed as being “scented with the aroma of freshly baked chocolate chip cookies”. Instead, it smelt mildly of perfume and pinot gris as dozens jostled for their chance of a pic in front of the life-size biscuit. Meanwhile, others were busily scuttling to the “upside-down” room next door, which ostensibly looked like something from H&M Home, but on the ceiling instead of the floor – whimsical! 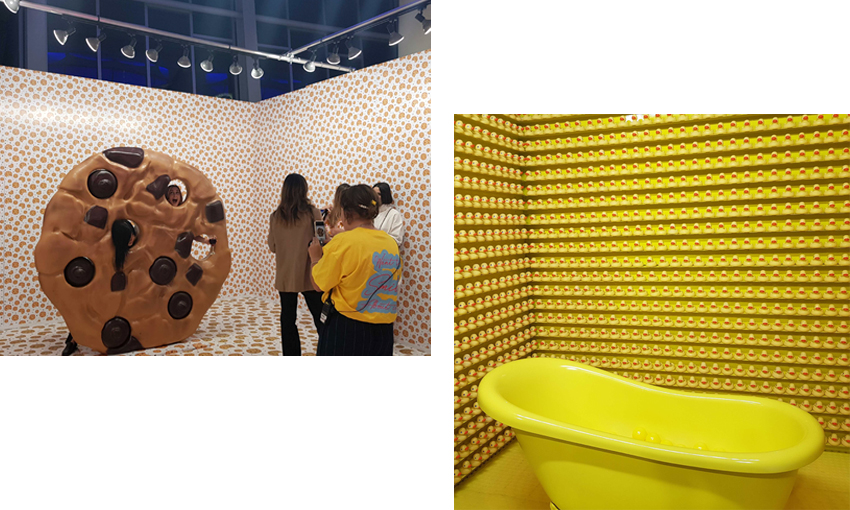 In addition to these, there were some larger installations for people to interact with, like a giant rainbow-coloured inflatable ball pit and a geodesic dome where you threw around confetti. My colleague and partner for the night, Sam Brooks, described the experience as not unlike “a McDonald’s playground”. I preferred to think of it as the inside of Jojo Siwa’s mind.

One of the more impressive installations was the “flower room”, a space blanketed in marigold yellow from top to bottom. Thousands of flowers rained down from the ceiling while others blossomed like meadows below. It was the closest thing to “immersive” the exhibition offered, albeit somewhat derivative of artists like Yayoi Kusama, TeamLab, and whoever it was that did the flowers Travis Barker gave Kourtney Kardashian for her birthday. 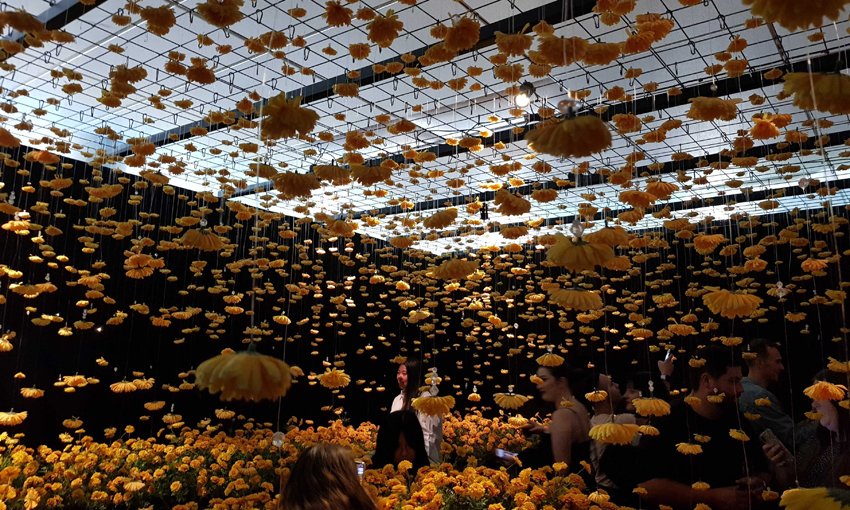 While there was plenty of hand sanitiser going around, I couldn’t help but think what a Covid nightmare this all was and how – worst-case scenario – the “Happy Place cluster” wouldn’t be happy at all. But as a virtually Covid-free country, we’re afforded freedoms unimaginable pretty much anywhere else. And after a tough year, people deserve to seek out whatever unbridled happiness works for them, with the Happy Place (for $30 a pop) offering just one option. 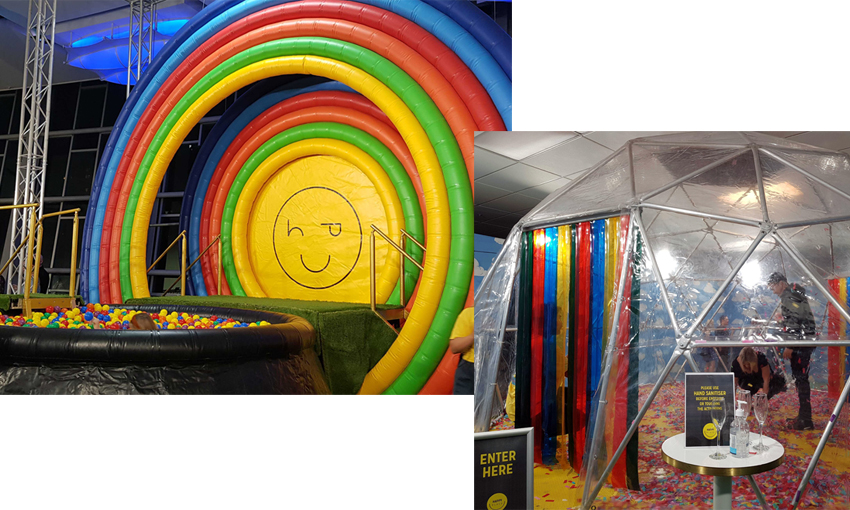 The Happy Place makes no secret of being designed with content creation in mind. It’s an event engineered for influencers and the Instagram savvy which, whether you like it or not, is the world we live in today. Come for the colour, the confetti and the ‘gram – but don’t expect to be getting a whole lot else.