Heaps of restaurants in New Zealand are hiring right now, but there appear to be few workers in sight. Some operators want the government to turn the immigration tap back on to fix the issue, while others feel it’s time the industry asked for a whole lot more.

In May, minister Stuart Nash delivered the news of the immigration reset. His message? Hire local.

Restaurant Association of New Zealand recently launched a petition on the matter. Its main requests include visa extensions for on-shore workers and immigration exceptions to alleviate the worker shortage.

Shafeeq Ismail, owner-operator of Story in Christchurch, moved to New Zealand in 2014. He brought with him years of five-star cheffing experience and training in India, the Middle East, and Spain. Ismail signed the petition soon after it came out.

Story stretched to get through last December, Ismail said. In the end it was either make redundancies, or close down. Today, Story is running on reduced hours and sticking with a set menu. Without tourists there aren’t enough diners to run a cost-effective a la carte menu, and Ismail can’t find enough new staff to increase trading hours.

For owner-operators like Ismail, the petition could be part of an immediate solution. “My first child is arriving in two weeks,” he said. “I’m trying to get a chef who can cover. I’ve advertised for a month, but can’t find someone of the right calibre…I’ve asked local chefs if they can cover for me. But they’re backed up too. Everyone’s already working.” 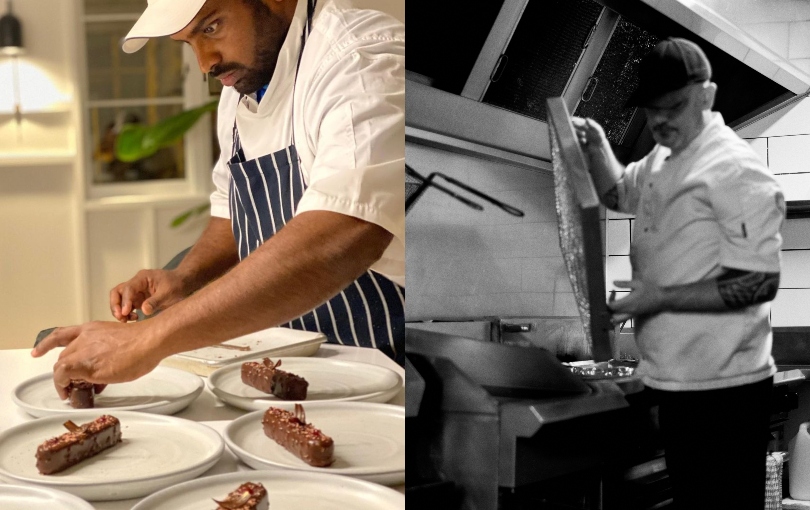 David Neville is a Wellington-based chef and restaurant consultant. As someone who’s been in the industry 25 years, he gets it, but hasn’t signed the petition. “Restaurants are dying a death by a 1,000 cuts – they need boots on the ground,” he said.

For Neville the petition poses a big question: “Are we helping immigrants who come to work here, is it truly a symbiotic relationship, or are we relying upon them way too heavily?” From his point of view, it’s not that everyone’s already working, it’s that workers have fundamentally changed.

“This generation of workers watched the rest of the world work from home during Covid. They’ve seen people who can stop and have a coffee in the sunshine whenever they feel like it.”

And 10 years ago, Neville noted, “working hospo, getting your hands inside a raw chicken – that could get you a house! That carrot on a string isn’t there now”. From his perspective,  it’s no surprise many people made redundant last year aren’t returning to the industry or are hightailing it to Australia where wages are higher.

And that raw chicken? It costs a lot more than it used to. Alongside staffing issues, restaurants are also being squeezed by increasing costs of goods. “I used to pay 49 bucks for 20 litres of cooking oil,” Ismail said. “Now I can only get 13.5 litres for that price. Costs were up before Covid, but now they’re being pushed up even more.”

Rent is another cost that seems unlikely to level out. As someone known for getting restaurants back into shape financially, Neville knows the numbers. “A 300-square-metre restaurant in any NZ city would be looking at 60k a month just to open the doors… that’s rent, power, insurance. It doesn’t even include wages, council fees and licensing.”

Those fees, Neville said, have contributed to an over-saturation of restaurants in New Zealand. “Resource planning in this space is non-existent,” he said. “There’s ticket punching upon ticket punching. Councils don’t care if you’re building another restaurant amongst 50 others. As long as you pay your fees, you’re good to go.”

According to Neville, restaurant groups that can swallow these fees are continuing to open new spots despite the worker shortage. “These groups know they didn’t have enough staff to open their last restaurant but they open another anyways.” Prospecting, it seems, isn’t exclusive to the housing crisis.

Housing, like hospo, is experiencing a worker shortage. On top of running Story, and preparing for the arrival of his first child, Ismail is building a house. “My friend is the builder and he called me the other day to say, ‘I’m not sure if I can finish it on time, there aren’t enough carpenters in the country.’”

The key difference here is that the government has stepped up to address the issue. Subsidised apprenticeships have been put in place to help the trades stabilise, attract new talent, and grow. Hospitality, Neville observed, needs the same assistance, but the government continues to call it “unskilled” labour. Of course, you could argue that hospo businesses should just offer higher wages to attract new workers. When the petition was initially released it suggested the opposite – it requested a pause on increases to the immigration wage threshold which is set to rise to $27 an hour in July.

As Ismail put it, “I’m happy to pay that. But I have to make that money first. Maybe hospo needs a tax cut, or a rebate. I’m happy to pay. It’s simple, really – when staff are happy, they do good. It’s just better. But at the end of the day, your business has to generate enough to pay higher wages.”

Most hospo businesses, Ismail feels, want to do right by their staff. But how can they when nothing in this scenario will budge? The market oversaturation can’t be easily corrected, the cost of goods will continue to rise, operational overheads have become cash cows for governing bodies… and rent? That’s its own crisis. With no limiting factors on these costs, and little support from the Beehive, this problem has fallen squarely on the shoulders of exhausted owner-operators.

It seems clear that relying on cheap labour to balance this precarious equation is no longer an option. So maybe it’s not a “something’s gotta give” scenario but a case of “someone’s gotta get involved”.

While Ismail and other owner-operators are fighting to look after the staff they do have, the government is trying to refocus tourism on high-net-worth individuals.

“For starters,” Ismail said, “that doesn’t sound very kind, only wanting people with a lot of money. And if you want to attract rich tourists, you need world-class skills to achieve that.”

Neville echoed the same sentiment, “Higher-income tourists have been to Hong Kong, seen the sails in Dubai, they’ll come with minimum expectations.” To meet them, he feels the sector needs assistance, tax breaks, and investment. “It’s just moronic that we want high-end tourism but don’t want to add hospo workers to essential skills and apprentice lists or create relief packages.”

The part of the petition that seems to be mostly agreed upon is that hospo needs a minister. Racing contributes $1.6 billion to the economy each year and has a minister. Hospitality, meanwhile, is one of our largest employers, and contributes $12 billion, yet is left to look after and organise itself.

Despite the staffing issue, Ismail and Neville both feel that there’s opportunity to be had. Neville reckons there have never been more chefs so keen to work with New Zealand ingredients.

Dine at Story and you’ll see this firsthand – local artisan producers pop in often to deliver their work to Ismail. You don’t get that in bigger places around the world, he said – it’s what makes New Zealand dining stand out.

Right now, Neville said, the major players involved need to think a bit more carefully, demand support on the governmental level, and prepare the soil for future growth that can actually support itself. “Consumers should be prepared to ride out this teething stage too,” he said.