New Zealand’s first mass vaccination event proved more popular than expected this morning, with many waiting up to an hour for their jab due to higher than anticipated demand. Justin Latif reports.

To get a vaccine, people first had to register at Manukau Institute of Technology (MIT), just up the road from the Vodafone Events Centre, where the vaccinations are taking place. A larger number of people than expected arrived at MIT on Friday morning and as a result many were waiting up to an hour before being able to catch the free bus to the vaccination site.


“An event like this has been a long time coming and it’s a great thing,” he said. But, he said, logistical problems like the ones this morning risked harming the South Auckland rollout.

“It’s fundamental for the Ministry of Health to keep building further trust in the community,” he said

Matt Hannant, the director of Auckland’s Covid-19 vaccination programme, said a large number of people had turned up early to register for the event at MIT, leading to the queues.

“We have put on additional registration staff to help us register people more quickly, and are currently working as fast as we can to clear any backlog. We want to thank those who were in the queue earlier for their patience, and our team is working to ensure that everyone who arrives can get their vaccination as quickly and efficiently as possible.”

He added that it was the first vaccination event of this scale in New Zealand, and that organisers would be quick to act on any lessons from today’s hiccups to ensure the rest of the weekend and any future events flow more smoothly. 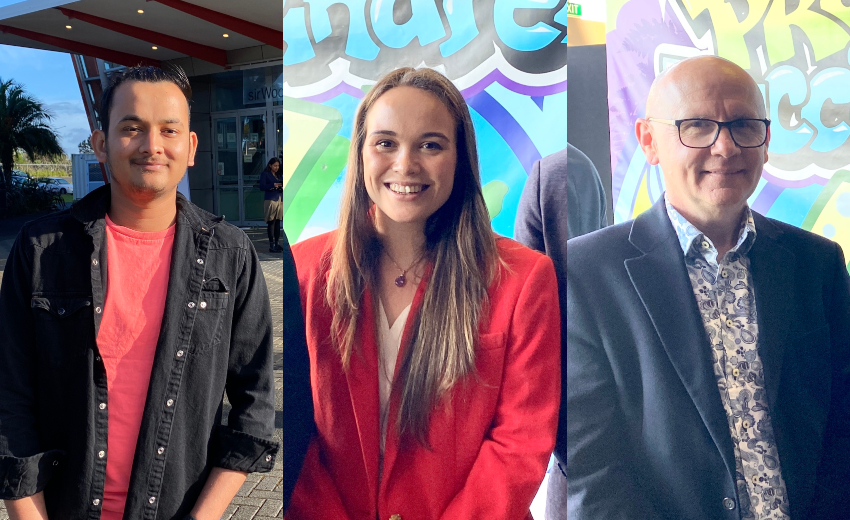 “I didn’t want to take the chance.”

After witnessing his father’s battle with Covid back in India, Neel Patel made sure he was among the first MIT students to get their vaccine on Friday morning.

“He was in hospital for two to three months. He survived but we have had a lot of financial crisis back there,” said the recent grad shortly after hopping off a free bus on Friday morning.

Patel is among the estimated 16,500 South Aucklanders who will enter one of the 242 booths at the Vodafone Events Centre over the next three days to receive their first dose of the Pfizer vaccine.

It’s expected that one person will get a jab every 90 seconds. A team of St Johns’ ambulance staff are on standby in case anyone suffers side-effects, something Patel was fearing.

“I was a bit worried – but it’s worth it, and all my classmates have also booked in.”

Local Manurewa MP Arena Williams spoke to a number of students prior to the event and she said they all were excited to be playing their part in keeping the community safe.

“I had a great conversation with students reps from MIT this morning, and they told me how important it was for them to have an initiative directly targeting them as Māori and Pacific students.”

Williams said South Auckland has been at the forefront of keeping Covid at bay from the rest of the country, so it seemed fitting that this was also the first place to hold such an event.

“This event is also about acknowledging the people of South Auckland, who are living around the border in which people enter the country.

“As a community we’ve been so resilient and bounced back every time and this is about celebrating that as much as anything else.” ‘We’re ahead of plan’

Half a million Aucklanders have now received their first dose and 250,000 are fully vaccinated, said Hannan today. Plans are currently underway for large-scale vaccination events at Fonterra and Mainfreight, with more workplace events to come.

“We’ve been really pleased with the way the community has engaged with this. We’re ahead of plan at the moment and we’ve got lots of vaccination centres and more GPs and general pharmacies coming on board.”

Alex Pimm, mass vaccination lead for the Ministry of Health, said getting MIT on board for today’s event was vital for the long term goal of getting as many people vaccinated as possible.

“MIT is a really important part of the South Auckland community, so we not only reach staff and students but can also reach a huge number of our whānau across the community.”

MIT chief executive Gus Gilmore said having so many staff and students vaccinated would give the institution greater peace of mind if there was a future outbreak.

“The focus for MIT was to get as many of our staff and students vaccinated as possible. We have a vulnerable population in South Auckland, so we wanted to take a leadership position by saying this is the right thing to do for your family.”

But during a press conference to launch the event, associate minister of health Dr Ayesha Verrall revealed that having a majority of MIT staff and students vaccinated would not mean the campus could remain open if there was a level 4 lockdown in the coming months.

“We’re still working on what a definitive view on how our public health response would change once we achieve a high level of nationwide vaccination rates.

“And that’s six months away.”