It’s a New Zealand institution – one that Emily Writes wanted no part of. So no one was more surprised than her when a family getaway to the local Top 10 turned out to be kinda blissful.

About 15 years or so ago, my husband and I were planning a holiday. I am of the view that camping is a pointless activity. I do not particularly like “nature” and I feel very strongly about shared toilet blocks and the need for poop privacy. Tramping is in my opinion just difficult walking and tents always leak. As a compromise, I told my husband, who loves camping, that we could stay in a cabin as long as it had its own toilet.

He suggested a Top 10 Holiday Park and after seeing the playground and trampoline, I ruled it out. “Fuck that. Those parks are for families with screaming kids they want to escape from.”

Well, guess who took their kids to a Top 10 Holiday Park at the weekend? It’s me. Because we are now the family with screaming kids they want to escape from. Holidays changed for us. Since kids it has certainly been a shift from the years where weekends away were about spas that didn’t have unidentified (but let’s face it, probably faecal) matter in them.

I decided to surprise my husband by giving him the best gift a parent can give another parent – a weekend without their children. I buddied up with a good friend (because kids are always easier when you combine them with other kids) and we booked our cabin.

To get a good night of sleep we didn’t tell the kids and instead just picked them up from school at the end of the day and took them to the campsite. 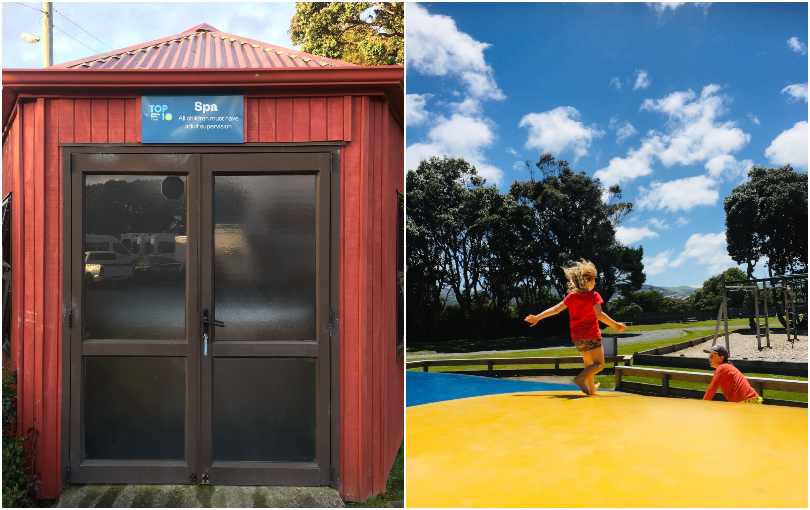 As you drive into a Top 10 – it doesn’t matter where it is in New Zealand – you’ll see similar things: a playground, one of those bouncy pillow things in blue and yellow, an old death-trap trampoline, vending machines, and a toilet block.

My children began shrieking before they’d even seen the second vending machine. “This is the best place in the world!” they screamed. When we got to the cabin they commented on the “extreme luxury” of it. “It’s  so fancy!” My son decided it was a mansion. It must have been the decor, which included a sign that said “watch out for ants”.

After deciding we would take them to the park that was directly in eyesight from the cabin and only metres away, the kids were in their element. We were able to have our first adult conversation in what felt like a year as the children broke sound levels with their excited screaming. More children joined them. More screaming. There was an injury within three and a half seconds which was quickly treated with an ice pack.

After a while we realised we were literally the only adults in the camp and basically it had just been taken over by children, so we put our feet up. It was… relaxing? Like, very relaxing? We sat down with a wine and read our books knowing the kids were safe because they were literally so loud we could hear them from every corner of the camp.

But we stood firm. “Go away and play” and “no and if you complain about it we’re leaving” were used liberally by me, while my co-parent bestie was a bit kinder to our delightful screamers. 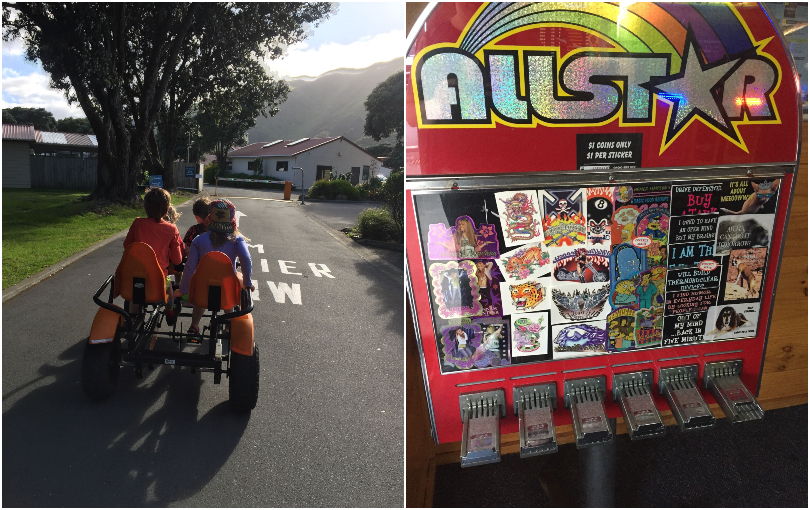 “Go play,” I said sleepily and they got dressed faster than they’ve ever been dressed in their lives and were soon playing on the giant pillow thing again while screaming. I took myself to the kitchen to get a coffee. I found more ants than I’ve ever seen in my entire life.

Bike time arrived and I paid $20 for a bike for the kids to use for two hours. Around 10 minutes into the bike ride they decided they didn’t want to play on the bikes. I explained I’d paid $20 so they would use every second of the bike for the entire two hours or they’d never get another nice thing for the rest of their lives. That worked well and you’re welcome to use it the next time you’re at a holiday park.

They were visited by two school friends and us three mums watched our six children climb into the spa wearing only undies and the naive belief that drinking spa water wouldn’t give you gastro. Before we could say “don’t put your head underwater you’ll get an ear infection” three of the six kids were duck diving into the poo water. We stood watching, swallowing down nausea at the sight of the yellow water.

The children were so excited they’d reached a new level of excited where they were basically just having out-of-body experiences that involved more screaming. We made them water balloons and they played on the trampoline with them. We played a game called “Don’t wake the lion”. This involved me lying down on the giant outdoor pillow thing and telling the kids if they woke me I’d bite them.

It was… blissful? It was super calming?

They went to the games room and played on broken 90s machines for hours.

That night things went to hell due to Type 1 diabetes being a massive buzz kill again. But the kids insisted it was the best weekend they’d ever had. Even if it was cut short. As we left the children pressed their faces against the window as if they were leaving a loved one.

“That was the best holiday of my life, Mama,” I was told once we settled in at home. “That place is like a magical kingdom. I especially liked the toilet house with all the toilets. We should have one of those at home. Was it your best holiday too?”