Alex Casey chats to Lisa Fa’alafi and Busty Beatz from the theatrical experience Hot Brown Honey, an extravaganza of stereotype-smashing, hip hop politics and costumes that would make Beyoncé jealous.

Coming to New Zealand from Australia as a part of the Auckland PRIDE festival, Hot Brown Honey is a sizzling celebration of loud, proud women of colour. Devised by director Lisa Fa’alafi and musical director Busty Beatz, the one-hour show promises an “audacious platter of dance, poetry, comedy, circus, striptease and song,” gleefully reclaiming the theatre space and raising consciousness in a time where the world most definitely needs it.

It’s got feathers, it’s got unabashed female empowerment, it’s got an enormous pulsating beehive. What more could you possibly want from a cabaret show? I spoke to Lisa and Busty via Skype, ahead of the Honeys’ maiden voyage to New Zealand shores.

My first question today is quite urgent: how good are Beyonce’s twins?

Busty Beatz: She’s gonna populate the world, I swear. I saw someone said on the internet that there are more Black people in Beyonce’s womb than in Trump’s entire cabinet.

Scary but true. The world is in quite a hellish place right now and there’s a lot going on – weirdly it feels like the perfect time for a fun, feisty female-driven show. Would you agree?

LF: Yes. It’s like we always say, ‘decolonise and moisturise’. I feel like our show is the moisturise part in a big way. We’ve been working on it for a number of years now, because we felt this sense of urgency. It’s uncanny that we’re getting a bit of traction just as the world is ready to stand.

So, what is the Hot Brown Honey experience?

BB: We are the Hot Brown Honeys. Our catchphrase is ‘fighting the power never tasted so sweet’. We’re here and we’re ready to make noise. We’ve been working really hard to find ways to make noise together and have a moment in time to show the world it’s time to stand up together. The world is in the motion of waking up as well, so it’s a very fitting show for 2017.

The experience itself is massive, there are heaps of different feelings all the way through. It’s all about our experiences as brown women, and weaving it into this whirlwind theatrical explosion that helps take people on our journey.

LF: It’s a political theatre piece wrapped in an entertaining bow. We have such a fun time show but the aim is, like Busty said, to have all the feels and to walk away from the show feeling empowered. We want to make people – no matter what background they are from or what privilege they have – feel like they can make some change in the world. It’s about telling our stories, celebrating ourselves and celebrating our community.

I don’t know how we got the mix right, but this hour-long, energy-driven, issues-based work seems to be punching through to people. Which is amazing for us, because it is a show but it’s also a resistance.

New Zealand audiences can often be pretty wimpy when it comes to confrontational, in your face things – should they just suck it up and come anyway?

BB: We’re also like, reeaaally funny. I know New Zealanders have a good sense of humour, so we break things apart and break through to people because of our humour and the type of comedy that we use. It’s not scary. We laugh at ourselves, we laugh at the social barriers around us to make a statement. We’re talking as much about our joy as our oppression. Across all first nation women, the thing that connects all of our cultures is laughter.

LF: I’m hoping that all the Islanders are going to come out to support our women, even if some of the issues might push more conservative boundaries.

I saw in the show trailer there’s a quote you use about stereotypes, that they “make one story the only story.” How have you encountered that in action personally?

BB: That’s a quote from Chimamanda Ngozi Adichie, an amazing feminist writer from Nigeria. Look, I suppose we find even being artists that there are stereotypes that infiltrate every part of our existence. We are always being cast in roles that embody ‘the maid’ or ‘the help’.

We are not the maid. We are the stars and we are centre stage and that’s where we need to be. There’s this stereotype in wider culture that all of our cast have experienced as brown women, which is this idea of exoticism. There’s this idea of always being ‘the exotic’ which is only one tiny part of us. We enjoy smashing that and just saying ‘nup – we’re more than this.’

Without giving too much away, how do you manage to smash these stereotypes in a one hour show?

LF: I think from just placing ourselves in centre stage, we are already challenging stereotypes. We are claiming the space, we are writing the show, we are doing it all ourselves. That, in itself, is a fact that we are very proud of. People of colour are always up against so much negativity in terms of how we are portrayed, so just being strong and positive and owning every bit of ourselves is pretty subversive.

BB: There’s a stereotype about ‘the angry black woman’ which I’ve actually embraced as a part of Hot Brown Honeys. Like, YES, there’s a whole lot of joy and passion and fire in me as well and that’s a beautiful thing. It’s hard sometimes to accept that about yourself, but when there’s something in the world that makes you really cross, it’s great to have an outlet.

You two are lucky to have the platform of theatre and the talent to use it as an outlet, but do you have any cool tips from the Hot Brown Honey guidebook for regular schmoes?

BB: There are so many things that we have to do every day. Like Lisa said before, decolonise and moisturise is kind of a rallying cry, but what that means is giving yourself the time to process things. Give yourself the time for self-care. It’s really important that everyone has that. Step back and realise that all these issues in the world right now are really massive, so how do you not get overwhelmed at every moment? Make small changes to deal with it.

For example, you might be walking down the street and think that maybe you won’t touch that woman’s beautiful afro without asking, maybe reconsider touching people without their consent. Or even think about the way that you speak with someone, have empathy and realise that not everyone comes from the same place as you. Think to yourself, ‘oh, they haven’t had the same experience as I have, so maybe I should just listen’.

LF: We have a song in the show which is ‘Don’t Touch My Hair’ – which Solange unfortunately released before we did. We rock out in the song and people find it fun and exciting, but it’s actually just highlighting something that might seem small to some people that effects others more than they think. We’ve had so many people say to us after shows ‘oh my God, I’ve done that!’. If we can just have people making those realisations in the lobby then that’s somebody that we’ve helped.

The show is about “creating spaces for your own faces” because there were no brown faces in Australian popular culture, is that still the case?

BB: What we’ve found is that there are Honeys EVERYWHERE. We’ve found this amazing groundswell of beautiful, fierce, amazing, talented performers, actors and dancers who are all there – they’ve just never been given a platform. They are all working so hard to get one break that never happens, because of how the industry is. There has to be a real shift in power to get different faces in there. That hasn’t happened, so we’re going to do it.

LF: We gave up waiting to fit into those systems and structures, so we just thought we’d do it ourselves. It’s taken a lot of work, but the space for us just wouldn’t have been there otherwise. You can see that conversations are starting to be had about diversity, but we’re still scratching our way up the ladder.

Yes, Hot Brown Honey is a show for the six of us, but it’s also a platform for those hundreds of women waiting in the fringes waiting to come forward. If there is a chance that we can bring anyone with us, we will. One day we’ll make it to the West End with a 200-odd cast. You know what’s crazy? We keep selling out. A lot of the community are ready to see their own faces. If you make the work for them, they will come.

Talking of that, who were your role models growing up? How do you find heroes when there’s nobody who you identify with?

LF: For me, it was really hard for me to identify any role models in popular culture – outside of Paula Abdul or Janet Jackson. That’s why we hope we can be role models for the next generation to come, because I really didn’t feel like I could find that growing up, going to a poor school and enrolling in a theatre course where there was only one other brown person in the whole school.

BB: Growing up in Australia, everything was very limited. There was only one perspective through the television. I remember when I first saw Leah Purcell on stage and went ‘OH MY GOD’, she was this beautiful Aboriginal woman embracing her power onstage. Even as a South African woman living in Australia, that took things to another level for me – I realised what was possible. I can only hope that we can inspire one person with our show to take their place in the world like that. 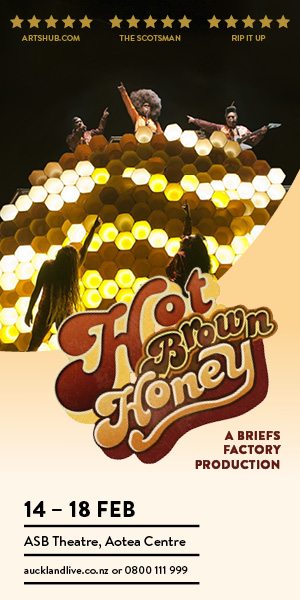