Good morning and welcome to The Bulletin. In today’s edition: Tourism suffers in the shadow of Covid-19, two new positive cases in Auckland confirmed, and National will contest the Māori electorates.

The front page of the January 4 Greymouth Star carried grim tidings for several of the glacier towns on the West Coast. The reporting has been republished on the ODT. Business in Franz Josef and Fox Glacier had dropped away almost completely, with the loss of international visitors. Many businesses were reporting losing up to 90% of their turnover from two years ago. Most tellingly, the permanent population of Franz has crashed – from about 1000 to more like 400.

They’re the sort of blows towns can struggle to ever recover from, and for Franz the situation is particularly pressing. Local democracy reporter Lois Williams has covered a battle over funding to build a new stopbank for the Waiho (Waiau) River, and what it signifies for the future. At the moment, there are plans to shift the town north altogether. But as Stuff’s Nikki Macdonald reported last year, the glaciers are retreating. It may not be the only drawcard the area has, but it would be a serious blow to lose.

There have been some places that have done okay over summer. But many that are heavily reliant on tourism have seen sharp dips in visitor numbers, across the wider season especially. The NZ Herald reported recently that DOC data showed visitor numbers for Great Walks are way down year on year, particularly the more remote ones. And the money flowing in isn’t a patch on what the sector previously enjoyed.Radio NZ reports industry figures that show about $3bn was spent over two summer months last time international tourists were here – even with an increased domestic spend, that cash is just gone.

So is there salvation in sight for the industry? If there is, it’s not coming from overseas. The NZ Herald reported yesterday on comments from PM Ardern, that borders are likely to be closed in some shape or form all year, with the risk of reopening deemed too great. Even the trans-Tasman bubble, which many in the industry had hoped would be in place by March, is now starting to look further away, reports Radio NZ. Many businesses – and potentially a few tourist towns completely – will not be able to hang on until the borders do reopen.

Two people who had gone through managed isolation at the Pullman hotel have now tested positive for Covid-19. Our live updates has the details – they completed their fortnight and then went into the community, with a number of locations of interest around the North Shore of Auckland. New testing sites have been added too. There has as yet been no indication the alert levels will move up, according to Covid-19 minister Chris Hipkins on Newstalk ZB this morning. He also said useful information had now come through the genome sequencing process connecting these two cases to the Northland case.

But the situation has become rather more urgent in the last 24 hours, and it increases the need for people to scan everywhere. On that subject, I’d encourage you to read this piece by Charlotte Muru-Lanning, who has written about how hospo workers feel when they see people not scanning in. Apart from that, if you’re feeling sick, stay home until you’ve got a test.

National has confirmed it will once again contest the Māori electorates, reports Maiki Sherman for One News. The party has a long-held policy that the seats could be abolished if Māori themselves chose that, and as such hasn’t stood candidates. The change was pushed for by former MP Jo Hayes, who said she and other Māori MPs had been urging it for a while. It’s fair to say they’ll be close to unwinnable for the National party, however standing candidates will generally assist in picking up party votes.

Auckland’s water levels are once again low – it is summer after all. However, they aren’t yet at catastrophic levels, and that’s because people have been conscientiously using less. This is a particularly thought-provoking piece from Stuff’s Todd Niall about how consumption was brought down. Looking ahead to the future, I wonder if it’s time we stopped bothering with cycles of restrictions tightening and loosening, and accepted instead that lower water consumption patterns have to be made permanent for the growing city.

Advertisers are pulling support from talkback station Magic Talk, over comments made by fill-in host John Banks. I’ve reported the story, which included calls for him to be removed from the airwaves altogether – subsequently to it being published, parent company Mediaworks announced that Banks would not be seeing out the rest of his replacement stint.

Something for book readers: The finalists for the Ockham awards were released this morning, and poetry editor Chris Tse and books editor Catherine Woulfe have put together some thoughts on who did and didn’t get the nod. 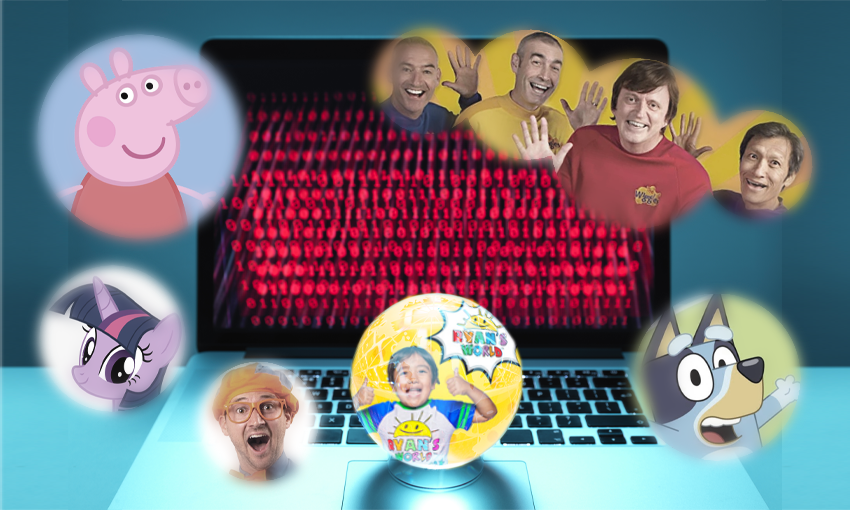 You know these faces. At the start of last week, this writer didn’t. He wishes he’d never learned. (Image: Tina Tiller)

Right now on The Spinoff: Charlotte Ryan of Ensemble writes about the MeToo reckoning currently rocking the music industry. A team of people have some tips for how to take control of your financial future. Stewart Sowman-Lund interview’s New Zealand’s newest science celeb, the mustachioed and mulleted Dr Joel Rindelaub. Sam Brooks rapidly loses it while watching a week’s worth of children’s TV. And the Dietary Requirements podcast ponders what makes the perfect pub.

For a feature today, a look at what it’s like to live in a rich country with almost no legally mandated sick leave minimums. Independent US journalist Luke O’Neill has collected a whole swathe of stories that outline what happens to workplace culture when it’s not available. A warning – some of the language in this piece is quite strong. Here’s an excerpt, from one of the first person accounts.

I worked in a lot of food service jobs as a teen, Arby’s, Taco Bell, etc., and I can say for certain that the industry standard is that you can’t call in sick unless you find someone to take your shift. It’s your responsibility to call around and ask your co-workers on their day off to see if they can cover you. If nobody can/will, you either have to come in anyway or be written up. If this has happened before and you’ve already gotten a write-up or two from it, then you’re looking at losing your job if you don’t come in.

Sick pay does not exist in these jobs, so you also have to factor in if you can afford to take time off anyway. This was how it was done every single place I worked in high school. I know this is the standard for most menial labor type jobs but I always found it particularly disturbing in food service specifically. If you’re picking up fast food ever there’s a pretty good chance somebody handling your food is sick. It’s just par for the course.

A scoop about sport and politics getting very mixed: ESPN Cricinfo’s Daniel Brettig and Adam Collins report that plans in Australia to field an all-Indigenous PM’s XI were canned, after PM Scott Morrison won re-election in 2019. The PM’s XI teams are selected for exhibition matches, generally played as warmups for touring sides. Cricket Australia were keen on the idea, as a way of promoting reconciliation. However, it is understood that the government then pushed back, meaning the whole thing got put on the backburner. Meanwhile, the ABC reported last week that Cricket Australia would no longer refer to ‘Australia Day’ in their promotion of matches, with the day becoming increasingly controversial in the country.