The Otago Central Rail Trail is one of our most famous and beloved cycle trails, and for good reason – but is it doable with young kids? Absolutely, writes Maria Grace.

Thought about a multi-day cycling trip with your primary-aged kids, but worried about how it would pan out? A month ago, we were too. Accommodation was booked, gear was packed, bribes of chocolate and pineapple lumps were ready in the pocket. But we didn’t yet know how it would actually turn out in the end.

We knew it would be an adventure – either in a really good way, or a really tiring one. And it was.

But what we didn’t expect was that it would be one of the greatest holidays we’ve ever had. The kids have already asked when we can go cycling again. If you want to know what we did, what we packed, and what made it awesomely kid-friendly, here’s the low-down on our trip.

We ‘did’ the Otago Central Rail Trail, but we didn’t do the whole trail

We started in the middle of the trail, at Oturehua, and worked our way down to Clyde. As a result, most of the trail was downhill: Oturehua stands near the highest point of the trail at 500m, and Clyde is at only 173m. It was a deliberate decision to go from high to low because we had the sneaking suspicion that the six-year-old really, really didn’t like cycling uphill. Heading from Lauder to Omakau, with the six-year-old in the lead in the distance

We averaged just 15km a day

I know adults can easily ride 40-50km a day and tend to complete the entire Rail Trail (152km) within three to five days, but 15km was about as much as our six-year-old daughter was capable cycling independently. So we cycled at her pace.

In hindsight, that’s what ended up making this trip a real holiday. We loitered. In Omakau, we spent the entire afternoon in the backyard of a pub, shaded under a chestnut tree and playing yard games the proprietors of the hotel had set up for us. We climbed rock formations around Tiger Hill and explored remains of old workers’ cottages near Poolburn Gorge. Aside from rain which we were trying to get out of on our first day, there was never any “rush” to get to places.

As a result, my main emotional memory of the trip is simply the ease and comfort of simply hanging out as a family. What the ground looked like in Oturehua, Central Otago – on Boxing Day.

We towed a tandem trailer for our gear

A lucky TradeMe buy from many years ago, our Thule Chariot is a convertible pram / trailer which can fit two children up to the age of around six (after that it starts resembling a can of sardines – well-packed but very hard to get anything in or out of).

While we weren’t planning to tow any of our kids in a trailer, we decided to bring it along for two reasons. One was storing gear: things fit in a trailer much easier than they do in a pannier bag. And two, if our six-year-old really threw a wobbly and refused to cycle, we could fit her inside the trailer, tie her bike on top of it and move on.

And it turns out that’s exactly how it worked. On our very first day, a sleety Southerly rain started lashing Ida Valley within 10 minutes of setting off and we realised to our horror that we hadn’t packed any gloves. Soon, everyone’s hands were numb with cold. The six-year-old started howling, which we tried to pacify with Pineapple Lumps dealt out at 200m intervals. But she continued howling so fiercely the lolly dropped from her mouth, which made her howl even louder. It was at that point we stuck her in the trailer, tied her little bike on top of it and… moved on.

Luckily, the rain soon gave way to sunshine and the six-year-old’s declaration that she was ready to cycle again – and we never used the trailer for anything other than storing gear again. 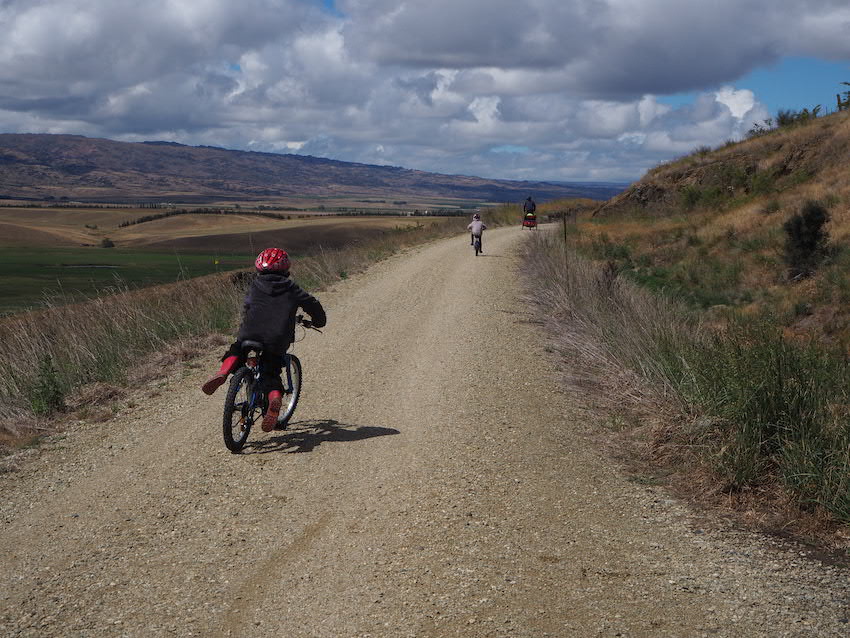 We ‘car-hopped’ at the end of each day

In the end, we decided to “carhop” instead. At the end of each day, one of the adults would leapfrog the car to the next location, then cycle back to our accommodation for the night. It worked really well: we always had the car close to us and could dump unwanted gear (such as rain gear) in the car when we didn’t need it. And with such small daily distances, it was relatively easy for an adult to do the extra journey. Getting ice creams at a trail-side cafe at Chatto Creek

We packed the right gear

Aside from forgetting to pack gloves, we had what I consider a pretty bloody good set of gear. You can see our entire packing list here.

Having never gone on such a leisurely cycle trip before, it blew my mind how differently I viewed the landscape and the small communities we passed on the way.

In my early 20s, I had taken several cycling trips, but I had always “powered on” for long distances, stopping to rest and eat, intent on reaching whatever destination I had in mind that day. The prevailing memories are of headwinds, and of being proud of myself, but I don’t remember much of where I went.

On the Otago Central Rail Trail, however, I have distinct memories of the small towns we stayed in, and the people we talked to. Oturehua. Lauder. Omakau. Chatto Creek. Clyde. I can imagine maps of the terrain we covered, because we took such plentiful stops on the way to let our kids explore. Being the Christmas break, it was cherry season, and we bought copious amounts of fresh fruit and even picked our own cherries in Roxburgh on the drive over. The Rail Trail is rough gravel road, so all our bums hurt a little from sitting on our saddles. But it never got to a point of being a nuisance. We just didn’t cycle long enough each day for it to become an issue.

In fact, our Rail Trail trip was such a great holiday that we have already booked our next cycle trip: this time on the nearby Clutha Gold Trail, starting in Alexandra and working our way downriver towards Millers Flat. The thing the kids are looking forward to most this time? Being transferred through Roxburgh Gorge on a jetboat where riverbanks are too steep to cycle – bicycles and all.

Arrive in Oturehua by car. Stay at Crow’s Nest Backpackers, which has a large bunkroom upstairs and good kitchen downstairs. Continental breakfast provided.

Cycle from Oturehua to Lauder (24km). There are two long tunnels in the second half (bring headtorches!). There are no towns on this stretch so bring all food you may need during the day. Afternoon tea at Stationside Cafe, and overnight accommodation at Muddy Creek Cutting, an old mudbrick house on the outskirts of Lauder. Continental breakfast provided.

Cycle from Lauder to Omakau (7km). Lunch at Omakau Commercial Hotel backyard, and a sidetrip to Ophir if weather is good. Accommodation at Omakau Commercial, an old creaky building you’ll either love or hate for its historic quirkiness. We loved it. Continental breakfast provided.

Cycle from Omakau to Alexandra (30km). Lunch at Chatto Creek, a wonderful place to relax and for kids to play. Accommodation at Mirabell Chalets which has standalone cabins at a family orchard on the outskirts of Alexandra. There’s an in-ground swimming pool, and a washing machine for dirty laundry.

Cycle from Alexandra to Clyde (8km). Drive the car to the maze at Orchard Garden Cafe, followed by ice cream at Monte Christo Raspberry Cafe. In the afternoon, drive the car to Lake Dunstan for a swim. Accommodation at Clyde Holiday Park: very basic cabins which stay uncomfortably hot on summer nights!