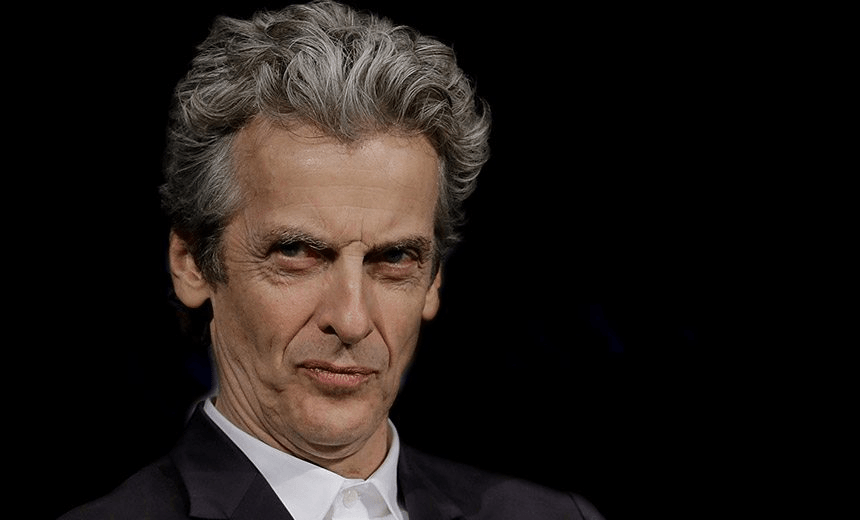 Farewell to the brows: Why Peter Capaldi was the coolest Doctor

Peter Capaldi, the 13th person to play The Doctor in the BBC’s Doctor Who, has announced 2017 is his last year as a Time Lord. José Barbosa assesses Capaldi’s tenure in the role and offers some pleas for the next incarnation.

“Everything ends and it’s always sad. But everything begins again and that’s always happy. Be happy”

It’s a testament to Capaldi’s powers that this leaden piece of dialogue (written by Who showrunner Steven Moffat for the 2016 Christmas’ special ‘The Return of Doctor Mysterio’) was transmogrified into something genuinely uplifting on being expelled by the Scots actor’s lips.

By contrast, the following speech by the otherwise excellent Matt Lucas sinks like a stone.

The lesson is clear: in a lot of TV sci-fi you have to be really really good to not sound like you’ve just swanned in for a Countdown Xmas TV commercial voice over – “’twas the night before Christmas and all through the house, were great savings on shaved ham and pita pockets, it was totally grouse.”

Peter Capaldi as the Doctor was very very good. He was possibly the coolest doctor ever – part of that was his established career (the apex of which must be The Thick Of It) and the fact that he seemed to turn the character’s long standing humanism on its head, occasionally appearing to not be too fussed with the well-being of people around him. Of course, when it came to the rub Capaldi’s Doctor was just as concerned with life and liberty as any of his previous incarnations, but somehow it seemed more real. Perhaps it was amplified in contrast to his crotchetiness.

You also got the sense that this Doctor was off his fucking rocker. All the doctors have been kooky, but the 12th could be properly maniacal. There’s been times when Capaldi’s slammed the accelerator down hard on TARDIS, his eyes bulging like cartoon daggers, a phalanx of teeth bared and you just know he’d fly into the sun, extinguishing it through pure hate alone. Tennant could be intense, but Capaldi in his most vehement scenes was a shot of battery acid.

Capaldi, along with Moffat, is part of modern Who’s success. The show is one of the BBC’s cash cows, an even more important one after the departure of Top Gear’s hosting team, and it’s milked accordingly with merch and spinoffs and merch. With that comes Capaldi’s inevitable press commitments, more and more of that necessitating foreign travel as it gets more popular in the US and elsewhere. I don’t know if Capaldi really enjoyed that part of the job. After interviewing him during a 2015 visit he admitted it was a joy to talk about a range of different subjects that weren’t Who. It appeared as if the grind of being asked the same questions all the time was beginning to tire him.

Yet, he seemed to enjoy hanging out with fans, I still can’t get over how nerdy he is in this fan club video, rattling off a list of made up species when asked who his favourite Doctor Who villains are.

And anyone who makes a video for a nine year-old fan with autism upset by the death of his grandmother has a pretty big heart, I think.

But it’s more than likely that working on a show that important to the company’s bottom line comes with all sorts of irritations, probably management based. In his on-air announcement that he was leaving the show, Capaldi (sounding somewhat in tears) thanked the BBC for showing “so much kindness” to him and the production. Yet, 10 months earlier he was dressing the Beeb down in public for “not looking after the show.” If hard nut Christopher Eccleston couldn’t handle management malarkey, how could Capaldi?

Still, that’s all speculation and I’m sure the BBC would rather us be speculating about the next actor to play the Doctor. The regeneration of the character is its own baked-in publicity generator. It’s genuinely fun and the BBC plays up to it, even shouting a whole prime time show to announce Capaldi as the 12th incarnation.

There are more important things to wish for right now, mainly clustered around some kind of rationality from our elected leaders, but it doesn’t seem wasteful to expend some slivers of hope that the next actor to play the Doctor won’t be white or male. Representation matters. I’ve been seeing people who look like me on TV all my life; it’s time for someone else to recognise themselves in their hero. For a while Capaldi was mine. Let’s hope his last year is as epic as those eyebrows.