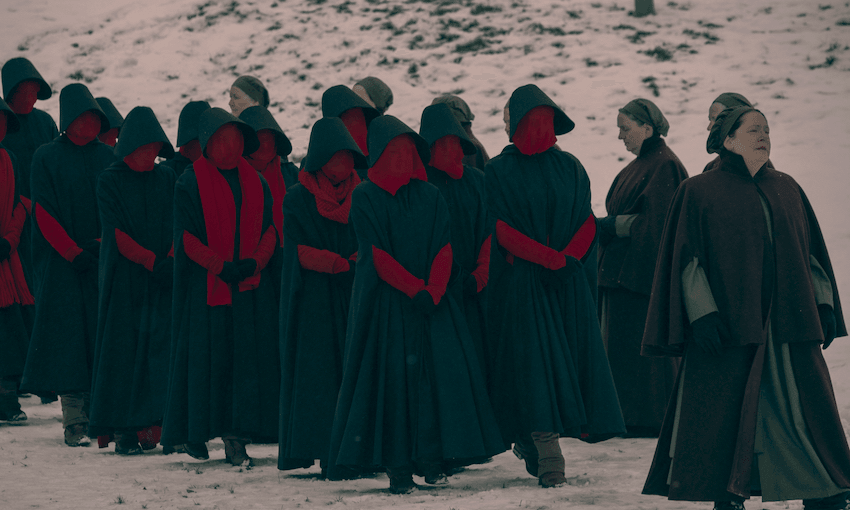 The Handmaid’s Tale recap: A crimson coffin for your sins

Tara Ward recaps the seventh episode of this season of The Handmaid’s Tale, which shipped her and her emotional stability off in a crimson coffin.

Ship me off to the colonies and throw me your smallest shovel, because I am of no use to anyone after that episode of The Handmaid’s Tale. It had everything: tension, dread, horror and triumph. That’s right, triumph. Episode 7 stood out like a crimson coffin on the pure white snow, because June claimed several small but significant victories. She said her name. She picked up a pen. She pashed Nick while guards stood ONLY METRES AWAY. The resistance is coming. I am wrecked, but June has only just begun.

But let’s begin with a mass burial of dead handmaids, because that’s how Gilead rolls. Build ’em up, leave ’em hanging by the gutters. In a hauntingly beautiful sequence, the handmaids donned black capes and red veils to farewell the victims of last episode’s bombing. “In their names, we will remember them,” Aunt Lydia wept, but I’m calling bullshit on that one. They were buried as Ofryan and Ofleo and Omfg, because even in death these women belong to someone else.

The effects of Ofglen’s bomb rippled through Gilead. Commander Waterford barely survived the blast and lay half dead in hospital. Serena knew she’d be up shit creek without a cattle prod if the Commander carked it, while June was scared witless by creepy Commander Cushing. He ordered June to spill the beans on who helped her escape. “You can trust me,” he told her, as every single cell in his body blatantly screamed “I AM SLIMIER THAN MY HAIR SUGGESTS, NEVER TRUST ME”.

The explosion took out 26 Commanders and 31 Handmaids, aka a whole lot of precious sperm and wombs. Supplies were low, so Janine and Emily were recalled from the Colonies like fertile athletes coming off the bench to save the game. Fresh legs, fresh vessels, blessed be the fruit. They were reunited with June at the supermarket, where the emotions flowed like that radioactive sludge they’ve been digging up for the past six episodes. Sometimes I bump into old mates in the biscuit aisle, but they almost never react like this.

Their reunion sparked an act of rebellion so magnificent I punched the air in celebration.  “My name is June” June told Emily, kicking off an unexpected game of noun dominoes. One by one, amid the garlic and bread sticks, the Handmaids uttered their names to each other. It was like one of those icebreaker exercises you’re forced to do on team building days at work, except this was empowering and liberating.

We’ve waited 17 episodes for this moment. I was here for every single name, every single woman. I was David Hasselhoff in a spangly denim jacket looking for freedom. “Tear down that wall!” I shouted as the glorious whispers of “Alma” and “Dolores” and “Brianna” echoed around the market. I may have even shouted my own name. I seem to shout a lot during The Handmaid’s Tale.

The other handmaids got their names back too, read aloud during a post-bombing press conference in Canada. Luke and Moira listened for June’s name, and flashbacks revealed more about Moira’s past. The discovery that Moira hates white wine shook me the most, until she found photos of her fiancé Odette in a folder called Dead People Not In Canada or something. Moira cried so hard, no noise came out. Samira Wiley is brilliant. I’ve totally forgiven her the white wine thing.

Back in Gilead, Serena performed her own act of rebellion and issued government orders in the Commander’s name. Smell you later, Cushing. Serena bloody loved the feeling of sitting at the Commander’s desk, and I bet when no one’s looking she spinned round in his fancy chair and made a tiny “weee” noise. Dystopias come and go, but the fun of a spinny chair never leaves you.

But Serena’s wasn’t done yet. She invited June to join her alliance of one to outwit, outplay and outlast the patriarchy, by editing the forged paperwork that would ease restrictions in Gilead.  She gave June paper. June chose a pen. Serena, I think I love you.

I know this will backfire like Commander Glen’s car that time Emily went rogue in the farmer’s market, but it’s a victory all the same. Just as Ofglen pushed the button on the bomb, June pushed the button on her own loaded weapon. Hang onto your hoods, the world’s about to explode.