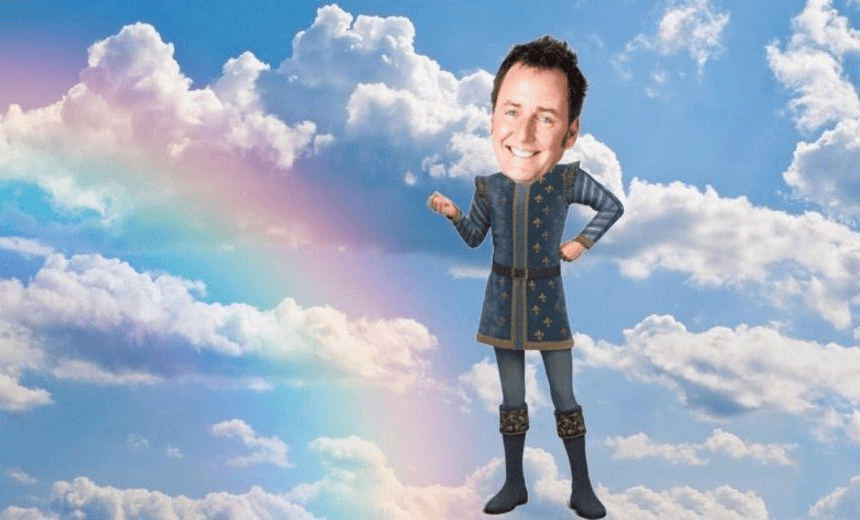 By Katie Parker
Guest writer
Made possible by

For today’s short memories, Mike Hosking is but a beloved national icon, speaking truths and setting fashion trends. But not so long ago, he fought a bitter, brutal war to change privacy laws in New Zealand forever. Click here for the rest of our Hosking Week content.

Once upon a time there was a man called Hosking. He was not a handsome man, nor a clever man. But he was a man of dignity. Of celebrity. Of the hallowed world of local New Zealand media. A pillar of the community, one might say.

One day, the Hosking man and his kind, gentle, beautiful wife, were delivered a very special gift. Twin girls as sweet and pure as the driven snow! The people rejoiced.

But dark, damp, stormy clouds were brewing and just a year later the man and his pretty, cheery, benevolent wife separated, tearing the small family to shreds.

The people were shocked. The people were saddened. Most respected the Hoskings and their undeniable, but sadly unlegislated right to privacy. Most, but fatefully not all.

One day, as the tender, effervescent and tragically estranged Mrs Hosking was humbly running errands with her two baby girls in the charming Newmarket precinct, a vile thing happened: Lurking in the shadows was none other than notorious paparazzo Simon Runting.

Commissioned by dastardly women’s rag New Idea to document the couple’s first Christmas apart, there he was: leering, lecherous and with a heart as dark as coal. Click! Flash! Zazz! Unbeknownst to her, poor, angelic Mrs Hosking along with her innocent infant twins were snapped.

But Hosking and Mrs Hosking were not to be crossed, and when they were notified of the existence of the photos prior to their publication they were furious. “Over my dead body!” cried Hosking, his eyes stinging with salty tears*, the barely crusted scabs of his broken family scraped painfully raw once more.

United once more by their newfound bond of hatred, Hosking and Mrs Hosking lawyered up, and to the high court they trotted to seek an injunction.

Judge Randerson, the cad, would not grant them one. You see dear reader, there was a glaring oversight in New Zealand’s privacy laws, one which failed to protect even the privacy of babies.

Weaved of self-regulation, regulatory bodies, the 1993 Privacy act and common law torts, privacy law in New Zealand may be a colourful tapestry, but one with many holes and snags. And with the photos taken in a public place, thus no reasonable expectation of privacy, nothing could be done for our brave hero.

Hosking – good, honest, decent Hosking – was aghast. Never mind that New Idea had relented and, cowards as they are, resiled from their intention to publish the photos. The issue had become so much more than that. Hosking had to make a stand. “If not I, then who?” he bellowed*.

The next stop was the Court Of Appeal. They too deemed Hosking’s complaint legally ‘blah’, and shook their sorry heads dolefully.

HOWEVER: The court of appeal were sympathetic to Hosking’s plight and by majority recognised the existence of a tort, barring wrongful publication of private facts in New Zealand.

As such the decision was made:

There are two fundamental elements for a successful claim for interference with privacy:

But wait: there was more!

The ruling left the door ajar for the incremental development of further causes of action protecting privacy. In its review of privacy law, the Law Commission also recommended that the tort of invasion of privacy be left to the Court to develop.

Of course this was all a long time ago now, and you youths with your Kanye West and your Poke-mongo may never know.

But Hosking – noble, honourable, selfless Hosking – has not forgotten, and just last year he reflected on his victory:

“Not only had I done something for my kids, I’d done something for a lot of kids. And in that is the critical point. By having no real privacy laws, there has never been any delineation between public figures and non-public figures so the media have been able to get away with the most appalling behaviour simply by arguing the photos were taken in a public place, and that if you’re a public figure then all around you must fall into the same category.”

Hosking may have lost the case, but by sticking to his guns and fighting the good fight, he made a significant contribution to the war and demonstrated once more his deep concern for the young.

Now you could argue that with the time, money and power this all took, one could have achieved more for children. ‘Child poverty’ you ask? ‘Housing shortage’ you query? ‘shocking  health statistics’ you ponder?

I pat you numbly on the head: What good are things like food, and well being and adequate accommodation without the privacy to enjoy them? Riddle me that, dear reader.

Though Hosking and the striking, thoughtful, vivacious first Mrs Hosking never reconciled their differences, love was not done with him yet and in 2012 he was wed again. With two beautiful daughters over whom to fawn, a sparkly new wife with which to nest, and the unbridled adoration and appreciation of the nation, Hosking lived happily ever after.