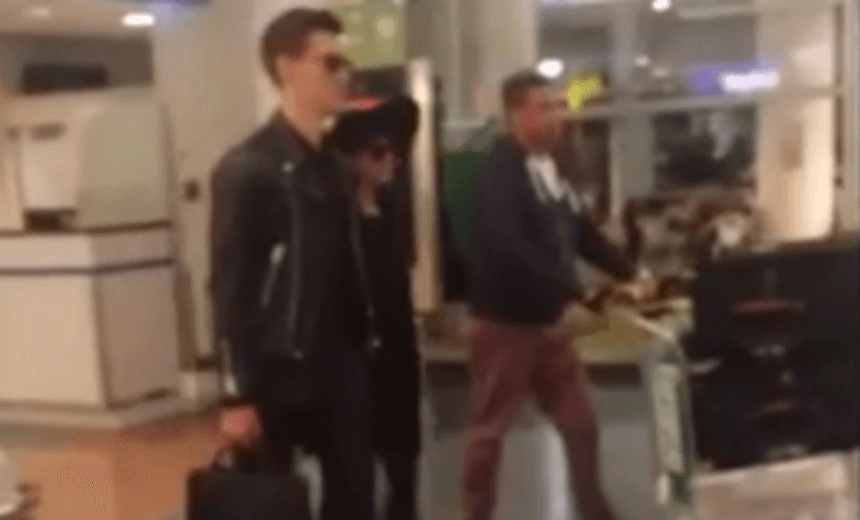 After the terrifying tirade that made our top TV moment of 2015, we thought it would be fitting to revisit Don Rowe’s report from Auckland airport as he watched Willy Moon and Natalia Kills leave the country.

Like great dark bats they swooped through Auckland International Airport. He wore leather and she sheltered beneath a wide-brimmed hat. Both wore sunglasses. They walked with straight backs and narrow mouths. An airport lackey in white shirt and blue tie pushed a three-wheeled trolley beside them, loaded with immaculate baggage. The press (myself and a Fairfax photographer) had been waiting hours for this one moment. We closed in.

“Natalia,” I asked, “Do you think MediaWorks has treated you unfairly?”

“Willy, will you ever come back to New Zealand?”

How could this be? Joe Irvine, a guy so sweet he inspired Lorde to bake cupcakes, whipped the pair into a narcissistic lather just by wearing a suit. I couldn’t even get a “no comment” at a secret airport ambush. They didn’t even break their stride, or hiss a good swear word. What was going on behind those sexy dark sunglasses? I took a crafty angle to cut them off as they passed, but my path was blocked.

The security guy had been watching me for maybe four hours. Security guards across the world have an instinctive dislike of young, bearded men, and staring at people, talking to myself and scribbling frantic notes on the floor of an international airport terminal, I might have even looked a little bit suspicious. But this was his moment of vindication. After all, the couple he guarded have gone from nobodies to global pariahs over the past couple of days.

After 77,528 people on change.org voted Willy Moon and Natalia Kills off the X Factor, 3 News dropped them faster than you can say Stan Walker. The online lynch mob frothed ecstatically, farewelling them with their best insults: “Fuck off,”, or “Take that ya fucken slag!!!”. The pair were probably in actual physical danger, such was the heat around them. In secret, they made preparations to leave. But nothing in Auckland is really that secret, and word reached The Spinoff of a planned break for the border.

Several hours later I sat drinking Mac’s Gold in an upstairs bar, eyes on the departure gate. My eyes glided across the selfie sticks, travel pillows and teary relatives who milled about. Bubbly blondes in harem pants and headphones rolled past in endless deja vu. Apparently it’s compulsory to travel in harem pants if you’re a woman between the ages of 15 and 25 at the moment or something. I checked my phone. 5.30pm. There were three flights leaving for America last night between 7 and 10.45. The first, at 7.25, went to Los Angeles. The second, at 7.40, to San Francisco. We were confident the pair would be on one of those flights. They would have to make an appearance soon.

45 minutes passed, my beer ran out, and still there was no sign of public enemies number 1 and 1A. I joined the crowd staring up at the departures board and thought that if everyone could just look at a departure board for ten minutes every day, smartphone-neck might never have become a medical condition. Check-in had closed for both the 7.25 to LA and 7.40 to San Francisco.

The basic assumption that time runs linear and constant is proven entirely false within the confines of an airport. Under the harsh fluorescent lights it becomes like a syrup and drops by in great dollops. Five minutes staring at the wall lasts an hour, but even the most slowly chewed cheeseburger is gone in an instant. I watched flight after flight after flight of backpackers and businessmen go by. Leaning against a stall that sold exclusively phone chargers I saw an Asian guy wearing maybe seven or eight shiny plastic chains and three sets of dog tags. A guy argued with his mum and an old lady with purple hair smiled at a kid running past.

Eventually, I noticed a guy carrying a camera like a real photographer, fixated on the same door I had been watching, directly in-front of the check in. “I think you’re here for the same reason I am,” I said to him. He said he was. We talked for a while, trading war stories and our expectations of what it might look like when Moon and Kills arrived. I didn’t say it out loud, but I wondered if maybe this guy would be taking pictures of a pair of beautifully dressed corpses in a couple of hours. Would the crowd fall on them like frenzied beasts, tear them limb from limb and paint this terminal with blood? I hoped not. That’d be a bit excessive.

“Apparently on Stuff they got as many views about this X Factor controversy as they did during the Christchurch Earthquake,” the photographer told me.

I said that fame is the same thing as notoriety, and maybe their careers would benefit from this whole thing. “I’d say so,” he replied.

We sat on a pair of coin-operated massage chairs and waited some more. My mouth was dry from the beer I drank earlier, but I couldn’t leave my chair; an Indian girl had been eyeing it up from her seat on the linoleum floor. I made a break for it, slurped a few sips, and she took it. Cold as ice. It was a stroke of luck in reality, though, because leaning against a wall next to the Air NZ Premium Departure Lounge, I overheard a hushed conversation between a guy in a suit and an airport worker in a white shirt and blue tie.

“Take a trolley, head down to door 12 and meet them there. Bring them down here quickly.”

They had arrived. Who here would cast the first stone? Some European guys with a bag of fruit were reorganising a suitcase. A family of Asians watched a baby dance in light-up shoes. An elderly lady filled out her departure card, grumbling to herself and peering through reading glasses. Not very threatening, but passion can be dangerous even in the frailest of bodies.

In the end, the biggest hindrances to Willy Moon and Natalia Kills leaving the country were probably the tightness of his pants and the height of her heeled boots. Heads forward they strode briskly down the terminal like Mr and Mrs Severus Snape. Deaf to my questions, they stopped for nothing. After arriving in a blaze of publicity all those months ago, they were slinking off in the dead of night.

The flash of a single camera bounced off their glasses, his like Lennon’s, hers like Kim K’s. Into the check-in lounge they went, as if it were the lobby of a fine hotel. Nobody screamed, nobody shouted. Nobody clawed at their faces, hissing and raving. Aside from the security, nobody even really said anything besides a couple of girls.