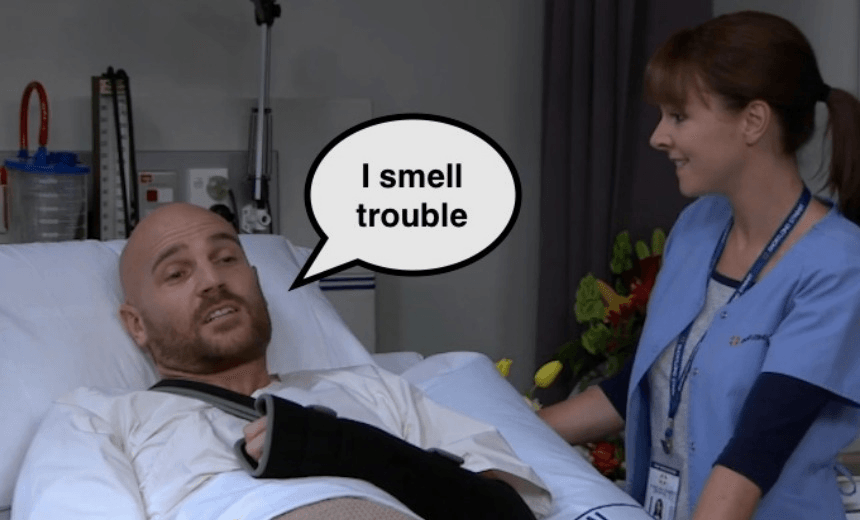 1) Wendy sails into the west

Grab the tissues and the smelling salts, peeps, as we say a final farewell to Wendy and Len. A bumper crowd of approximately fifteen people gathered at the local boat club, a kind gesture given that they’re probably still fundraising to fix the damage Wendy caused when she sailed into the jetty. Murray gave a cracking speech in tribute of the love of his life. “You made me a better man, and the world a better place.” (Apart from the marina, eh Wendz?)

Murray’s speech was heartfelt, but nobody said it better than the Spice Girls when they farewelled their own ginger matriarch. “Goodbye, my friend/It’s not the end/So glad we made it, time will never change it no no/No no no no noooo.” Now that’s emotional.

2) Margaret is going down

At last, the truth is out. Margaret’s hand-knitted cardigan of shame and deceit snagged itself on a nail of truth and began to unravel at a dizzying speed. Victoria dobbed Mags in to Rachel, Drew remembered she’d been robbing him blind, and before you could say “solitary confinement” Mags was locked up in the slammer. Margaret cried, Mo was sad, Jack bewildered and Curtis furious. Just another week for the Hannah’s, then.

3) George raises his voice and reveals himself

Shut the front door, Dripface George finally did something. In a rare moment of animation, George leapt to the rescue when Jasmine fell ill. “She’s tachycardic! And febrile! Not good!” he said in a medium to loud voice. Jasmine was diagnosed with Yellow Fever, thanks only to George’s superior medical training.

“I spent some time in an infectious diseases clinic in London,” he whispered. “Then I lived in a tiny, windowless cave for several years where I discovered the cure for cancer and worked out how they put the stripes into toothpaste.” So how come he’d rather work as a labourer than a doctor? Something smells fishy around here, Dayna, and it’s not the IV lunch special.

4) Victoria: the bitch is back

Victoria has the best Resting Bitch Face since Dr Mackenzie Choat walked the streets of Ferndale. Not only did Victoria throw Mags under the bus – she warmed the engine, took the handbrake off, and set the radio to The Edge. “If there’s anything I can do…” she cooed at Mo, giving him her fiercest bedroom eyes. Terrifying.

5) Lucy wins the Nobel Prize after she successfully clones herself

Lucy is a freaking genius. This week she cloned herself to be in two places at the same time, attending Wendy’s funeral while working at the hospital. Stop with all the dangerous science, Lucy, before Boyd discovers you’ve been pissing about with his 3D printer.

6) TK remains confused by the complexities of the modern world

Poor TK. In a world bursting with fertile, fecund women, he had to go and fall in love with one in control of her own fertility. Damn the sexual revolution! He struggled to understand why Kylie – with a womb ripe and ready to yield a tribe of little TK’s – doesn’t want children. Or does she? One too many chardy’s saw Kylie boast “I CAN STILL CONCEIVE WITH ONE FALLOPIAN TUBE”, ensuring Wendy’s wake was both cathartic and educational.

“Don’t be whatever it is you’re being!” Drew dribbled nonsensically at Harper as he negotiated the Krypton Factor obstacle course that is his love life. So many women, so many problems, and this was before ol’ stinky McKenna caused a shooting flashback. Drew’s hypersensitive olfactory gland deduced the shooter wore the same expensive perfume as Rachel: Valkyrie, an earthy aroma of damp battlefields and lightning bolts. I’m picking this isn’t Curtis’ signature scent, so which one of Drew’s strumpets is the shooter?*

Harper’s plate of beetroot and red onion looks delicious, doesn’t it? Chris, you made that dish your own. Anyone for takeaways?

As the police inch closer to identifying Drew’s shooter, Ferndale remains a hotbed of chaos and drama. Will the missing security footage be pulled from the bottom of the Ferndale sluice pond? Will Harper and Drew stop looking pathetically at each other and just pash? But most importantly, will Chris gain confidence as he works his way up to serving the judges steak tartare and crème brulee?