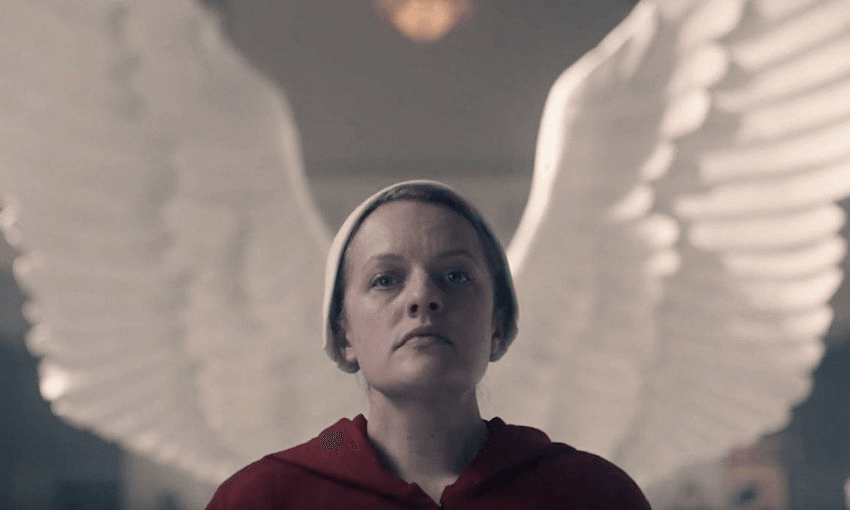 The fightback begins: What we learned from the new Handmaid’s Tale trailer

A close reading of the brand new, oddly hopeful trailer for season three of The Handmaid’s Tale.

The latest trailer for the new season of The Handmaid’s Tale got me so excited that I inhaled half a pack of Chocolate Finger biscuits in approximately ten seconds. Then I felt bad because Serena Joy had a finger chopped off at the end of last season, and maybe I was just flaunting it in her face. Waterford is such a shit, he’s ruined both women and chocolate biscuits, forever.

Fingers or no, this trailer raised a lot of feelings. It was two minutes and ten seconds of light and hope, of rebellion and resistance. There was talk of hope and power and survival. This was some mood, and I came over all excited just like the time June heard Oprah’s voice on the car radio when she was trapped in a deserted house in a forest covered in three feet of snow and about to give birth with only a lone wolf for company.

These are not reactions we’re used to having about The Handmaid’s Tale. Where’s the doom? Where’s the dread? This teaser is probably full of red flags and trickery that will have me crying into my empty biscuit wrapper when the season premieres, but I can feel in my dystopian waters that things are about to change in Gilead.

This is the beginning of the end, friends. The clock is ticking, and June’s about to give birth to a revolution. I once gave birth to an 8 pound baby and that hurt a lot, so if June has to push out a political rebellion capable of overthrowing an evil authoritarian political regime, it’s really going to take a toll. We’re all going to need a lot of drugs, is what I’m saying.

But I’ll be here for every goddamn twinge and tightening until whatever June’s got brewing under her cape is revealed in all its game-changing brilliance. This trailer promises it’ll be worth it, so hang onto your bonnet, and blessed be the fight.

Here’s what we know about Season 3 of The Handmaid’s Tale so far.

There is hope in Gilead

There’s light, there’s sunshine, the orchids in Serena’s greenhouse have probably gone batshit crazy from all the optimism. June’s not taking this shit sitting down any more. She looks happy! This has to be a trap.

But also, June is pissed off

True to form, Aunt Lydia bounced back like a dystopian rubber ball after Emily stabbed her in the back and kicked her down the stairs at the end of last season. Is Aunt Lydia unkillable? Is her carcass made of stainless steel? Seems likely.

June and Nick are still on like Donkey Kong

“What’s a nice girl like you doing in a place like this?” Just quietly planning a revolution, please and thank you.

June is gathering her squad

Blessed be the fruit. Last season’s finale showed June how powerful a silent, backyard resistance can be, and it seems she’s determined to crack Gilead wide open from the inside.

“If I’m going to change things, I’m going to need allies with power,” she says, and we see the faces of Nick, Aunt Lydia and Serena Joy. Love the concept, but I’m not sure about the team June handpicked. I mean, Serena can’t even turn her back on cigarettes, how can she secretly go against the fundamentalist political regime she helped create?

Wait, is this the “treason and coconuts“ guy from last season?

This. Is. Amazing. Just a casual poolside cigarette while two oppressed gal pals plot a political coup, no big deal. Taking back the power, one pool lounger at a time.

Be right back, just bawling into my bonnet.

SEE, I TOLD YOU THIS WAS GOOD.

You can, as always, watch The Handmaid’s Tale on Lightbox right here. Season three starts on June 6.