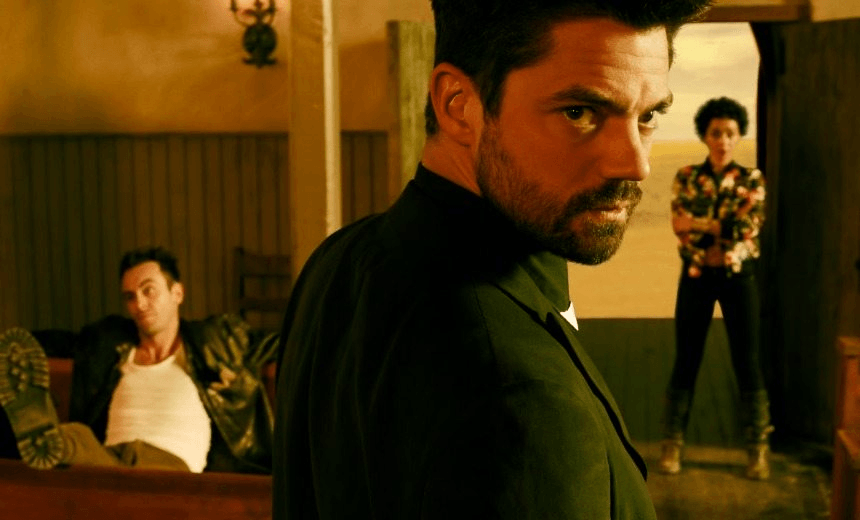 By Liam Fernandez
Guest writer
Made possible by

Many years ago I was recommended a comic book by a friend. I had just finished reading Watchmen, and given the lofty bar that Alan Moore’s layered alternate history tale had set, my next foray needed to be pretty darn good.

When my friend handed it over, I took a moment to scan book one’s glossy cover, where a sinister man donning a holy dog collar surveys a flaming church. That was enough for me.

What unfolded was a tale of adventure, discovery, and brutality – topped off with a touch of unexpected sexuality. How could a man of God act so unholy? The Preacher world is full of wonderful weirdos with perpendicular values, but that was all part of the allure. It’s like having your very own circus lying on your bed-side table, each issue introducing you to the bizarre and twisted world of a horrific and supernatural western.

Preacher broke tropes that had been long entrenched into my youthful expectations of what pop culture was supposed to be. Reverent Jesse Custer isn’t the wise old soul, that you might expect from a man of the cloth. He himself is the protagonist – a flawed hero who is both likeable and detestable for a variety of reasons. You delight in him for reasons you really shouldn’t. Much like a lolly that’s fallen on the pavement, you know you should just walk away… but you can’t.

The other characters are authentic and strangely loveable. None more so than Cassidy – a hard-drinking-no-good-schemer who’s incredibly charming, most often unintentionally. If he finds inspiration he’ll rip your neck out if he’s not preoccupied by looking for life’s answers at the bottom of a bottle. I suppose if one were so inclined to mix Mickey O’Neil from Snatch with Heath Ledger’s Joker The Dark Knight, there’s a good chance you’ll end up with something fairly close to Cassidy. Oh yeah, he’s also a 114 year old vampire.

After having a love affair with the comics from the second half of the 1990’s, I must admit I was a touch apprehensive when I heard that it was heading to the small screen. On one hand, there is a fear that an adaption unworthy of one of your first loves will ever match up to the strength of the original, and on the other hand, there is also the fear that the slim possibility of a faithful and worthy adaption will end up never seeing the light of day.

It’s kind of like that joke in Annie Hall, when Woody Allen’s character, Alvy Singer, addresses to camera: “There’s an old joke… two elderly women are at a Catskill mountain resort, and one of ’em says, “Boy, the food at this place is really terrible.” The other one says, “Yeah, I know; and such small portions.” I have to say, after watching Preacher, that my reservations have been laid to rest. This southern fried buffet is satisfying and the portions are generous.

The modern concoction which Seth Rogen, Evan Goldberg, and Sam Catlin have developed is both faithful yet fresh. This is by no means a direct copy from page to book. There are obvious choices made which flip expectations based on what the original print edition offered. Early on in the comics, when we are shown what Jesse Custer was up to before the present moment, he has shorter hair – high on the top, with short back n’ sides. In the present, his hair is much longer and just a little curly.

In the TV adaption they reverse this. Custer (Dominic Cooper), has shorter hair in the present and had longer locks in the flashbacks. Just like most of us in the 80’s.

While I do miss Jesse’s striking white suit, other significant details include Tulip O’Hare’s altered ethnicity. The comic book depiction shows an erratic, vulnerable and emotionally unpredictable blonde white woman, but the AMC rendition presents a badass, strong African-American woman. Is this change just an organic coincidence? Or is Tulip’s new incarnation an intentional decision to promote strong female characters and ethnic diversity?

Sheriff Hugo Root, played by W. Earl Brown (Deadwood), is unfortunately far less mean-spirited than in the original. He plays a significant role early on in book one of Preacher: Gone to Texas, kidnapping Tulip and coming into conflict with Jesse, Cassidy, and the Clint Eastwood inspired Saint O’ Killers. On the tube, Sheriff Root is no longer the drill-sergeant style authoritarian iron-fisted hick which is a bit of a shame, and there is no sign of him blaming America’s woes on “martian n-word’s”. Now, he is loosely portrayed as incompetent, disinterested, and largely ambivalent towards his local law enforcement responsibilities.

As I write this, season one has come to a close. While there has been relatively nothing of the Seraphi (archangels) and little yet in the present of the invincible bringer of death: the Saint of Killers, there is, of course, room for more in subsequent seasons. As with many television series –and many comics – patience is often key. No doubt though, further devilish introductions are indeed on the way. With a large serving of twisted trimmings in the first season, my last remaining hope is that AMC don’t hold back on the depraved hot sauce, especially when we eventually get to meet Jesse’s lovely kin.

Click below to watch Preacher season one, exclusively on Lightbox today: