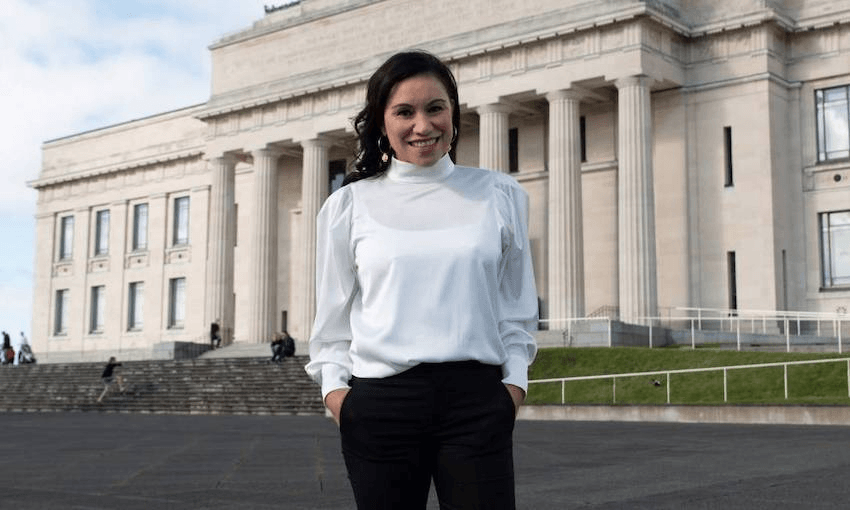 Review: National Treasures is a moving celebration of the objects that made NZ

Real people’s stories are at the core of this TVNZ series about ‘the wonderful, hidden and controversial objects’ of recent Aotearoa history, writes Alex Lodge.

Manaakitanga is really what separates National Treasures, hosted by actual national treasures Scotty and Stacey Morrison, from a static museum collection of objects. It’s been carefully curated not to be too heavy in any particular direction or agenda, making for moving, thoughtful and sweet edutainment. Each object is presented by a person who is personally connected to it, in conversation with an expert. The objects span from standard “kiwi nostalgia” fare (the history of the bungee jump, costumes from Gloss) to the deeply personal, such as the diary of Maggie Papakura, the Whakarewarewa guide, Oxford-educated academic and all-round trailblazer.

In the opening sequence when this more personal section of the show was introduced, I instinctively cringed as Stacey Morrison narrated that “pieces you’ve brought to us will be evaluated by our panel of experts”. I had visions of Antiques Roadshow-style heartbreaking interactions where hopeful people bring along their treasured family heirlooms only to be told on camera by some pompous haircut that, sorry, I’ve evaluated this and it’s only worth $10.

Thankfully, this is not that kind of show. The panel of experts have to be commended for the care they take with their guests, never pushing them into tears or drama. The conversation can remain around the object as much as each guest likes, or they can share their own story if they like too. It’s a conversational, warm environment that makes the show feel both contemporary and capable. We know we are in safe hands, complete with white curator gloves.

Each episode follows a wide span of interests, so there is something for everyone: sports history, technology, music festivals and political movements are all covered equally. There is also at least one major disaster or tragic event from history covered, which is always handled with care and a gentle optimism. One of the most surprising sequences for me featured John Archer, who was 12 at the time of the Tangiwai Disaster and lived nearby the wreckage. It’s an event many of us have heard referred to endlessly and it can seem like a distant part of history these days. John presents his chosen object as some memoir notes, which he wrote about witnessing the dead and their belongings washing up in the waters in the immediate aftermath of the crash. The notes eventually became his lyrics for the folk song ‘Pillows of the Dead’.

John sings the song in the episode, as well as sharing some of the backstory on its central image of the passenger’s pillows in the water (some of which were in fact, floating corpses). It’s a deceptively whimsical song, of a child trying to understand meaningless death and chaos on such a huge scale. So although the object is ostensibly John’s notes, it’s really the song which is the taonga, and having its creator sing it and speak to it is an extremely moving glimpse of living history. This is where the show really comes into its own – when the objects are simply conversation starters, to let the people themselves shine.

Often the most moving stories are behind quite ordinary objects – the soccer ball which belonged to a victim of the Christchruch mosque shootings, for example. But there are some dramatic accounts of heroism from our history too: the first episode features another national treasure, Oscar Kightley, discussing an object from the Dawn Raids era that is a part of the story I had never heard before. I don’t want to give spoilers, but will say it’s impossible to watch without getting emotional.

One notable gap in the portrait of New Zealanders that we see in National Treasures is that of Deaf and disabled stories. The linguistic oppression of New Zealand Sign Language is an often unseen thread of Aotearoa’s schooling history, and Deaf culture is a naturally visual world too. It seems like a missed opportunity, given that there has been a positive shift in agency and representation of people with disabilities in the past few decades that is worth shining more light on. The move away from a medical understanding of disability and towards the social model of disability has been crucial for the narrative of many New Zealanders’ lives – and honestly, everyone likes to look at old medical equipment. There’s no shortage of paraphernalia or stories from our disabled communities. It would be great to see this aspect of Aotearoa’s history and identity explored in any future seasons.

Other than that, my one negative piece of advice for viewers is: keep this show away from the hoarder in your life. It’s impossible to come away from an episode of National Treasures without looking at every object in your house in a more sentimental light. The afterglow leaves us as an audience considering our own role as kaitiaki of treasures and stories. This is the lasting impression of National Treasures and what makes it more of a contribution to legacy than just TV: it reminds us to not only look back, but also as to look around at the present moment and celebrate the living.

National Treasures airs at 8.30pm on Sundays on TVNZ1. Episodes are also streaming on TVNZ on Demand.