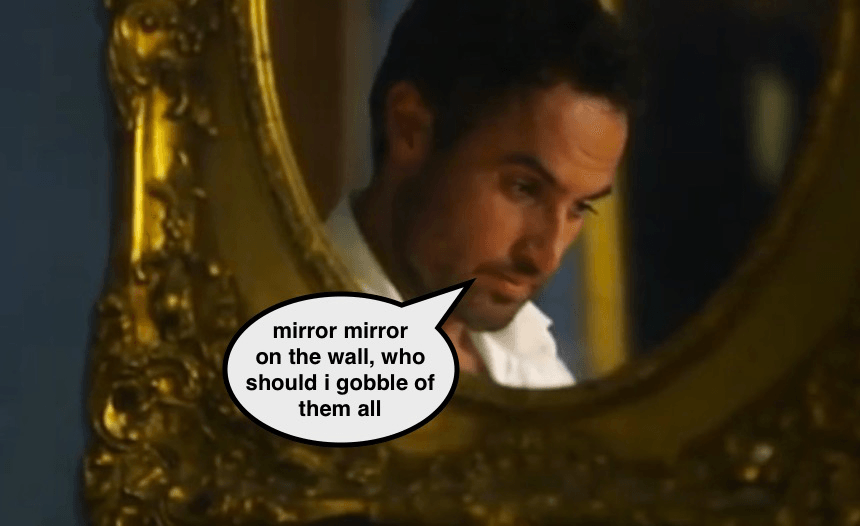 The Bachelor NZ Power Rankings, Week Nine – Who will Jordan gobble up?

Jordan was ravenous for love on the Bachelor NZ this week, overnighting with Naz and Fleur – but sending poor Erin home after she failed to notice he is physically indistinguishable from Aragorn.

It was all hometowns and fantasy dates this week or, as The Bachelor NZ likes to call it “terrible chat with a brother-in-law over a barbie and a sleepover in a scary glass room where the hills have eyes”.

We said goodbye to Erin this week as she caught a giant eagle thing straight to the fires of Mordor to melt her earrings and resell them for movie tickets because geek. Side note: Erin, I encourage you to see Captain America: Civil War and to deeply reconsider your stance on Spiderman.

It was always going to be Erin getting the chop at the final three; there’s only so long before the orcs of reality come crashing into the Helm’s Deep of Lord of the Rings banter. Before she got the boot for turning down Jordan’s overnight offer, she gave us this little nugget of mind-bending wisdom:

I’ll be thinking that one over for a while Erin, thou art as complex as yonder riddle on the door to Moria. What we can take away from this whole experience is that, alarmingly, all the free sausage rolls in the world can’t trump the want of the human heart. Erin’s mum put on the ultimate spread and sniffy old Jords turned it down in favour of a pile of chips and nuts (Fleur) and a single Lindt bunny in a bowl (Naz).

Talking of gobbling, what in Gollum’s name was Jordan on about here during this lad chat with Mike?

Is Jordan going to ACTUALLY EAT the winner? Only time will tell. I heard a story once about a girl who took her pet snake to the vet because it had stopped eating, and the vet told her that it was because it was preparing to eat her. All I’m saying is that Jordan hasn’t eaten any sausage rolls in a long time.

Anyway, there’s two left. Here’s my money (as in, I flipped a coin): 1) Naz This week we were treated to a world of opportunity with Big Nas and Little Naz, aka the siblings most deserving of a reality show since The Ingham Twins. The dudes sipped beers, the women sipped lattés, and this dude really wanted to gobble the bunny.

No time for chocolate now mate, you’ve got a bloody Bachelor to entertain

After getting a 90% pass rate from Big Nas, the pair settled into their fantasy date. From a Shotover Jet experience fit only for a woman traumatised by a horrible ocean disaster with her girlfriend when she was three, the pair settled into their glass house oasis in the middle of nowhere. “Even the floor is made of glass,” Jordan exclaimed, giving a thumbs up to the lurking possums beneath.

These two seem like they really, really like each other – especially if they can tolerate lying in long grass like that for more than 5 minutes. Could Naz be the winner? Or is she destined to sit at MOTAT like a beautiful mannequin until the end of time?

The Fantasy Suite is The Spinoff’s weekly podcast about The Bachelor NZ, hosted by Jane Yee with Alex Casey and Duncan Greive. Have a listen below, or download here on iTunes, or here on Stitcher.

2) Fleur Fleur was so excited for hometowns this week she just about burnt herself another Maasai marking. Unfortunately, she was way more excited about the new baby than she was about introducing Jordan to her family. Jordan was left in the corner, grinning in a private hell of his own creation.

He had poured his heart and soul into this visit, even learning a touch of Dutch:

The baby doesn’t know even a word of Dutch! The jealously for the infant’s attention spilled over into their fantasy date, where Jordan force-fed Fleur purée for Africa.

After a nice meal of mashed pumpkin, the ‘fantasy’ part of the date was looming over their heads. It was too much to take, and hard to resist ladling sexy jokes over everything they said:

Fleur might win, Naz might win, but I think it’s safe to say the only loser here is all of us.

I mean, that’s just a poo on a stone.