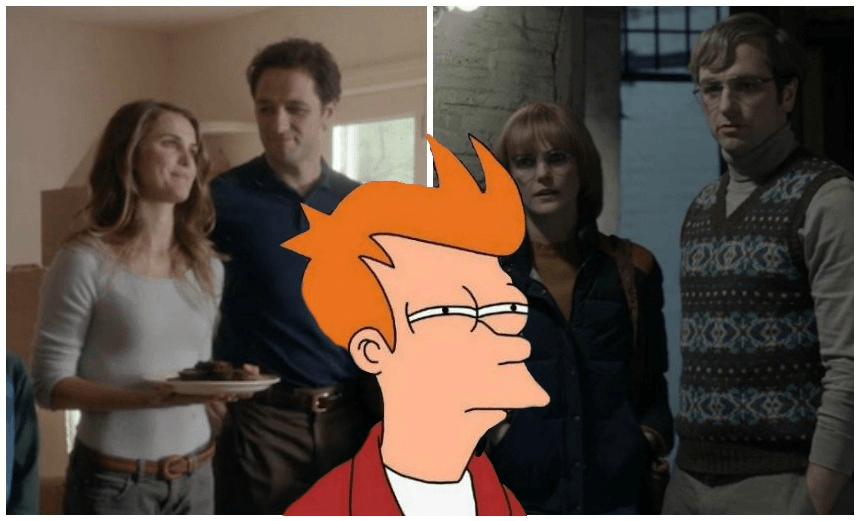 Why you should invite The Americans to your next costume party

Tara Ward breaks down the most memorable disguises from spy drama The Americans.

If you like your drama with more layers than a hot lasagne, then serve yourself up a giant slice of The Americans. Set in 1980s Washington DC, Elizabeth and Philip Jennings are your typical American family: two well-mannered children, a beautiful home and a successful business. They even find time to bake delicious chocolate brownies for the FBI agent who just moved in next door.

Ugh. The Jennings’ seem so nauseatingly wholesome I want to inhale that entire plate of cake until I fall into a near diabetic coma of disgust.

Hold the shoe phone, put away your secret bra camera, and look again.

Elizabeth and Philip are actually Nadezha and Mischa, Soviet intelligence agents posing as a married couple to spy on the American government. Beneath the chocolatey veneer of their everyday life lies a web of intrigue involving the FBI, the KGB, sneaky gadgets, combat fighting, bad driving and a fixer named Grannie. There’s a bloke locked in the car boot, Elizabeth has a crate of Kalishnakovs stashed in the woods and Philip likes to poison people until they do what he says.

That sounds cool, but the most awesome thing about The Americans is Elizabeth and Philip’s love of dress up. They never miss an opportunity to showcase their dazzling collection of greasy wigs, false moustaches and fake accents. It’s a wonder they’ve evaded arrest given they only have three pairs of glasses and two moustaches between them, but who wouldn’t want to be a spy if it means you can kick some arse in a bad perm?

It’s a joy to see the Jennings disappear into their KGB cocoon and metamorphasise into a bitter Vietnam vet with a mullet to end all mullets, or a clumsy student trying to poke an innocent bystander with her poisonous umbrella. If this is what they teach at Russian Spy School then I’m packing a suitcase of stick-on sideburns and booking a one-way ticket to Vladivostok, ASAP.

Theirs is a cloak of mystery that must be admired and emulated, so let’s dive deep into some of the memorable disguises of The Americans.

The anorak is to die for. Literally.

Is that Fidel Castro? No, just Philip wearing a facial hair ensemble to rival the awful Jamie Fraser Outlander post-Bastille beard, something I never thought I’d see again. It seems spy-related facial grooming was as bad in the 1980s as it was in the 1740s. Progress, you suck.

Whatever the hell is going on here

The ‘trust me, I have a badge’ look

I had a similar bowl hair cut in 1982, and can confirm it gives the wearer an air of authority and mystique. If only I’d had a badge, just think of the shit I could have pulled waving that thing around at Playcentre.

Purple and green eyeshadow, blunt fringe, shoulder pads a go-go. Oh, the 1980s, you were too good for us.

Don’t turn your back or one of these Elizabeths will stab you with her poisonous umbrella.

Someone call 911, this is a situation that even a wash and blow dry can’t fix.

Everyone loves a good wedding, and this one was all the better knowing that Deirdre Barlow was resurrected as a KGB sleeper agent.

Perm your wig, flex your eyeshadow palette and click below to watch The Americans on Lightbox