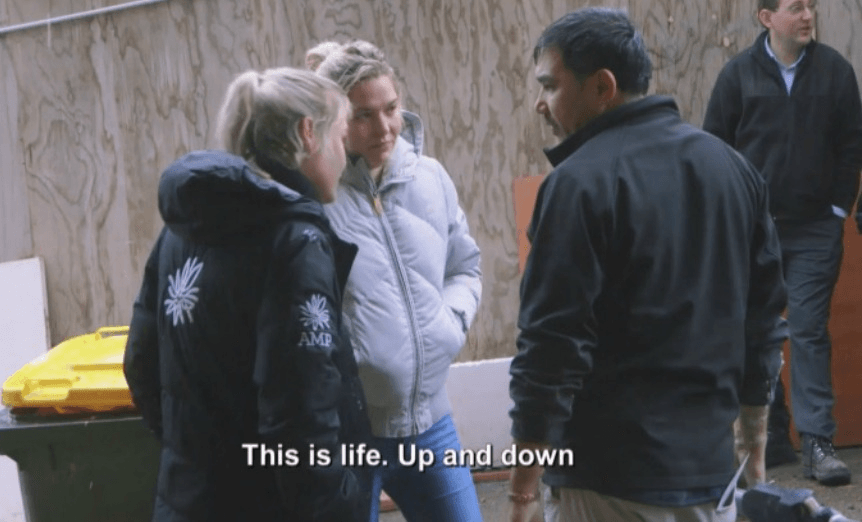 Jane Yee on The Block: A very bad week for the twins

Jane Yee takes a hammer and nails to week 10 on The Block NZ, including bum tattoos and twin peaks/troughs.

This is just one of the many lessons I learned during Entrance, Stairwell and Powder Room week on The Block, as well as the reason Andy and Nate put their hand basin in a wee nook outside the toilet room.

I also learned that even the mighty producers in the autocratic Mediaworks Capitol are not immune to an uprising from District Blizocky. During team judging this week the teams agreed to all score each other zero in an effort to prove they were not beholden to Block protocol.

In a season that has been punctuated by an unprecedented amount of strategic scoring, two-faced tactics and dodgy deals, it was bloody odd to see the teams linking arms and taking the high road to the scrupulous summit of Mt Self-Righteous.

Bonds were further strengthened as 75% of the contestants gathered at a tattoo parlour to forever ensure they remember their time in Northcote. The Twins opted out of the matching tattoos, presumably because a permanent logo on your bum isn’t the best way to forget this whole mess ever happened.

Matching tattoos are pretty intense, but things only got weirder from there. For one, the ‘Clear the Clutter’ challenge was inexplicably set to an instrumental rock version of ‘The Ants Go Marching One By One’.

Secondly, the Blockheads ridiculously suggested the Besties hand over their professional painters to Ling and Zing, because their house has street frontage and it would benefit all the teams. Stace and Yanita considered it for exactly zero seconds which was, quite frankly, a few seconds too many.

Finally, Julia and Ali were ordered off-site after buckling under the pressure of Block life coupled with a frosty reception on social media. This created a bloody ‘mare for production given the Twins were now at a serious disadvantage.

Room Reveal was pushed to Wednesday. It was a rough deal, particularly for the Besties and the HamDads who were the only teams to complete the space and therefore the only ones up for the win. When they expressed their discontent, Mark vomited up a cricketing analogy and barked “sometimes life’s not fair.”

I’ll tell you what is fair though, my Power Rankings.

Against all odds, Ling and Zing won the Clear the Clutter challenge and in doing so scored a free breakfast from Andy and Nate.

The lads managed to sink a few beersies in the middle of the Odd Jobs challenge and worked the whole sorry twenty-four hours to their advantage by swindling Stace and Yanita out of half their winnings.

Then Ling soft-hands-and-couraged his way to a plus-one victory during the Gamechanger challenge for crying out loud.

It seems the only challenge that was actually a challenge for the brothers was the week’s prescribed space, which they didn’t even come close to finishing. Just as they had accepted their fate of a failed week, it was like they fell down a drain and came up with a fifty dollar note as the room deadline was extended and they were back in the running.

I hate to bang on about it, but our hairy mates have got the best house on The Block. When you combine that with a week turned to gold, there’s really only one place for them on this week’s power rankings, and that’s at the top – even though I had conniptions watching them using metal utensils on a non-stick surface.

It was a tough start to the week for Steak and Cheese, who were still reeling from being disqualified at last week’s Room Reveal. The Palmy pair unsuccessfully appealed their case with the Wolf and then called in Coach Kane for some good old-fashioned blame deflection.

The scandal was soon forgotten when the Besties hopped into the Honda and set their GPS for the Grand Millennium. Steak and Cheese were booked into the biggest suite in the whole damn country because that’s legit how much extra room Yanita needs to accommodate her hair.

While at the hotel the pair enjoyed a delicious dinner in the rousing atmosphere of an empty teppanyaki restaurant and relaxed in a bubble bath with each other and a handicam.

The Besties were a couple of chilled out cats when they returned to The Block from their relaxing retreat, but that didn’t last long as the Odd Jobs challenge sent them flying into the pink portaloo for a good old sook.

Despite the woe-is-me-ing, Stace and Yanita went on to win the challenge after striking up yet another sneaky scheme with the Ings. They were also one of only two teams to complete the week’s space but, y’know, unnecessarily.

Not a great week for the HamDads. During the Clear the Clutter challenge Nate inexplicably traded away three hours of painting and a lovely sheepskin for a print that fell off the wall and didn’t remotely help secure the win.

In the same challenge he agreed to make breakfast for the Ings if they won (which they did) and thing just got worse from there.

Faced with the harsh reality of the Auckland housing crisis Nate was forced to sleep in the boot of their Honda for about thirteen seconds.

Andy broke a tooth on some particularly unforgiving nuts.

And all their dreams of a luxury rooftop spa were shattered when Pete laid down the Block by-law with bad newsy on the jacuzzi, and – unbeknownst to Andy and Nate – the Wolf twisted the knife when he accidentally handed over their house plans to the jokers next door.

Week ten was a shocker for the golden boys of The Block, but there was one good thing to come from a week the Dads would rather forget: I, for one, thoroughly enjoyed Andy busting out a high kick at team judging in a niche but brilliant nod to Starburst’s Little Lad commercial.

It was a truly shit week for the Twins. They lost their minds sleeping outside during the Odd Jobs challenge and that can’t have helped them deal with an onslaught of social media nastiness.

During that challenge they also met Annwynn, a lovely lady with terminal cancer who had a huge impact on Julia and Ali. Sensing the world was weighing them down, renowned sage Mark Richardson visited the twins and instructed them to leave The Block for some compulsory downtime.

The other teams were confused, and when it came to finding out Room Reveal was being pushed they were downright pissed, but of course none of that means a thing when you consider what folks like Annwynn are dealing every day.

Julia and Ali are exempt from the Power Rankings this week because I figured I might as well give them a break too. However, they definitely get an A+ for rounding up their boyfriends and heading over to Annwynn’s place during their enforced leave to finish up the odd jobs and enjoying a lovely roast with her.

This child should probably be site foreman next year. I doubt there would be any uprisings with Jasper in charge.

Wilbur did not sign a talent release form and cannot figure out how he ended up featuring in a home renovation show ffs.