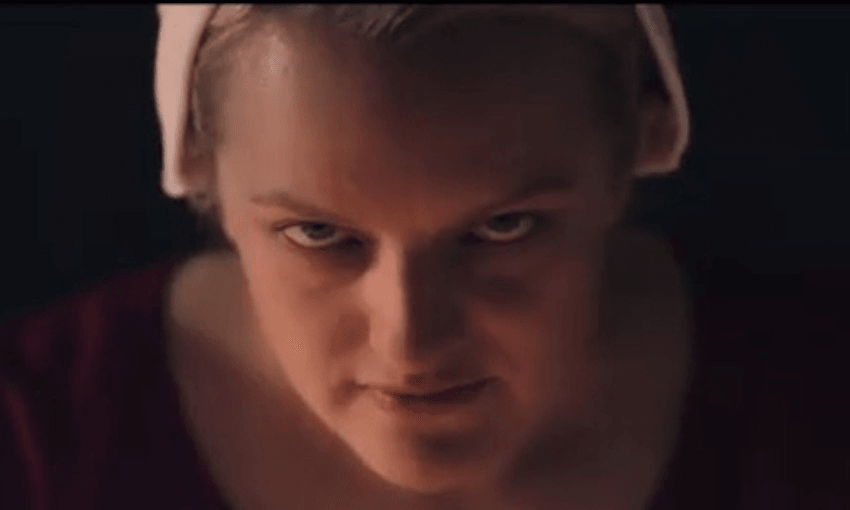 Wake up, world: Season three of The Handmaid’s Tale is coming

Blessed be the fruit, we have been sent a good teaser. A new trailer for season three of The Handmaid’s Tale landed yesterday, and Tara Ward takes a look.

The first trailer for the new season of The Handmaid’s Tale just dropped like Aunt Lydia after Emily stabbed her in the spine with a steak knife. It launched in the US as a Super Bowl Sunday commercial, because nothing says “all-American football extravaganza” better than a 26-second glimpse into a dystopian world of flames, facades and finger amputations.

The blessed teaser is over before you realise, but those precious seconds stirred the Handmaid’s Tale embers that have smouldered deep in my soul for the past year. It reveals almost nothing, yet tells us everything we need to know about season 3. It’ll be dark, it’ll be powerful, it’ll be another masterclass in how to form six straight lines and march in formation.

But we didn’t find out the most important thing: what the hell happened to Aunt Lydia?

What I do know is that the first half of this teaser was classic Handmaid’s Tale emotional manipulation. The sun rises over a field of wheat waving gently in the breeze. Our beloved June, who we last saw turning her back on freedom, sits peacefully at a window. “It’s morning again in America,” the male narrator begins, as uplifting classical music begins to play.

Plonk, plonk, plonk, go the pianos of Gilead, and I feel a warm, slightly radioactive wave of optimism wash over me. Dawn is breaking, and what a day! Is June free? Did she hear my screams at the end of last season’s finale? She must have chased down the truck, escaped to Canada, taken down the entire regime, reunited with her family, and now lives happily ever after in Hawaii. Praise be, America, blessed be the fruit.

I mean, there’s a bloke on a paddleboard, for crying out loud. If that’s not a) Nick in a wetsuit and b) a sign that this entire nightmare is over, I will eat my own bonnet.

“Today, more women will go to work than ever before in our country’s history,” the voiceover says, which seems…fine. They cut to a shot of women carrying shovels, in a place that looks suspiciously like the Colonies.  I don’t remember seeing paddleboards in the Colonies.

“This year, dozens of children will be born to happy and healthy families,” the voiceover continues. Dozens. Dozens of babies, with perfectly tiny toes, being carried by a smug line of Commanders’ Wives. Then we see Serena Joy feeding baby Nicole, bathing in the golden light of the self-righteous elite, and it’s clear this is all a terrible dream.

How very dare you, The Handmaid’s Tale.

It turns out this trailer was inspired by a 1984 Ronald Reagan election campaign ad, known as “It’s Morning Again in America”. It’s a bloody genius move, because according to this ad, 1980s America was a blessed country, filled with white heterosexual men and women who loved a good wedding and furnished their new homes with big rugs. Sound familiar?

Big rugs or no, the dream is over, because The Handmaid’s Tale reality exists in the fiery recesses of hell. Gilead is burning, and look who’s at the centre of the flame.

Is this the beginning of the end? Handmaids march through the streets of Gilead and over bridges, standing in formation at the Washington Memorial. We see a frantic Emily holding June’s baby, and a resolute June. The Commander has another tantrum. Did he vote Reagan? Does he love big rugs, too? It’s all his fault.

You can watch the first two seasons of The Handmaid’s Tale on Lightbox right here.