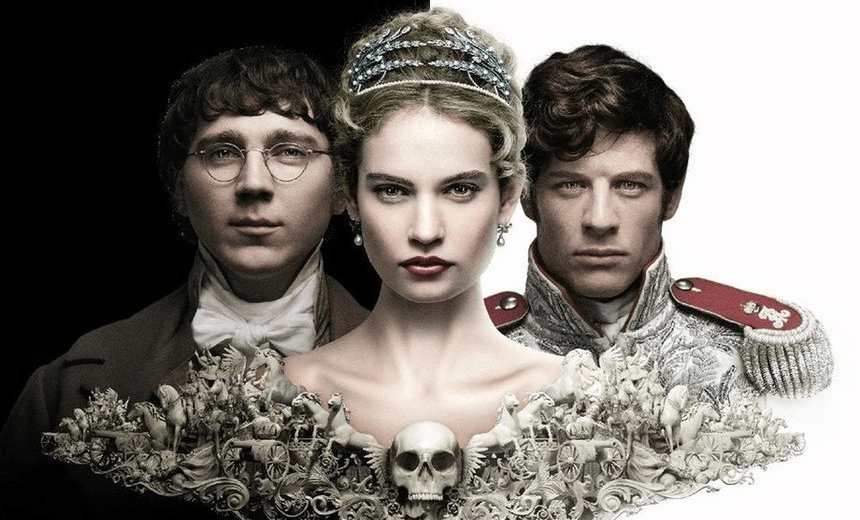 Finally: Enjoy War and Peace without all those pesky words

By Lindsey Dawson
Guest writer
Made possible by

If you haven’t read Tolstoy’s War and Peace (and who has?), Lindsey Dawson has found an easier way to experience his epic love-and-conflict story: by watching it on the telly.

The Russians are coming! We’ve heard that phrase often enough, but back in 1812 it was the Russians yelling, ‘The French are Coming!’ Napoleon wanted Moscow.

War and Peace, the sumptuous BBC six-parter now running on Lightbox, is based on Leo Tolstoy’s enormous novel about events leading up to that war.

It starts off seven years earlier. In 1805 everything in Moscow and St Petersburg is lovely – as long as you’re an aristocrat and not a serf. Lowly pot-scrubbers and pig-tenders barely get a nod in this series; it’s all about the toffs. Which is pleasing from our point of view as it allows us to nosy at their gorgeous clothes and mighty homes.

The plot revolves around the fates of a few families that were packed to the gills with princes, counts and barons. While the men bear up under the weight of their gold-braided shoulders, the ladyfolk have oodles of time in which to take tea, squeeze into lovely gowns and slide over the snow in horse-drawn sleighs.

Their main preoccupation as the series starts out is with the making of good marriages. The aim is to reinforce reputations or rescue them, and sometimes to save families from utter ruin. Cue matronly furrowed brows beneath the tiaras.

Scriptwriter Andrew Davies focuses on a core group of 19, played by a mostly star-studded cast. You’ll spend half your viewing time musing, “now where do I know that face from?” and taking to Google when it all gets too much.

At the centre of the drama, directed by Tom Harper, are the hopes and dreams of friends Natasha, Andrei and Pierre.

Her good and gentle friend Pierre is a wealthy count’s son but also (oops) illegitimate. This means that, even without his scandalous enthusiasm for revolutionary politics, he would be still not be seen as eligible. Pierre is played by Paul Dano. Hint: Little Miss Sunshine and 12 Years a Slave.

Then there’s Prince Andrei, a proud and frustrated young husband. Domesticity is much more boring than the thought of military glory and so he dumps pregnant wifey at the family’s country estate while he goes off to war.

It seems rather unprincipled behaviour for that nice vicar in Grantchester, but actor James Norton looks altogether more princely here in boots and breeches than in a dog collar.

The costume department excels all round, with the blokes in fabulous cossack capes often out-blinging the gals.

Not all observers have been impressed however, with blogger Ellie Valsin ranting that that the women’s clothes and hairdos smack of century-later Downton Abbey style.

Her episode-one outrage was aimed at a gown worn by a snooty society dame played by Gillian Anderson (Scully from The X-Files etc).  Valsin opined “it looks like a nightgown. An ill-fitting, easter-egg-colored, cheap polyester satin, one-sleeved nightgown”. With other actresses, she is often concerned about there being inappropriate gussets or not enough tit.

But I think she’s over-critical. Bring on the brocade, I say. There’s no such thing as too many fur-trimmed robes, especially as worn by Adrian Edmondson.

Fans of classic 1980s Brit humour will remember him as Vyvyan the punk in The Young Ones.  Vyvyan was a right yobbo, but War and Peace allows Edmondson to swan around as a fond and feckless dad running his family’s fortunes into the ground.

But enough about frocks. War and Peace is really about people, a big, sweeping soap opera that takes in sex, love, jealousy, ambition, grief, courage, villainy, faith, fun, rage, disappointment, death and birth. Of course that’s all stuff we continue to grapple with now, which makes it hugely watchable.

I can’t imagine how a scriptwriter turns one of the world’s longest novels into a mere few hours of drama, but Davies, 79, told the Telegraph that culling it down was “a doddle”.

He’s had some practice, mind, having also written the BBC’s critically adored House of Cards – the original series starring Francis Urquart plus Bleak House in 2005 and the 1995 version of Pride and Prejudice, which famously included Colin Firth’s dripping Mr Darcy moment.

There’s lots of sex in War and Peace, even incest. It was hinted at by Tolstoy. ‘It was all there, he just hadn’t written the scenes and I couldn’t see why, so I did,’ Davies told the Daily Mail.

Nek minnit, the tabloids were labelling the series Phwoar and Peace.

The more poignant point about War and Peace is what was unknown in Tolstoy’s day – that the pampered life of Russia’s aristos had only a hundred years to run before communism would take over. As glorious as it is for the eye to take in the prettiness of St Petersburg’s ballrooms, there’s a doomed sort of light over all that excess.

It also reminds us of the grossness of war. Its battlefield scenes show us the horror that happens when young men are expected to run headlong at each other, using only sabres to slash and shred.

Napoleon shows up every now and again, brooding on horseback under his bicorn hat. If you’re up on your history you might already know what happened when he invaded Russia in 1812.

If not, you might like to check it out and gasp at the trail of misery he left in his wake. Or you might even be tempted to read Tolstoy’s novel.

I spotted a BBC-published version the other day in Mt Eden’s Time Out bookstore. It’s only 1000 pages, because the font looks like the size they use in phone books.

Or you can just do what Davies did – cut the damn thing in half and save yourself a whole lot of time.

Far easier to just sit back and enjoy War and Peace on Lightbox by clicking below.