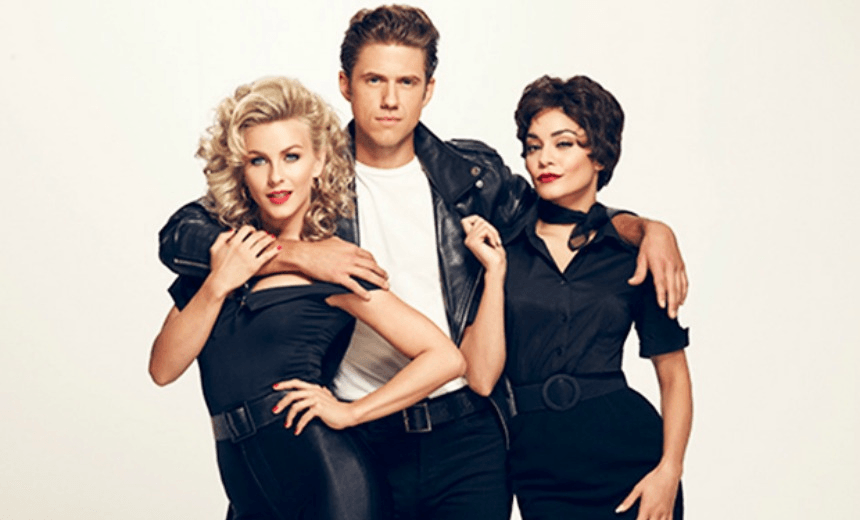 Somewhere in an NBC Conference Room circa 2013:

I can only assume this is how the first televised live musical event of our time – NBC’s The Sound of Music Live – came to being.

On paper, it’s a bank-roller. Everybody loves musicals. Everybody loves celebrities. People love celebrities in musicals, just check out how many times Ashlee Simpson has performed in Chicago. It helps that it’s pretty simple: rehearse for three weeks and film it on a soundstage you already have kicking around, circumventing both the massive cost of filming a musical or putting up a show on Broadway for two years just to recoup your costs.

Against all odds, The Sound of Music Live was a ratings success. Almost 19 million people tuned in to watch Carrie Underwood be a truly horrible caregiver, but it was slammed by critics and gay men on Twitter. People were also not used to watching a musical that sits in the weird space between film and theatre.

The Sound of Music Live looked cheap to a lot of people, which is what happens when you film a theatre set – it’s meant to be sat inside and looked at, not have every flaw mercilessly exposed. Punchlines dropped with nobody to laugh at them. The entire thing felt weightless and bizarre. The performances that were pitched to the back row fell flat with a camera shoved right in their face.

NBC followed it up a year later with the even more maligned Peter Pan, with a horribly overmatched Allison Williams and a comatose Christopher Walken, then evened it out with a delightful but still troubled version of The Wiz last year.

Early last year FOX announced they would be doing their own live television musicals, and their first one would be Grease.

Grease is like Shortland Street, everyone has an opinion on it. I have to fully disclose that I do not love Grease. I worked on it on high school as a truly awful followspot and if I ever hear ‘Grease is the Word’ again I will lose my poor mortal mind.

Even more than The Sound of Music, Grease is a musical that is accessible to everybody. The songs, styles and tropes of Grease have seeped into the pop culture, and it could even be argued that Grease is where the trope of 30 year-old adults playing teenagers originated. At some point we’ve all had to sit through high school and amateur casts screwing up ‘We Go Together’.

Grease also sets up the most basic plot it possibly can – a good girl and a bad guy had a summer romance and, lo and behold, now they’re at the same school – then ladles it with as many songs as it can. At any moment where the plot can stop for a song, it does. If a character can sing, they do.

You don’t need to be emotionally invested to enjoy a song like ‘Greased Lightning’, you just get to watch guys in tight leather pants jumping on cars. You don’t need to worry about a cast pitching their jokes the right way or being emotionally honest if they can hit their marks and remember where their hands are supposed to be jiving.

In this way, Grease Live is already getting off on the right foot. It’s not an easy musical, but your challenges are less in concept, staging and emotional truth than they are in choreography, energy and wigs.

Grease Live also benefits from the mistakes made by NBC’s past live musicals. There’s a live audience to clap and occasionally laugh, which helps. We’re hard-wired to clap when someone sings their heart out. We’re hard-wired to laugh when we hear a punchline. When we don’t get that feedback, and the actors don’t get that feedback, it creates a dissonance. So when the audience bursts into applause after ‘Summer Nights’, it puts us at ease.

Grease Live also realizes that when you’re filming something, you have a camera! And you don’t have to leave that camera on a tripod, point it at the actors, and then go home. You can move it around, you can use it to provide energy, you don’t have to be scared of it. Take this:

This is hardly Moulin Rouge, but it’s a start.

Julianne Hough (of blackface, Burlesque, Rock of Ages and So You Think You Can Dance fame, in that order) and Aaron Tveit (of various Broadway things you’ve never heard of) make for a decent pairing. The fact that they can both really dance is a huge asset.

Keke Palmer (from Scream Queens if you’re trash, from Akelah and the Bee if you like spelling bee films) is auditioning for a Lifetime Whitney Houston movie with her full-on Christmas hamming:

Carly Rae Jepsen is beautifully earnest, as if you’d expect anything else from the woman who brought us 2015’s best album EMOTION, as Frenchy and they even wrote her a solid C+ ballad that I promptly bought on iTunes:

Apparently they put in a new song so they could be eligible for the Emmys, but if it means in a roundabout way that more people buy EMOTION, I am all for it.

The highlight of every production of this show should always be the actress who plays Rizzo, and Vanessa Hudgens does not disappoint. Hudgens performed the night after her father died. It’s amazing that she was able to perform at all, let alone with the amount of sass, hurt and righteous self-confidence that Rizzo needs. Plus, she absolutely nailed the best song of the show:

Grease Live isn’t perfect. There were the inevitable sound problems, including a moment where my girl CRJ appeared to mumble a lyric she may have just forgotten. As self-appointed Lip-Sync Cop, there is no way that ‘We Go Together’ wasn’t lip-synced to a prerecorded track.

There were moments where they tried to go for star quality rather than stay true to the show. Musical irritant Jessie J – who represents neither ‘star’ nor ‘quality’ – introduced the show on a sour note by singing ‘Grease is the Word’, while Boys II Men completely missed the bitchy shady barely-sub-actually-just-text parts of ‘Beauty School Dropout’.

Finally, there is no way to convince me that every one of those T-Bird guys isn’t a full Kinsey 6.

Still, for the first time, a live musical television event managed to actually feel like an event. Not a curio for cynical live tweets (hi!) or musical fans who will watch anything where someone starts singing for minimal reason, but a high energy, genuinely delightful romp. Grease Live doesn’t deserve a standing ovation, but it’s certainly worthy of a chang-chang-changitty-chang-shoobop.