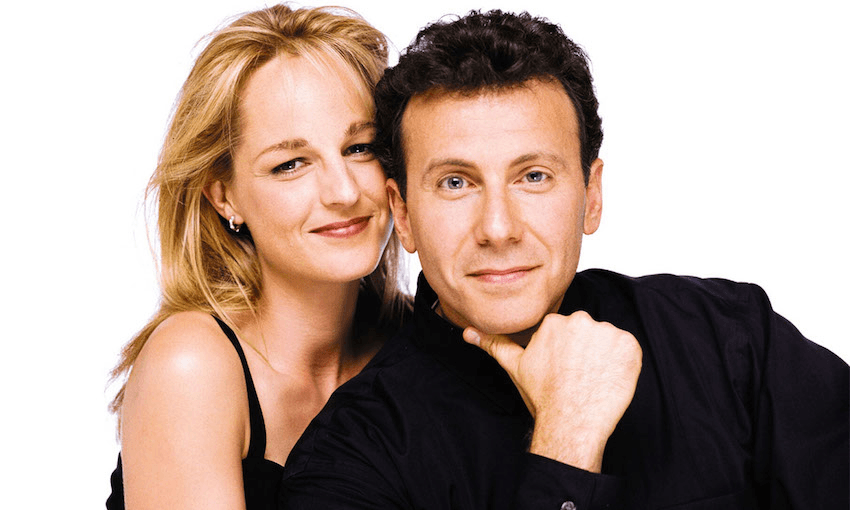 Helen Hunt and Paul Reiser in the 90s classic, Mad About You.

Bringing back the Buchmans: Celebrating the mad ’90s moments in Mad About You

Helen Hunt and Paul Reiser in the 90s classic, Mad About You.

Nearly 30 years after its first episode, award-winning sitcom Mad About You is back. Tara Ward travels back in time to celebrate the show’s most ’90s moments.

Mad About You is back on our screens, and it seems the only thing that’s changed since 1999 is the colour of the Buchmans’ kitchen cabinets. The series ran for seven seasons between 1992-1999, and focused on the minutiae of the daily lives of New York newlyweds Jamie (Helen Hunt) and Paul (Paul Reiser) Buchman. It’s been over 20 years since we said goodbye to Jamie and Paul, yet the show’s 2020 return feels seamless, because Mad About You proves that people will drive you absolutely crazy, no matter what century you live in.

Back in the ‘90s, Jamie and Paul bickered and bantered their way into marriage, and in 2020 they’re about to bicker and banter their way through life as empty-nesters. The first episode of the revival sees them waving daughter Mabel off to college, and now the Buchmans face a new stage in their marriage. They’re dealing with a fresh world of issues from being separated from their daughter, to the challenges of Jamie’s menopause, to whether Paul feels comfortable being naked around his best friend. You know, classic 2020 angst.

Paul and Jamie’s return will best please original fans, who’ll remember watching the original seasons on their box TVs and are nostalgic for a time when the only phone they had was drilled to the wall. The world has changed since 1992, but the Buchmans have not, and there’s something gentle and reassuring about that. They’re still mad about each other, they’re still mad about the little things. I’m mad about Murray the dog. Where is he? I miss him.

They say change is as good as a holiday, so before you dive into the show’s new season, let’s chuck on a baggy flannel shirt and some high waisted jeans and celebrate some of Mad About You’s best ‘90s moments.

In the ‘90s, going ‘viral’ meant you had to turn up at a stranger’s house, pretend to be from the FBI, and swap a VHS copy of Robocop 2 with your own home movie. Better living, everyone.

The Buchmans use the internet (season 7, episode 8)

It was 1998 and a kooky invention called “the internet” was popping up everywhere. When Paul and Jamie buy a cream computer that arrives in two fridge-sized boxes, the world is suddenly Paul’s oyster. “I am using the internet, and it is fantastic!” he tells Jamie. “I was in a Party of Five chat room and then I played backgammon with a family from Iceland!” Looks like the internet peaked in ’98, folks.

What a time to be alive.

Jamie and Paul get trapped in their bathroom (season 1, episode 16)

Apparently we all take our phone to the loo in 2020, but in 1992 we couldn’t fathom living in such a blessed age. Back then, phones were only for using once you’d scoured the Yellow Pages, or you wanted to Dial a Prayer, or you needed to vote 17 times for Color Me Badd’s ‘All For Love’ on the radio Top 9 at 9 and then lie about the toll calls when your father got the phone bill.

So when Jamie and Paul pull the handle off their closed bathroom door, they’re stuck. They are trapped for hours inside a dunny of doom, with no phone hiding in their back pocket to call for help or to distract them with wacky videos of dogs dressed as superheroes. Bless you, progress.

We were thirsty for anything Titanic-related in the late ‘90s, which is why Paul found himself making a documentary about the making of a documentary about the award-winning movie. This episode also guest stars Ellen DeGeneres as a caterer who ends up working as Jamie and Paul’s nanny, an idea as doomed as sending a ship straight into an iceberg.

Paul talks on a kitchen phone with a stretchy cord (season 1, episode 5)

Not only do the Buchmans have a landline (RIP), but they’ve got a wall-mounted phone with a ginormous curly cord, which was the hallmark of every decent American sitcom during the late 20th century. You can call me crazy, you can call me Al, just call me.

Paul shares a cigar with Kramer from Seinfeld (season 1, episode 8)

Nothing says ‘early ‘90s’ better than two white men smoking a Cuban cigar outside Jerry Seinfeld’s front door. Kramer’s Mad About You cameo was the sitcom crossover that blew our tiny 1992 minds, until the whole Ursula/Phoebe Buffay stroke of genius with Friends in 1994. In the words of Kramer himself, giddy up.

Paul has a dream that could solve the Millennium Bug problem (season 7, episode 16)

Jamie reckoned the Millennium Bug was “a bunch of hooey”, but in 1999 the rest of us gave the terrifying threat of “no more fax machines” the respect it deserved. Luckily for us, Paul had a weird dream about a mathematical code that would save the planet, and it’s thanks to his subconscious that we all survived the turn of the century.

Finally, I’d like to predict that fax machines will one day become cool again. High pitched screeching never goes out of style.

All eight seasons of Mad About You, including the revival, are streaming now on TVNZ OnDemand.