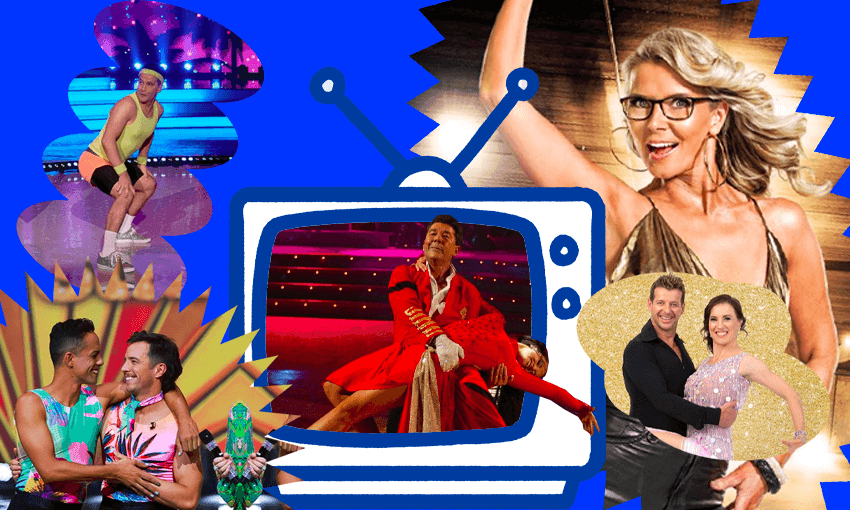 Monday night’s shock elimination was far from the first time DWTS NZ has hit us for six. Tara Ward drags herself across the historical dancefloor to uncover the show’s most shocking moments… ever.

Eli Mathewson’s elimination from Dancing with the Stars NZ wasn’t just a shock. It was also a crime against dance and a fraud of the heart, but I fear the police didn’t take my complaint seriously when I called. I can only assume investigations are ongoing.

While we wait for justice to be served, let’s relive some of DWTS NZ’s other shocking moments through the years. There have been plenty, and I’m not talking about Marama Fox performing with poi during the Viennese Waltz, or Suzanne Paul winning the 2007 final with a broken rib, or Mike McRoberts’ sultry rumba in 2019. Those were all impressive and memorable moments, for sure, but were you shocked? No. You were not.

In this hectic world of lycra and sequins, it seems there’s nowt more shocking than a disappearing ponytail and a dislocated knee. Read on… if you dare.

The most shocking thing about Paul Holmes’ paso doble to ‘Thriller’ is that it’s one of the most compelling dances in DWTS history. It shouldn’t be. Paul Holmes clomps around the dancefloor, out of time and out of place, and yet it’s impossible to look away. No wonder Rangi from Shortland Street clapped so hard at the end.

In February 2020, NZ Herald reported Destiny Church leader Hannah Tamaki was to join the next season of DWTS NZ. A public backlash followed, with viewers expressing outrage at Mediaworks’ support of the controversial figure, and two days later Mediaworks apologised and dropped Tamaki from the line-up. Then a global pandemic struck. Coincidence? Let’s bloody hope so.

The Rock host Roger Farrelly well and truly wound up his wife with this run, trip and fall routine during his quickstep in 2018. The whole thing was executed so gracefully that it almost seemed like a planned move, a surprising symphony of motion that was part dance, part magic, all magnificence. “Why do a mic drop if you can do a body drop!” judge Camilla Sacre-Dallerup said, which is exactly the type of classic banter they teach in dance school.

Goodbye my lover, goodbye my hair. RIP to head judge Camilla’s fake ponytail, which shocked scalps everywhere when it went rogue and silently slithered down her back and onto the floor. An emotional performance. It’s a 10 from me.

Nobody was more shocked than eventual 2015 DWTS NZ winner Simon Barnett when the power of Coldplay’s ‘Vida la Vida’ compelled his knee to pop right out of its socket. Barnett was mid-lunge, mid-tango, mid-everything when his knee dislocated during his second dance of the season, but when that knee magically popped itself back in, Barnett simply kept dancing. He was the Buck Shelford of the dancefloor, his patella the burst testicle of the tango. Viva la vida, viva la kneecap.

“Come on. What the fuck. Send him home,” Sam Brooks succinctly recapped when Act leader David Seymour avoided his eighth elimination despite being really shit at dancing. Seymour stumbled his way to week nine thanks to the support of thousands of 14 year olds, earning more votes on DWTS NZ than in the previous general election.

DWTS NZ hit the headlines when competitor and Bachelor NZ star Chrystal Chenery refused to accept radio host Dom Harvey’s apology for sharing an unsavoury screengrab taken during a dance. The fallout is best captured in Alex Casey’s piece, which tracks how the incident became “a deeply troubling representation of the hatred towards women who stand up for themselves, and wish to protect and defend their rights to their own bodies”. Chenery was runner-up in 2015, second to Simon Barnett and his magical kneecap.

Suzy Cato, hot potato. DWTS NZ’s spectacular promo gave us the children’s TV presenter as we’ve never seen her before: a vision in gold, attitude pulsing from every pore. Cato could dance, she was famous and everyone adored her, which is the holy trinity of DWTS success. Based on that promo, there was no way Cato could lose. No way in hell, New Zealand.

Sadly, the public are fickle fools. Suzy Cato was eliminated before David Seymour, and four years later it still stings. We let ourselves down. We let Suzy Cato down. The sooner DWTS NZ does a comeback season, the better.

Act MP Rodney Hide transformed into Raw Hide for this 2006 cowboy-themed cha-cha, but nothing chafed more than the moment he dropped his dance partner Krystal during a lift. There’s plenty to be shocked by here – the heckles from the audience, Jason Gunn’s long shirt cuffs, the way Raw Hide’s sequins seem to spell out “help me” in a certain light – but the most disturbing move comes during the cha-cha climax, or the cha-max, as they say in the dance world.

Krystal holds the performance together until the final seconds, when the glory rests with Hide. He has one job. He lifts, he falters, he drops. It’s a tragedy in three parts. The score? Ones across the board.

Look up “shocked” in the dictionary and you’ll see a photo of New Zealand last Monday night at 8.30pm, when the public vote eliminated Eli Mathewson. Yes, we’re only two episodes in, but given we lost Sonia Gray the week before, it’s a travesty that two of this season’s most charismatic competitors have disappeared off the stage quicker than Camilla’s ponytail.

Bring back the dance-off! Bring back Suzy Cato! Watching the first all-male couple dance their way to glory could have been a joyful tonic to get us through winter, but no. Eli and Sonia are gone, and now all we have left are Vaz’s abs. How very dare you, New Zealand.

Dancing with the Stars NZ screens on Three on Sunday and Monday nights, and on ThreeNow.