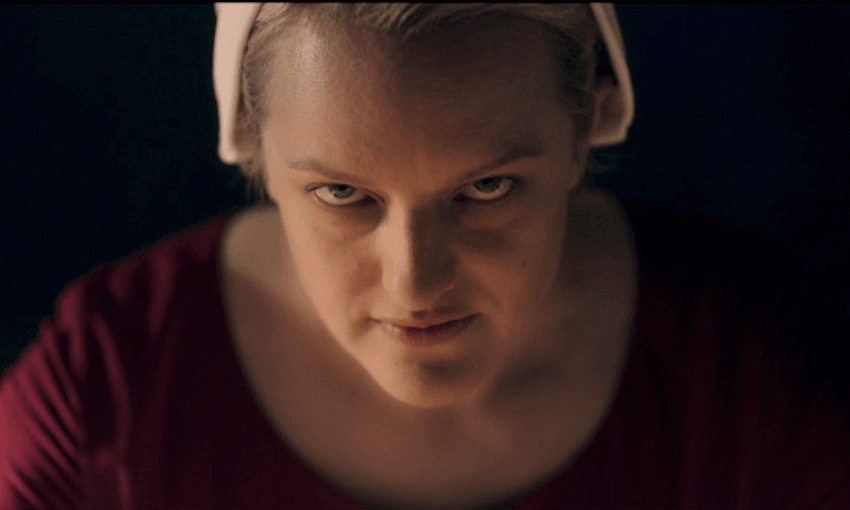 Blessed be the fight: The Handmaid’s Tale returns tonight

With three episodes of The Handmaid’s Tale arriving express to Lightbox tonight, Alex Casey prepares you to return to life in Gilead.

Starch your bonnets, straighten your Scrabble tiles and plot to overthrow the oppressive patriarchal system because The Handmaid’s Tale returns to Lightbox tonight with three whopper episodes for you to devour like your first bowl of Froot Loops in years. If you’ve forgotten where things are at with June and her good friends in Gilead or have lost track of what’s happened in the show and what’s happening in real life, then please allow me to refresh your memory and steel you for the premiere with these scorching hot tips.

First of all, watch the trailer:

I know that smoking is terrible, but June and Serena puffing on a dystopian dart by the indoor pool is a tremendous mood.

Then scour the internet for clues

First of all, this medical man Dr Nat has done some truly surgical analysis on the trailers, teasers and imagery relating the season three, including the bombshell revelation that the show about a woman named JUNE is being released IN JUNE.

“If I’m going to change things, I’m going to need allies,” June mutters in the trailer. “Allies with power.” It seems this season is going to be viva la revolution, all ladies getting in formation and exchanging frenzied glances across supermarket aisles. “You have to fight fire with fire,” Elisabeth Moss told Entertainment Weekly. “To fight against the people she has to fight, June has to become more like them.”

Speaking in another interview with GQ, Moss talked about her role as executive producer on the season and hinted that what’s to come is unlike anything we’ve yet to see on the show. “I think we need to go places that we haven’t gone before. We need to break the show open and break it open really wide.” Based on Moss’ twerking on Ellen, I hope they don’t throw the net open too wide.

If you’ve got time, why not anchor yourself where it all began: 34 years ago in Margaret Atwood’s apartment in West Berlin. If you don’t have time for that, then just read this stunning piece written by the author herself. “Some books haunt the reader. Others haunt the writer. The Handmaid’s Tale has done both.” And when you’re done with that, Sophie Smith wrote a great piece for the Spinoff about how reading the book changed her life.

Or just read the news

It’s become hack to compare the events of The Handmaid’s Tale to real life, which is a terrifying thing in itself. But to really add another dimension to the show, why not spend some time reading up on the reality of the abortion bans rolling out across the US, and both the jaw-dropping and everyday stories of the women who exercised their right to choose. Men: read this.

Then laugh (or cry) at this

Today I thought I saw a woman dressed as a handmaid about to jump from a building. I called 911. pic.twitter.com/EIrz6wR0bz

And then top it all off, watch this recap video

If you’re too short on time for any of the above, get all caught up with this two-seasons-in-two-minutes recap video narrated by me, the unofficial voice of Gilead.

A bleak show in a bleak world can certainly take its toll, so make sure you tee up a couple of soothing Youtube clips to enjoy when the dread sets in. Here are some I prepared earlier.