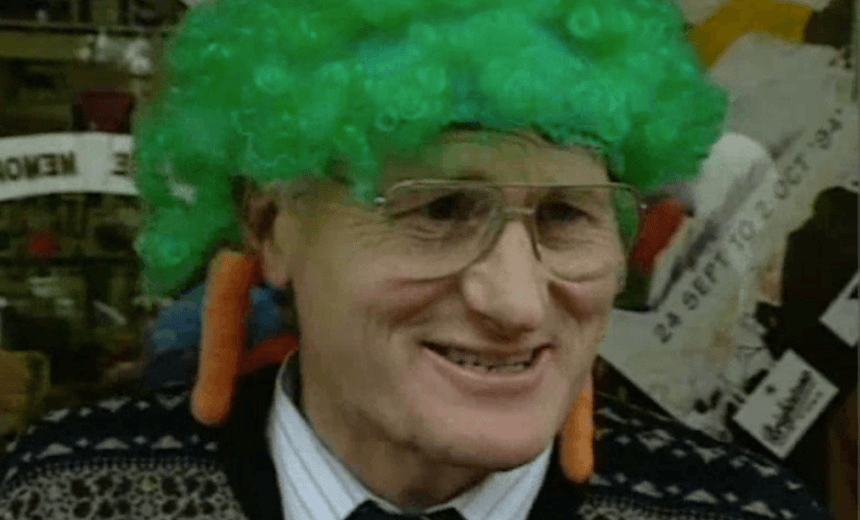 Earlier this year Alex Casey watched Putting Our Town on the Map, a 1995 documentary on NZ On Screen that unearthed the bizarre origins and rituals around Paeroa’s L&P bottle and Ohakune’s giant carrot.

Our host Miranda Harcourt is taking us around New Zealand, looking at what different small towns have done to put themselves on the map. Invariably, it seems, there is only one option – build a giant version of a vaguely relevant edible item and plonk it right in the centre of town. A montage shows us just how deep this bizarre Honey I Blew Up the Fruit impulse goes in Godzone. “It’s amazing the ideas they come up with” she narrates, as the camera does the world’s slowest zoom into the mouth of the Gore trout.

Basically, Miranda wants to see all of the big fruit. She wants it to gather it all up onto a platter and lift it onto her head like another Miranda of days gone by. Surely it will crush her small body, but she’ll die in timeless, festive style. Our first stop in Miranda’s wild big stuff tour is Paeroa, where Promotions Officer Gail Munro tells us about the big L&P bottle’s origins. Turns out it began life as a promotional rocket in the centre of town. If history repeats, I look forward to the day when the Rocket Park rocket is turned into an enormous can of Mother.

Basil, the Mayor of Paeroa, is well stoked with the bottle. He has some advice for Miranda, for when she builds her own large-scale novelty statue. “You’ve got to be first, Miranda. You’ve got to sustain your promotion, sustain the confidence in your town”. Not all of the locals are as impressed with the town’s L&P branding, bottling up their feelings until the camera is rolling. Take this quintessential angry-man-on-a-hill John Howard, for example.

John’s solution to the town’s bottle-based arrested development is absolutely crazy, and also the best idea I’ve heard in a while. “It’s quite easy” he spits, “just make the bottle into an information centre”. On that hill, John reveals his grandiose scheme. The first is to expand the L&P bottle to be over 60ft high and jack in an information centre AND a museum, connected with a spiral staircase. But what else, John?! For the love of god WHAT ELSE?! The lid will be a viewing platform, obviously, to give you a view of this man’s tractor shop across the road that money can’t buy.

We also meet this little crapper of a kid, betraying his town in a vox pop with his borderline terrorist anti-L&P propaganda:

Enough of Paeroa, onto Ohakune. A carrot PR man tells us that the big carrot was gifted to them from an old ANZ commercial, after he rang them up and outright asked them for it. Those were the bloody days, eh. I’ve been trying to get ANZ to give me a mind-reading session with The Mentalist for months now, if only this was 1995. We’ve arrived at the most wonderful time of the year – the Annual Ohakune Carrot Festival.

Can I be honest here? The decor looks like something the Blair Witch would have nightmares about.

Once a year in Ohakune, it’s absolute carrot mania. You can’t move for carrots. “Nobody in Ohakune needs glasses with all this carrot juice everywhere,” says a man wearing glasses. It’s mayhem. A chopper lands in a field. Who’s inside? Oh, just a horrific human-sized carrot wearing a green balaclava. That’s fine.

Miranda concludes, “in Ohakune, it’s this monumental erection that gets them in – but the mountain that makes them stay”. And off she goes, onwards to celebrate monumental erections up and down our fair nation. Twenty years on, I hope she found what she was looking for, and I hope that John on the hill is still pushing for his Paeroa visitor centre dreams.