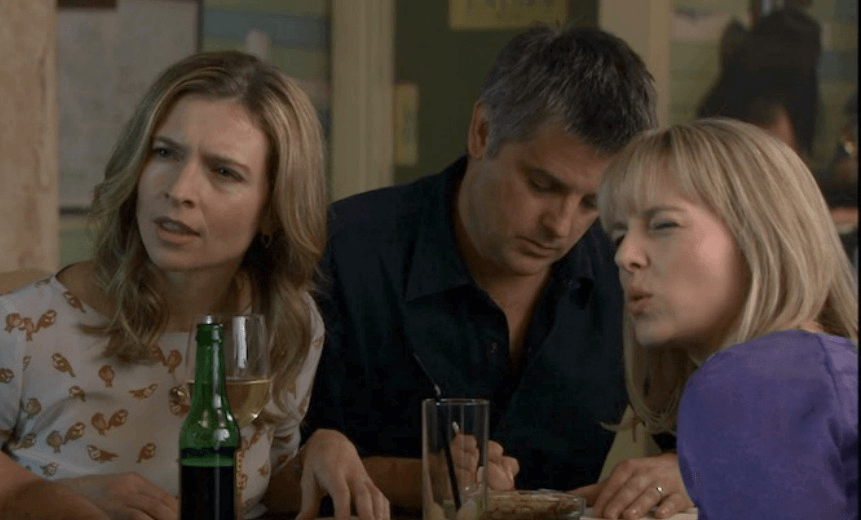 The 10 stages of pub quiz grief according to Nothing Trivial

Everything Tara Ward knows, she has learned from Shane Cortese and the Nothing Trivial gang. Here she outlines the 10 stages of pub quiz grief.

Watching three seasons of Nothing Trivial broadened my general knowledge more than the time I fell into a Buzzfeed Quiz vortex of time and space and spent seven hours discovering what my mutant power is. Thanks, Nothing Trivial, that’s a feat more impressive than running away from my problems at the speed of light.

I now know that Henry VIII beheaded two of his wives and that Sir Edmund Hillary’s middle name was Percival. I also know that quiz nights are a bloody serious business. They begin innocently enough. Your team is bursting at its brainy seams with optimism and confidence, ready to annihilate the opposition with a fathomless pit of obscure facts. Nobody knows the minutiae of Kylie Minogue hits like you do; someone better call John Hawkesby and tell him ‘it’s in the bag’.

Alas, the quiz progresses and terror sets in. Tempers begin to fray. You know nothing, your teammates are idiots. Suddenly you’re more competitive than a seahorse mating for life, and it’s now a fight to the death.

Before you realise, a decade will pass and you’ll find yourself writing about that pub quiz in 2007 when you were robbed of victory. You knew the centre circle of a netball court was three feet wide, but did anyone listen? They did not. You’re now as a shadow of your former self, haunted in defeat, and still clueless about which New Zealand town features a statue of a giant kiwifruit.

The Nothing Trivial characters love a pub quiz more than they love hooking up with their exes or getting random strangers pregnant. Each week, their trivia tragedy or triumph follows a clearly delineated phase of emotional development, moving from states of wild enthusiasm to quiet desperation to jubilant success.  It’s a perilous journey across the salty sea of knowledge, but if I can ease you through these well-recognised stages before I use my shape-shifting mutant powers to morph into a free bowl of cheesy wedges, then my work here is done.

Pens at the ready? Gather up ye tiny brains and prepare to go down in a ball of trivia flames.

The ‘I can’t believe how easy this is’ stage

Chuck up a flag, dig in your crampons and change your middle name to Percival, because you just reached peak pub quiz. Of course you can name the members of Enid Blyton’s Secret Seven! (Susan, Pam, Scamper the dog, the girl who stayed behind to tidy the cave while the boys solved crimes…plus Dipsy, Lala and Po?)

What’s the world’s largest rodent? The stuff of nightmares, that’s what.

The ‘let’s hide in a stupid shaped hole’ stage

That face when you can’t even get the 50/50 answers right.

The ‘I am ADAMANT I know the answer’ stage

I will prove it was Zac from The Bachelor who said ‘there is only one happiness in life: to love and be loved’, but first I need to drink three more glasses of this delicious house wine, thank you goodnight I love you all.

The ‘well, this is embarrassing’ stage

Perhaps calling yourselves ‘The Greatest Quiz Team In The World And The Rest Are Bonehead Losers’ wasn’t the best idea.

The ‘nobody could possibly know that’ stage

Q: what breed was the oldest documented dog, and how old was it when it died?

A: tbh I just came for the free cheesy wedges.

RIP, Bluey the Australian Cattle Dog, aged 29 years 5 months. Your legacy lives on in quiz nights around the world.

I’m adamant that a tomato is a fruit. ADAMANT, I TELL YOU.

The ‘there’s no way that even exists’ stage

Who knew XE is the 54th element on the periodic table? Pretty sure the 55th element is WTF and FFS is the 56th and anyway aren’t Xenon the people you call when the photocopier jams?

Or as Nothing Trivial’s Brian said, “suck on that, quiz wankers”.

Click below to remember the highs, lows, and joker rounds of Nothing Trivial on Lightbox