At just 23, director Ruby Griffin is the oldest member of Lil Kings. But don’t mistake this team’s ages for inexperience – they’ve been making films together since 2013. These guys are the Silverchair of 48Hours, and Long Haul is their Neon Ballroom – a reference none of them will get because that album came out before any of them were born.

Griffin calculates she spent around 40.5 of the available 48 hours working on this year’s film, and a lot of those hours were spent crowded in the back of a van full of cast and crew. That van is the film’s sole location, standing in for a spaceship which is drifting hopelessly through space after running out of fuel. In the tradition of other lonely astronaut movies like Gravity or The Martian, Long Haul packs a surprisingly poignant punch in its five minutes.

This film is about…

United Nations Postal Service courier Logan is left stranded in the vast expanse of space when he runs out of fuel on a delivery. Far away from any and all signs of other life, a mysterious radio signal enters Logan’s orbit, providing him with two things he has been desperately missing: something to do, and a friend.

The biggest challenge we faced this year…

We made the decision early on to limit the amount of locations we would use (a lesson learnt four competitions ago), and eventually settled on just using the spaceship to really focus on our main character. But how do we make the film look interesting for five minutes? The van is small so there isn’t really anywhere to go – there aren’t any other rooms to visit, the set is literally made of duct tape and random pieces of junk and there are only so many times you can reinvent the wheel in terms of shots when the space you’re working in is 1.5 metres wide and 3 metres long. Figuring out ways to work around this was definitely a challenge – hopefully we pulled it off in the end! 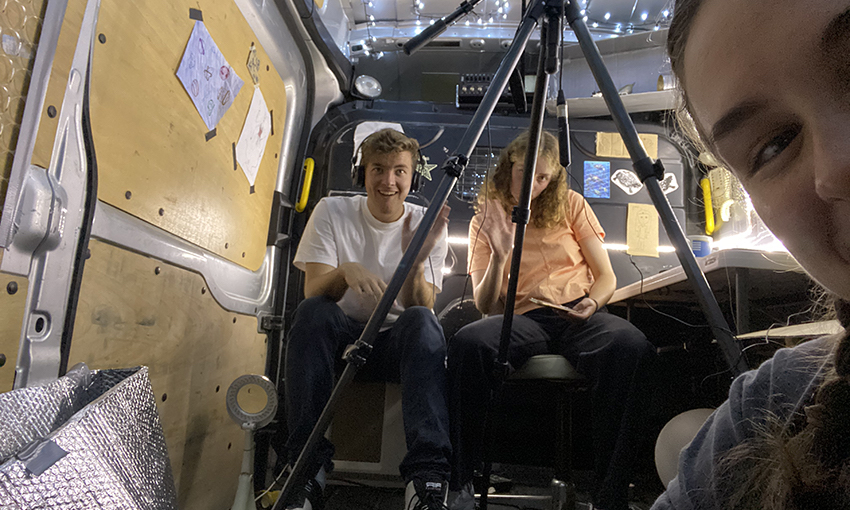 The highlight of the weekend…

Truthfully, most of this year’s competition was kind of the best. The majority of the team has known each other since primary school, and we started entering 48Hours at the beginning of high school. We’re older now. We know our strengths and weaknesses better – 48Hours really is one of the best training grounds for filmmaking in this respect. Watching the team pull together to write a wicked, heartbreaking script, build a spaceship set in a matter of hours and deliver a film that we are proud of, flaws and all? That’s the highest point. The whole thing.

Knowing exactly what resources you have available to you makes everything so much easier! Holding a production meeting a week or so before the competition to make a list of all locations, gear, actors, and additional personnel you are pretty sure you can get a hold of means there is a lot less scrambling on the shoot weekend to get things together. A local park? A keen drama major? Your friend’s dad’s boat? Jot it all down because you might be able to use it!

The VF48Hours 2021 Grand Final is on May 22 in Auckland. For more information visit 48hours.co.nz