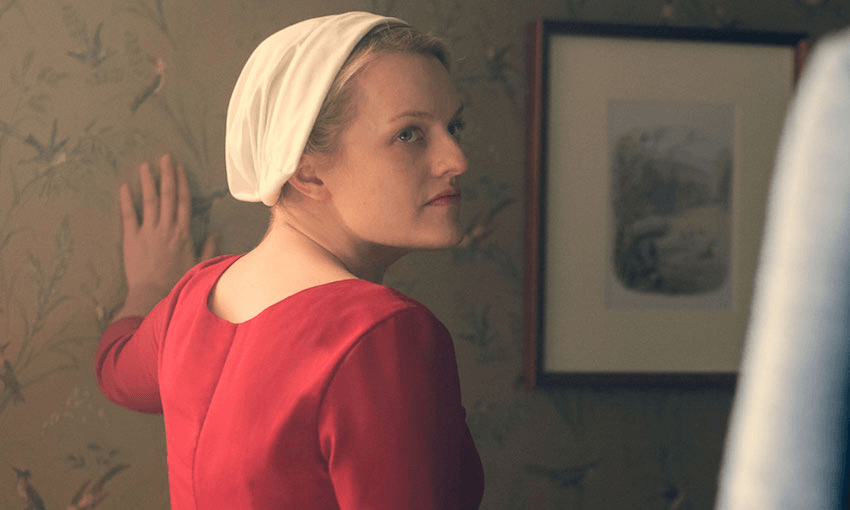 Elisabeth Moss in season three of The Handmaid’s Tale, returning to lightbox tonight.

Elisabeth Moss in season three of The Handmaid’s Tale, returning to lightbox tonight.

In the words of wise old owl Aunt Lydia, good things come to those who wait. Tara Ward recaps the first three episodes of The Handmaid’s Tale season three.

Just as tinned tomatoes arrived in the supermarkets of Gilead, our own personal apocalypse was today blessed with three episodes of a brand new season of The Handmaid’s Tale. Three episodes at once! That’s triple the tension and triple the drama, raining down upon us like a radioactive shower from the colonies that leaves us both refreshed and disturbed.

It’s been nearly a year since we last left June standing alone under a bridge, having turned down freedom to save her eldest daughter. What will June do now that she’s pissed off everyone she knows in Gilead? Will Emily and Nicole make it safely to Canada? Is Aunt Lydia made of stainless steel, and will the Waterfords ever play Scrabble again?

These burning questions have corroded my stomach lining for long enough, so let’s dive back into this beautiful nightmare to discover the answers.

June packed so much into this opening hour of season three that may the Lord open a soothing face mask and a Lush bath bomb for her ASAP. Some days it takes me an hour to put my pants on, but in the same time June managed to break into the McKenzies, spend time with a sleeping Hannah, get captured, reunite with the Waterfords and then watch their house burn to the ground.

What a day! What a time to be alive! June also washed some floors, a task I haven’t achieved since 2008, so I take my bonnet off to her.

This premiere episode was a typical Handmaid’s Tale rollercoaster of emotion. One minute June was preparing to snatch Hannah and hoon it over the Canadian border, the next she’s having a bizarre conversation about Golden Doodles and allergies. “You know this ends with you dying on the ground in front of her,” Mrs McKenzie tells June. Mrs McKenzie’s a right barrel of laughs, golden doodle or no.

June’s not the only one having a shitter of a time. Serena’s lost both a baby and a finger, and nobody’s stoked to see June back.  But the Waterfords have bigger problems, because a furious Serena set the house on fire which means the Commander will have to order a new Scrabble board and honestly, we’re never going to hear the end of it.

As the Waterford’s house lies in ashes, June is sent to the Red Centre to be punished. She learns Emily and Nichole made it to Canada, and discovers her new posting is the home of DUN DUN DUN old mate Commander Lawrence. “You’re not going to be any trouble, are you?” Lawrence asks June.

If you haven’t watched episode two, go and watch it on Lightbox right here before continuing on!

Blessed be the tinned tomatoes, because Aunt Lydia has risen from the dead. She’s the Chumbawumba of Gilead, because she gets knocked down and she gets up again, and never suggest otherwise or she’ll cattleprod that shit right out of you. Aunt Lydia’s here for a long time, not a good time, much like those tinned tomatoes.

Aunt Lydia’s right to be suspicious about Commander Lawrence, whose home is a hotbed of underground resistance. June’s stoked, and volunteers to dress as a Martha to help move a bomb-maker closer to the war front. Things take a dangerous turn when an injured Martha turns up just as the Lawrence house is being searched, and when she dies, a furious Lawrence makes June dig the grave.

It’s hard to know what to think about Commander Lawrence. On one hand, he helped Emily escape and took June to the McKenzies. On the other, he’s a bit of a shit. I mean, he was nice enough to President Bartlett in TheWest Wing, he can’t be all that bad, right? Right?!

Over the border, Luke struggles to look after baby Nichole. Emily’s reluctant to contact her wife, partly because her doctor told her to watch her cholesterol but mostly because she’s worried she won’t get her happy ending. Look, I know this is The Handmaid’s Tale, but please for the love of all things red and capey can we have one happy ending? We need great big snotty tears of artery thinning happiness, please and thank you.

Finally, may we tip our bonnets to Mrs Lawrence, whose ‘madwoman in the attic’ routine seems to be a cunning rouse. She’s actually got her finger firmly on the dystopian pulse, so let’s salute both her and her green thumbs.

If you haven’t watched episode three, go and watch it on Lightbox right here before continuing on!

Also known as “The One Where June Gets A Lot of Visitors”, this episode marked the turning point for June and Serena. The gender battle lines were drawn, as June entertained the company of Commander Waterford, Nick and Serena Joy, plus a truckload of man-children with shriveled up raisins where their souls used to be.

It was a right old sausage fest as Gilead’s commanders gathered at Lawrence’s to decide how to best continue their obliteration of women from the human race. Some reckoned a “salvaging” would be a cracker idea, while Lawrence preferred to publicly humiliate June to prove women were “useful”. Waterford warns June that Lawrence “doesn’t like to be bored”. Ugh. Waterford is definitely a shit.

But he’s a shit with power, and when June calls him on it, Lawrence takes her to a giant cage where hundreds of women wait to be sent to the Colonies. June refuses to choose which of the women should become Marthas rather than being sent to die, and Waterford gets the upper hand by proving that having autonomy isn’t as cool as June thinks it is.

In other news, Nick announces he’s being sent to the front, and a miserable Serena Joy visits June to grieve the loss of Nichole. June realises they’ll need allies with power to break Gilead down. “We cannot count on them,” June tells Serena, referring to the Commanders. “They hate us”. June takes up Lawrence’s offer and selects five new Marthas for the resistance: a lawyer, a journalist, an engineer, an IT Tech and a thief.

Serena and June make their choice. “We’ll be coming for you,” June says. “Just wait”. Blessed be the fight.

You can watch The Handmaid’s Tale on Lightbox right here, and find all of our coverage of the show here.