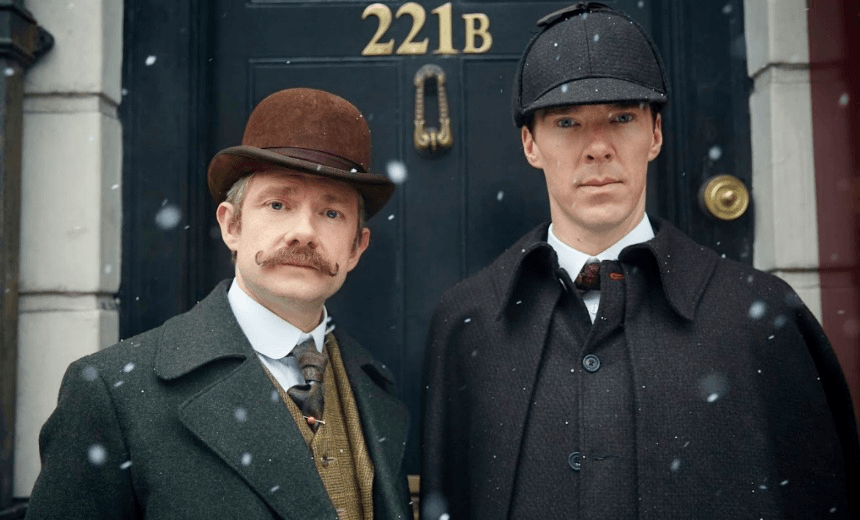 Is there nothing that an episode of Sherlock can’t fix?

Sherlock fan Jean Sergeant reflects on the place of Holmes and Watson in her own life, through grieving and pad thai nights.

I remember when the Christmas special of Sherlock, ‘The Abominable Bride’, came out at the beginning of 2016. I nagged my best dead friend Michael to watch it.

I’m not sure if he did, because he’s dead now.

We were all there, we all said it a million times – 2016 was the worst year in the history of the world, of all time, in all universes, the end. After Alan Rickman died, I said to someone “well, I guess if you DON’T die in 2016, it means you’re not as cool as you think you are”. I was flippant but kinda furious as well, because although we lost some really important and wonderful famous people in 2016, I lost my best friend on Valentine’s Day, and then my baby brother exactly nine months later.

In November, my brother died. At his funeral I called him “my Sherlock Holmes”. Look, everyone loves Sherlock Holmes. I’m not pretending I’m like the OG Sherlock Holmes fan, but in my family he’s kind of a big deal. From where I am sitting at my writing desk, if I look to my left I can see two copies of The Return of Sherlock Holmes, wedged in with Agatha Christie and John Dickson Carr.

My dead brother was a peculiar, precocious, hyper-intelligent child. I always wanted him to become an FBI agent. He won’t now, because he is dead, but he is still hands down the most remarkable person I’ve ever met. After his wake, having not been alone for for several days, I went home and had a nap. At about 8pm one of my best bitches, Rachel, turned up with pad thai and a bottle of Coke. We wrangled the living room into cosy order, and plonked down to eat and squeal our way into oblivion with the best tool at our disposal – an episode of Sherlock.

I mean, I don’t need to tell you how good Sherlock is, right? You’ve seen it. It’s the biggest television show in the entire world, and catapulted the creepy ginger paedophile from Atonement and Tim from The Office to outrageous levels of international stardom. But just in case you missed the memo, Sherlock is really good.

I have one friend who only watches it for Benedict Cumberbatch, and she hates all of the rest of the acting on the show with a capital H. Which is fine, but you’re wrong Heather. Rachel has the world’s biggest crush on Rupert Graves. Every time his character, Lestrade, is on screen, she makes loud groans. I make them too. So does everyone who has ever seen Maurice.

You see, Rach and I have developed a kind of telepathy about what episode we will watch in any given Sherlock and Coke and Pad Thai session. It has nothing to do with mood or theme, and everything to do with some kind of shared algorithm. We never watch ‘The Blind Banker’ because it’s racist as hell. We rarely watch anything from season three because our opinions are too difficult to navigate – we both think ‘The Empty Hearse’ is a disappointment and ‘His Last Vow’ is too stressful.

If we’re going to watch ‘The Great Game’ (absolutely 100% one of the top 3 episodes of Sherlock) then we HAVE to watch ‘A Scandal in Belgravia’, because you can’t leave the cliffhanger unresolved. Therefore, ‘The Great Game’ and ‘A Scandal in Belgravia’ are best for a Sunday when you have a hangover. ‘A Study in Pink’ is so good and an easy reliable choice if you want to blob around and have a really really fun time. ‘The Reichenbach Fall’ has a devastating ending – good if you’re in the mood for a cry.

So like I said, I’d just buried my brother, and Rachel was there with the food and the drink, and we looked at each other and said ‘The Hound of Baskerville?’

‘The Hound of Baskerville’ isn’t the best episode of the bunch, but it does grow on you if – like me – you have watched it roughly seven times. It doesn’t have enough Mycroft, but it does have an abundance of Lestrade, some really great gay innkeepers, and Rudge from History Boys. Rach and I watched it, and we laughed, and we groaned, and we had a bloody good time. We ate pad thai and drank coca cola and shared a duvet on the couch, and it was really soothing. Sherlock is always there for me when I need it.

So let’s flashback to January 2017: Trump’s presidency hasn’t officially begun, the summer sun is high in South Pacific sky, and we loyal viewers have been gifted three brand new episodes of Sherlock.

For three Monday mornings in January, I took a media fast while waiting to watch the new episodes once they had come out in the UK. It’s the “no spoilers” ritual you have to undertake when you’re part of one of the biggest fandoms in the world. Rituals are important. Rituals set the scene for a different way of doing things. In my day-to-day television watching I’m more likely to binge something while playing games on my phone, but a new episode of Sherlock is special. It’s no rerun of a formulaic procedural. It’s a precious gift to be savoured slowly.

I don’t even care if one of the episodes is a bit disappointing. This is movie-length television, I get to spend my Monday lunchtime watching 90 minutes of Benedict Cumberbatch and Martin Freeman playing Sherlock Holmes and Dr Watson. I ship Johnlock so hard. (I once danced to ‘Single Ladies’ with Martin Freeman. He wouldn’t remember that because why should he, but I do because it was awesome and he did the punching moves.)

After the episode, I wait for people to slide into my DMs so we can talk about it (hello Tamsyn), or for Heather or Hannah or Rachel to FB message me with “WE NEED TO TALK ABOUT THAT RIGHT NOW” or “I HAVE SOME FEELINGS”. I open Tumblr and read all of the new fan theories, then in the evening I’ll Skype Rachel and we can talk about the theories, and assess whether or not there was enough Lestrade in the episode.

Now me and the rest of the enormous mob of Sherlockians have 13 full-length episodes (the Christmas special counts), an hour-long pilot, and a depressing teaser at our disposal whenever the need strikes. And the need certainly does strike: Sick day? Watch Sherlock. Sad? Watch Sherlock. Feel like watching Sherlock? Watch Sherlock. Crawl under a duvet, order some pad thai, clasp tight the hand of a still-living friend, and rush up the 17 stairs to 221b Baker Street – Holmes and Watson are always there.

Click below to watch Sherlock on Lightbox, including the 90 minute feature episode The Abominable Bride: