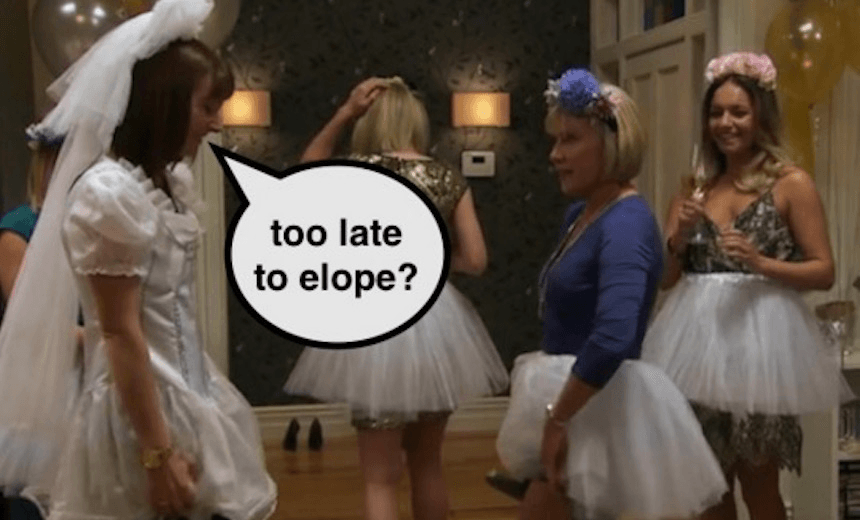 Leanne was on fire this week. Harper’s hen’s party was the event of the year, nay, the century. It was everything a hen’s night usually is: tacky, bizarre and condescendingly sexist. But bloody hell, Leanne, it was TV GOLD.

If only every day in Ferndale was Harper’s hen’s party day. There were tutus. There were flower headpieces. There were games with straws and cucumbers and semi-naked doctors. The only thing missing was a pineapple and cheese hedgehog.

Who cares now if Harper marries Boyd? Unless Leanne’s in charge, their wedding could never live up to her bridal extravaganza of voile and vegetables.

This week Drew rescued a homeless child, wrestled with a perspiring psychotic, was suspended from work, reinstated at work and got his colleagues drunk. Kylie, the man deserves a high five.

Sweaty Gareth slid back into Drew’s life like a wet, bewildered slug.

He left a sticky trail of anger and resentment as he rampaged through Drew’s apartment in search of the well-endowed Millie.

When Drew was suspended from the hospital, Boyd came to his defense quicker than you can say ‘secret man-crush’. Pointing out Drew’s confident gait and keen eyes, Boyd left Rachel with no choice other than to immediately reinstate Drew.

Over at the world’s dullest stag night, Drew prescribed high doses of pure alcohol to liven up the party. Someone call security before Boyd gets out his cucumber and the party spirals out of control.

Love Shortland Street? If you are in Auckland this weekend make sure you come along to The Spinoff Presents: Shorty Street Scandal LIVE at The Basement Theatre, 10pm Saturday 14th.

I wrote five paragraphs taking the piss out of Catan before I discovered it actually exists. This is life imitating art, or something. Shortland Street, stop messing with my mind.

How much did the Emperor of Catan pay to get a weeklong advertisement on Shorters, pre-Christmas no less? More to the point, how do I jump aboard the Catan canoe?

Dangerous things are afoot in Catan Land. The seemingly innocent premise of trading and selling is usurped by subliminal sexual messages that quickly overpower Esther and Curtis. Drunk on the power of colonial consumerism, they take the role-play to an R18 level, if you get my continental drift.

Apparently seafarers and settlers have needs too.

Curtis, put the dice away and let someone else play harbour-master.

4) Leanne, because one power ranking this week is not enough

5) Victoria tells it to us straight

I bet Victoria plays a mean Catan. Perhaps she could challenge Margaret and Curtis to a game, and the winner gets to pash Mo.

6) Rachel and Chris: somebody please put them on the $20 note

They’re the Kiwi equivalent of Demelza and Ross, Anne and Gilbert, Deirdre and Ken. Together, they are the Tane Mahuta of the Shortland Street forest, standing tall above the slender saplings and noxious weeds. Chrachel, we salute you.

What lies ahead for our Ferndale friends, as we inch closer to the end of year cliffhanger? Will Boyd and Drew finally confess their love for each other? Will Leanne accept her calling as a party planner to the rich and famous? Will Margaret tell anything to anybody? But most importantly, does anyone ever finish a game of Catan?