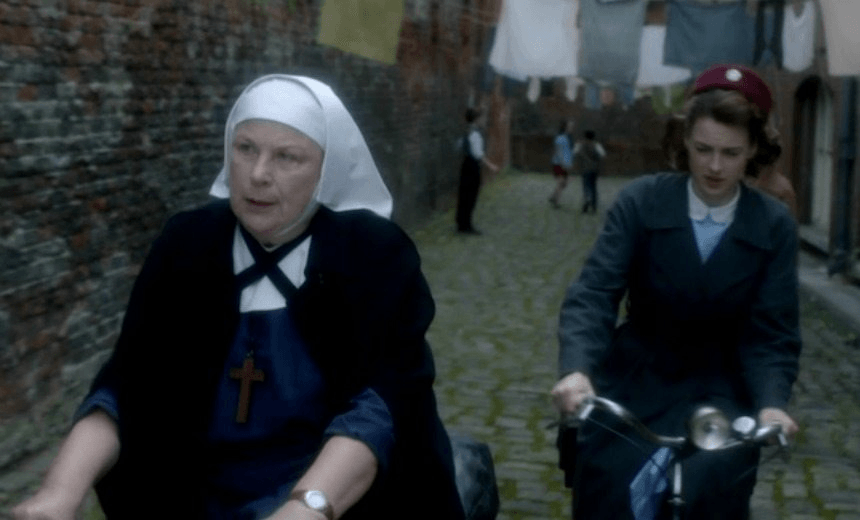 It’s a well-known fact that women are awesome. They also make awesome television, whether its comedy, drama or a bicycle-riding midwife nun hooning off to deliver a baby in the back seat of a car.

Feast your eyes upon this bounty of televisual goodness, overflowing with independent female characters, strong female-led narratives and intelligent scripts.

Also, did I mention the kickass nuns on bikes? Women of television: we salute you.

Sally Wainwright is a flipping genius, and there’s no better proof than the masterpiece Happy Valley. Wainwright created, wrote and directed this tense thriller set in Yorkshire, and blessed us with one of television’s fiercest characters in police sergeant Catherine Cawood (a BAFTA award winning performance by the incredible Sarah Lancashire).

It’s grim but gripping television from start to finish. Happy Valley’s superb acting and brilliant writing will put you through the wringer, yet leave you wanting more.

Written, directed and exec-produced by an all-woman team, Harlots presents the 18th century world of sexual politics from a distinctly female viewpoint, with a few religious fanatics and powdered wigs chucked in for good measure. It’s also busting out of its period-piece bodice with a powerhouse cast including Samantha Morton, Lesley Manville (Mum) and Downton’s Jessica Brown Findlay.

Gather up ye fellow rom-com fans and enjoy six glorious seasons of this delicious comedy created, written and produced by Mindy Kaling. Kaling also stars as main character Mindy Lahiri, a successful gynaecologist struggling to balance her personal and professional life. It’s a delightfully charming watch that will warm the most cynical of hearts.

Top of The Lake

Jane Campion returns to the small screen in a blaze of glory with Top of the Lake, a mysterious thriller about the disappearance of a 12-year-old girl. It’s moody and atmospheric, and you’ll be impressed by both the stunning South Island landscape and Elizabeth Moss’ antipodean accent. Watch for local and international stars including Holly Hunter, Lucy Lawless, Robyn Malcolm and Madeleine Sami.

This award winning Kiwi comedy-drama follows quirky teenager Eve Baxter as she navigates the trials and tribulations of her high school years. Being Eve was co-created and written by Katherine Fry, and features a cast of recognisable Kiwi actors including Fleur Saville, Alison Bruce and Tandi Wright.

Ten Days in The Valley

Another day, another valley filled with misery and pain. Secrets abound in crime drama Ten Days in the Valley after frazzled TV producer and single mother Jane Sadler’s (Kyra Sedgwick) young daughter is kidnapped. Created and written by Tassie Cameron, Ten Days in the Valley takes us on an edgy journey of twists and turns as Jane’s life descends into chaos.

Tina Fey’s experiences as a writer on Saturday Night Live inspired her to create and show-run 30 Rock, a satirical sitcom that takes place behind the scenes of a sketch comedy show. Fey plays head writer Liz Lemon, a heroine who spends her days managing the egos of her workmates and her evenings working on her night cheese.

Watch all these amazing women-lead and created shows on Lightbox right here: