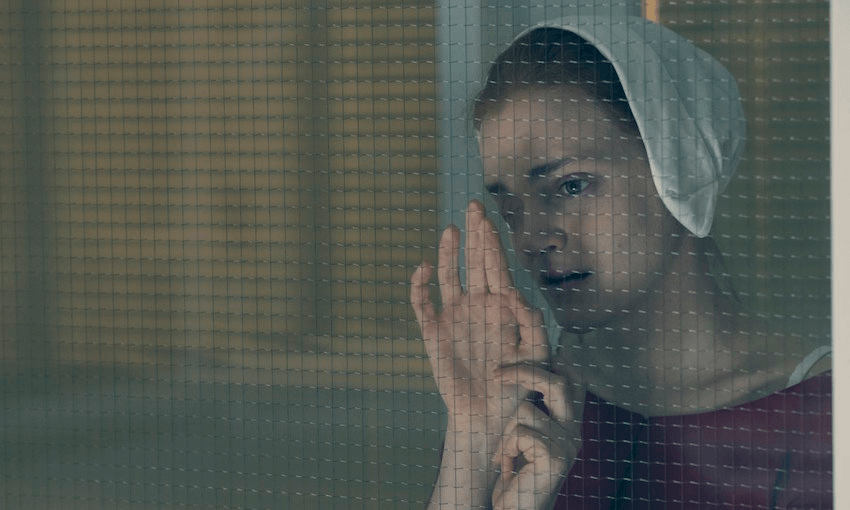 Janine, may the force be with you.

The Handmaid’s Tale recap: Women’s Work, and not the Kate Bush kind

Janine, may the force be with you.

A birth, a betrayal, a flogging. Things continue to get darker on episode 8 of The Handmaid’s Tale, available on Lightbox. Tara Ward recaps.

“Gilead eats you from the inside out,” June said during this week’s episode of The Handmaid’s Tale, titled ‘Women’s Work’. It’s true, Gilead is the bleeding ulcer on the stomach lining of June’s life, and she needs more than an expensive probiotic to counterbalance all the nasty stuff it spewed at her this week. A sick baby, a furious Aunt Lydia and no more fun times using her brain is enough to make a handmaid hide under her cape until there’s nothing left but a half-eaten croissant where her heart used to be.

The episode began on a high, because while the patriarch’s away, the mice have been bonding over forged government documents and Lionel Ritchie records. Nothing to see here, just two members of the lesser sex indulging in some harmless reading and writing to some classic Motown pop. Sure, some might consider this behaviour an offence to God, but so is not finishing that croissant and Serena doesn’t seem to have a problem with that either.

An unlikely friendship developed as June and Serena worked together to subvert the systems that oppressed them, one forged document at a time. Serena admitted she hates knitting, and I hoped June would admit she hates being sexually enslaved by the political elite and/or listening to Lionel Richie records. Sadly, we never got the chance to open that can of dystopian worms, because the Commander returned from hospital. Sorry kids, Dad’s home, the party’s over.

But every apocalyptic cloud has a silver lining. Eden redecorated her and Nick’s apartment with some lovely yellow curtains, the market was restocked with citrus (blessed be the fruit) and Janine replied to June’s handmaid greeting with “may the force be with you.” Bloody love you, Janine, and I wish she’d never heard the news that her birth child was dangerously ill in hospital. It was a serious mood killer. I mean they had citrus at the supermarket, why can’t we all just enjoy the moment.

Sick kids are a big deal in Gilead, because they believe the children are their future, teach them well and let them lead the way. Janine freaked at the thought of not seeing her child again, so June asked for permission for Janine to see the baby while Serena lobbied the Commander for a one-day transfer to let Gilead’s best neo-natal specialist treat the Putnam child. In a twist as delicious as Serena’s half eaten pastry, the best doctor in all of dystopia was WAIT FOR IT a woman.

Of course, party-pooper Commander refused to allow the ex-doctor-now-Martha to treat the baby, because access to proper health care is a right afforded only to a privileged few. Praise be that sort of shit doesn’t happen in real life. Sidebar: Fred is a tool.

Luckily Serena is now an expert at defying her husband and bish bosh bash, Dr Hodgson arrived at the hospital to help little Angela. Dr Hodgson cried as she put on a white coat for the first time in years. Aunt Lydia cried because there was little hope for the baby, and Serena cried because she loves Lionel Ritchie and thanks to her power hungry arse-wipe of a husband she won’t be allowed to listen to him for a long, long time.

There were power plays aplenty, but we must never underestimate the power of Janine, whose force is strong enough to heal the dying. Someone needs to bottle her essence and spread it throughout the land, because the early morning glow of a happy Janine singing to her healthy child brought a smile to Aunt Lydia’s dial like never before. This was the power of the sisterhood, of women working together. For a blessed moment Gilead didn’t seem so bad, until you saw Janine’s bad eye and remembered Aunt Lydia ripped it out as punishment in season one.

Things weren’t so chipper at the Waterfords, where the Commander had his suspicions about what Serena and June were up to in his absence. He added one music box plus one long-stemmed flower together and came up with ‘my wife and handmaid have worked against me to undermine the government in my name’. If this was one of his dystopian Scrabble games he’d spell out ‘FFS’, but instead he started quoting scripture, which FYI is never a good sign in Gilead.

“We should have known better,” June said, possibly speaking about her and Serena, possibly speaking about Eden’s choice in curtains. I should have known better too, because last week I was sure things in Gilead were about to change. ‘Women’s Work’ ended with Serena weeping after being flogged by the Commander and June batting her eyes in submissive apology, and now I don’t know if we’re Arthur or Martha. We’re trapped, trapped in this incredible nightmare. May the force be with us all.

You can watch The Handmaid’s Tale and more on Lightbox right here: