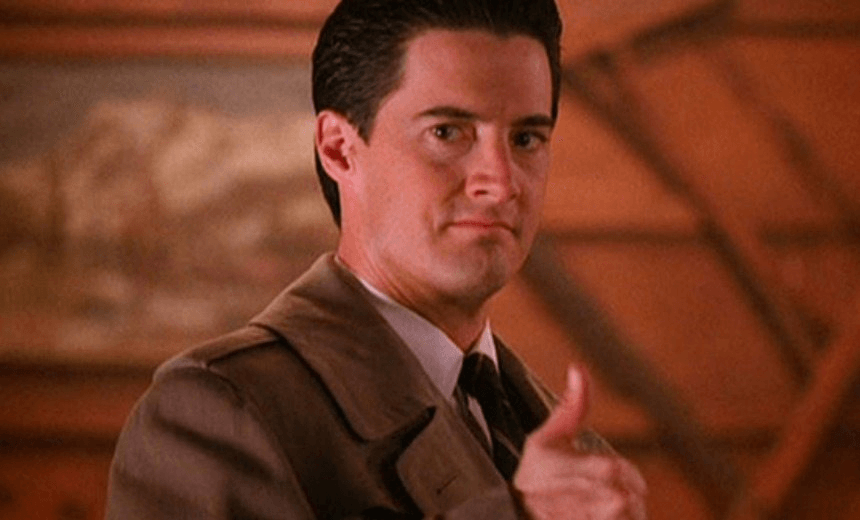 Throwback Thursday: Why Dale Cooper of Twin Peaks is still my TV hero

With the reboot just around the corner, Pete Douglas revisits the surreal early 90s classic Twin Peaks and the role that made Kyle McLachlan a TV star.

When I first came across Twin Peaks, I was drawn in by its creepy weirdness and bizarre vision of small town American life.

What the hell was this show? Why was everyone so damned weird? How can you have soapy bits in a show about a grotesque murder? Who did kill Laura Palmer?

Since the setting was fictional, but somewhere in the American Northwest near Canada, the scenery was a little bit reminiscent of little old New Zealand. In a strange way, so were all the spooky and introverted characters. It doesn’t feel a million miles removed from small town life here.

There are plenty of characters to love, and be utterly disturbed by, in the original series, but my favourite is the supremely wholesome Special Agent Dale Cooper. Played by living legend Kyle MacLachlan, Dale Cooper is an FBI Agent, sent from the big smoke to the sleepy town to solve the murder of local homecoming queen Laura Palmer.

However horrific and serious the criminal acts being investigated are, writing duo David Lynch and Mark Frost pull off a neat trick in Agent Coops. Who would have thought you could juxtapose all that quite modern psychological horror with a hero that has stepped straight out of the the 1950’s?

Clean cut, courteous, and with the greatest head of hair in the history of network television, agent Cooper investigates unimaginable acts of evil with a jaunty smile, a thumbs up, and an oftentimes jarringly gregarious manner.

Here’s just some of the reasons why he is so gosh darned great:

1) He loves a damned fine cup of coffee

Perhaps no character in modern pop culture has loved a good cup of Joe quite like Dale Cooper has. This is the crappy American diner stuff too! Imagine this guy’s reaction to a good flat white! Holy hell.

Coffee is the fuel on which his crime-fighting brain operates. Coop poetically describes how he likes his coffee quite early on as “black as a midnight on a moonless night.”

When rewatching Twin Peaks recently, I started taking my coffee straight black just like the Coop. I am however, a giant, balling man-baby wuss, and this lasted for about two days (though I did feel much cooler for that brief 48 hour period).

2) There’s always time for a slice of cherry pie

3) He solves crimes using his dreams

Agent Cooper perplexes everyone around him by going on about his use of Tibetan mind techniques to deduce the answers to various mysteries. All of this strangeness comes to a head when he has the single creepiest dream in the history of the world, though one that he puts to use later in trying to solve the mystery of Laura Palmer’s death.

I still get chills watching this thing. So many questions, so many hours of therapy needed. WHY IS THE LITTLE GUY TALKING LIKE THAT?! WHAT IS HE DOING IN THE CORNER?! WHY IS COOPER OLD?! WHY HAVE I NOT USING THAT DANCE AS MY SIGNATURE MOVE IN THE CLUB ALL THESE YEARS?

Of course he is! With great hair, teeth and good manners like that how could you not be? There are some great and awkward bits of flirting written for the Coop, but none is more oddball and uncomfortable than when Heather Graham hits the scene as Annie Blackburn, a former nun and Coop’s ultimate love interest.

During the course of the series, Coop defends the good salt of the Earth people of Twin Peaks, protects a cross-dressing colleague Denise Bryson (the remarkable David Duchovny) and stands up for his entirely illegal actions in saving Audrey’s life at across the border. Do the right thing and consequences be damned! God bless you Coop.

Shooting, stabbing, run-ins with the most horrific killers and devious evil masterminds you can imagine, Coop always pulls through. Being the pro he is, he can’t wait to get his suit back on and get back to work. Once he’s had a strong cup of coffee, of course.

Coop records his thoughts about everything from the detail of his investigations what he ate for lunch to a tape recorder, all the while addressing his confessionals to a mysterious woman named Diane.

At first it seems this might be a bureau assistant of some sort, or maybe his boss. As time goes on, it just seems Cooper likes to record all his thoughts, and Diane’s existence is kind of open for debate (like so many things of this show).

Long before nerds ruled the Earth, Coop was letting his freak flag fly. Anyone who doubts the veracity of this has obviously forgotten about the scene of him practicing fly fishing alone in his hotel room from season two. Case rested.

And last, but not least, are Coop’s fantastic and relevant tips for living life. In the end, all roads lead back to a good black cup of coffee.

Make like Dale and give yourself the gift of Twin Peaks on Lightbox below: