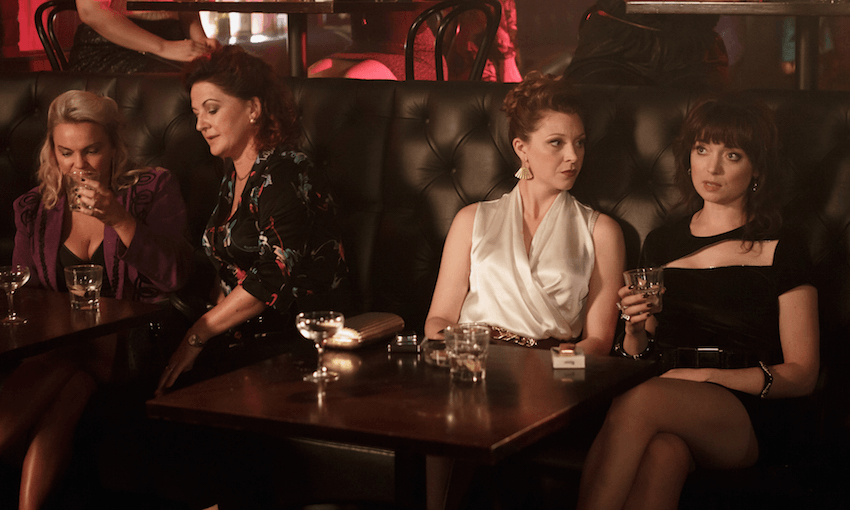 The women of Westside, all cozy up in Las Vegas.

K’ Road in the 80s: Westside and the making of the new Kiwi myths

The women of Westside, all cozy up in Las Vegas.

Westside is back for a fourth season tonight on Three. Sam Brooks visited the set and came back with thoughts on how the show mythologises our country’s recent history.

If there’s one thing I know for sure about the 80s, it’s that there was a lot of smoke.

Correction: If there’s one thing I know about Westside, which is to the 80s what The Block is to real estate, it’s that a lot of smoke makes the illusion that much more convincing.

Entering Shanghai Lil’s on K’ Road, here reliving its past as infamous strip club Las Vegas, is like walking into someone’s very specific view of the 80s. Which makes it the perfect location for Westside to shoot in: Las Vegas always felt like a throwback to someone’s halcyon vision of the 80s, more Rotovegas than its actual namesake.

Hell, you’d probably need to clean the actual Las Vegas up a bit to fit into Westside‘s whole deal. This is probably the cleanest the venue has ever been, including the brief few months where it was a pop-up dumpling joint. Even with an entire film crew crammed into every history-leaking nook of the place, with two dozen extras dressed up like your unfortunate aunt Sharon who remembers seeing Hello Sailor back when they played in bars, it still feels pretty damn spotless.

The scene is Cheryl West’s bachelorette party, which she isn’t at because she’s throwing up at home. They’ve decided to go to a male strip club, which is hilariously revisionist given what this actual strip club used to be. Less hilariously revisionist, but no less gratifying, is seeing director Caroline Bell-Booth maintain a cool and calm dominance over the shoot. I get the feeling that they’re behind – is any film set ever on time or ever ahead of time? – but everything that needs to happen is lightly and confidently asserted.

In Las Vegas, a venue that had a history of being at least three parts exploitative and sad for every one part empowering and enlightening, it’s nice to see a woman running the show. That’s especially so for a television series that is so dominated by women on screen – Antonia Prebble, Esther Stephens, Sophie Hambleton and Ashleigh Cummings are its emotional anchors; the men are just the macho eye candy.

Seeing the televisual sausage being made usually leaves me feeling a little disillusioned. It’s hard to keep believing in screen magic when you can see how performances are constructed out of a few rushed notes and balanced between how few takes they can afford to get and how many they can afford not to do. Filmmaking isn’t seeing the magician cut a girl in half, it’s seeing the girl crouch herself into the top half of the box.

This is the opposite though – it’s less like seeing the sausage being made and more like seeing the myth being built up. To a certain extant, that’s down to the mana and history of the Las Vegas club: it’s a place with a lot of ghosts, and you can bet at least one or two are hiding in Antonia Prebble’s hair and making sure it stays up for the entire take.

My next visit to the Westside set is the flipside of the first. Now it’s Wolf’s bachelor party, and it’s being shot within spitting distance to Shanghai Lil’s – at Galatos on the other side of K’ Rd. Where Las Vegas needed to be stripped down to fit into Westside’s myth of the 80s, Galatos – a barebones venue where I’ve seen everything from earnest student plays to messy old dude gigs – has to be dressed within an inch of its life

Last time the essence of the old Las Vegas seemed to seep into the show, but here the set really has to expand itself and its spirit to fill Galatos. You can feel the cast and crew building themselves up for it – the gang has broken into a friend’s clubhouse, they’re high on cocaine, they find some guns, it’s a more macho and a more energetic scene. Also, it’s towards the end of this particular shooting block, so there’s the energy that comes with a production almost being done – just one more burst of activity, and then you can properly party like the people you’re pretending to be.

Walking home from the second visit, I pass the famous come-hither woman billboard on top of the old Las Vegas. It’s a billboard that signals so many things – a risky choice of a second/third/fourth location for your night, a welcome for an end-of-night kebab, something your mother had to explain to you as you walked past it as a child – and I realise that so much of Westside‘s success comes from its faithful depiction of New Zealand in the 80s.

Or at least, what some people regard as faithful. There’s no way the actual 80s were this clean, that the hair was as high, the makeup as flawless. It’s an 8.30-crossing-into-9.30 view of what West Auckland was in the 80s, like how Outrageous Fortune was to the early 2000s.

And it taps into the same kind of mythmaking that Outrageous Fortune did. It’s not a reflection of reality – Westside has that reliable South Pacific Pictures gloss (not to be mistaken for Gloss), a reflection of what we want reality to look like. It’s reality with close-ups, actor-pretty people and dramatic arcs that continue over twenty-two episodes a year and end with a cliffhanger

In the case of Westside, it’s what a certain generation wished our reality looked like. Did people have stag-dos with gunfights, cocaine and dubiously Italian-sounding friends? Absolutely. Did everybody? Absolutely not! But it’s more fun to remember and mythologise the people who did. There’s a reason why the show ice-skates through our history, including a memorable arc about the Springbok Tour – it makes people who lived through those times think back and reflect on themselves. Who were they? What did they do?

We tell ourselves stories in order to live. We make myths of those stories to make our memories as real and as vivid as they were when we were experiencing them. In ages past this was done around the campfire, over roasting meat on the spit, over whatever people drank instead of beer in centuries past.

The fourth season of Westside starts tonight on Three. You can watch the first three seasons on Lightbox right here.