Bachelor superfans Jane Yee and Tara Ward launch themselves into the highs and lows of the second week of The Bachelorette NZ.

Subscribe to The Real Pod on Apple Podcasts, Spotify or your favourite podcast platform for more The Bachelorette NZ chat.

Tara Ward: After three nights of dates, mates and moley updates, I have one question for you, Jane: how much do you like cheese?

Jane Yee: I like cheese. I’m not a weirdo!

TW: I bloody loved the extreme cheese content on The Bachelorette NZ this week. The cheese platters upped their game (a single rose hidden among the brie and crackers — what is this, the future?), the bachelors dropped some cheesy lines (no, I’m lost in YOUR eyes), and Lexie and Hamish’s one-on-one date gave us one of the finest moments in New Zealand romantic history. They both like cheese! Let’s call this whole thing off, we have a winner. 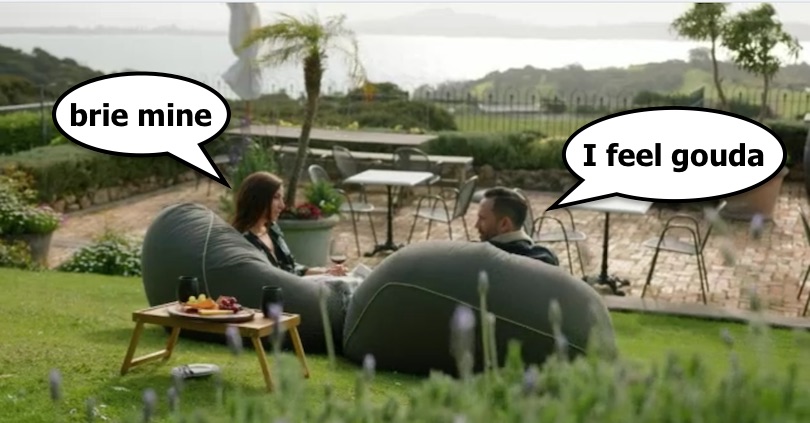 THESE TWO CHEESE WEIRDOS HAD A LOVELY TIME.

JY: At first I was aghast that Toddy didn’t notice the giant rose on the cheese plate, and then I laughed at myself for being such an idiot. Of course he didn’t notice it, because… cheese! Also, can you blame the guy for being non compos mentis after being hurled from a great height, not once but twice earlier in the day?

TW: I don’t know what “non compos mentis” means, but I hope it translates to either “of course girls and boys can be identical twins” (keep on believing, Vaz) or “never stop being you bro” (Jake, who never stops being nice) in the Bachelorette NZ dictionary of hopes and dreams.

JY: Well put it this way, you’d have to be non compos mentis to think that boy/girl twins can be identical. If you’re still struggling to follow, it means not of sound mind. 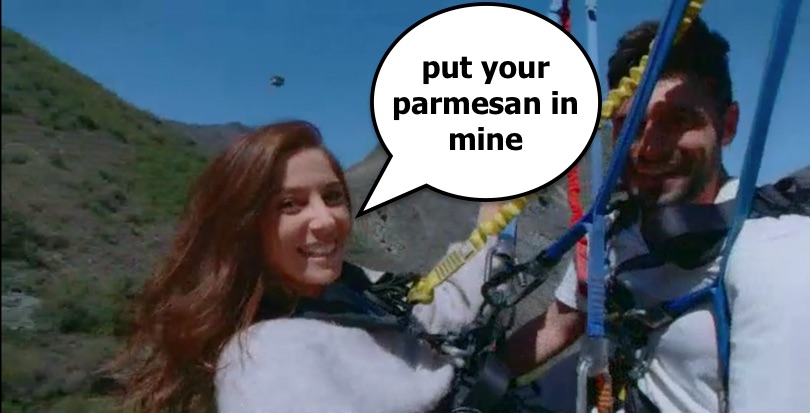 LEXIE AND TODD HARNESSING THEIR FEELINGS.

TW: I must admit, I was not of sound mind after wading through these three episodes of our beloved series, which were low on drama but high on raft-making. There’s nothing like constructing a boat out of plastic and paddling across a pond to show the depths of your devotion to Lexie, and yet, we still had to wave farewell to brave bachelors Dave, Nathan and Zach. Were you sad to say goodbye?

JY: I was sad to see three actual characters leave the show in quick succession. A guy who eats a raw egg, shell and all? Gold. A guy who spends the entire cocktail party whipping up a love song? Weird, but great. A guy who sounds like Ray Romano and would rip off his very own finger to take the win in a low stakes game of backyard basketball? Take him to the final imo.

Tara, something has been bothering me far more than the loss of three of the greats. Where do you stand on sharing your meal on your very first date? 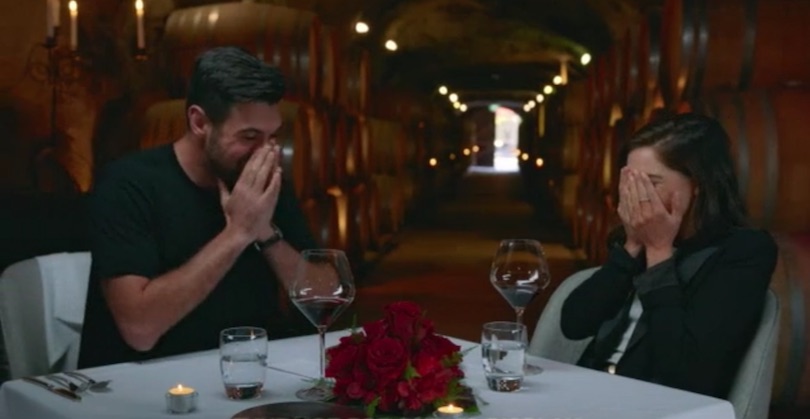 TW: Listen, that first date would be our last. Sharing food should not be legal. I’m Smithy from Gavin and Stacey, I’m Joey from Friends. Some say sharing is caring, but I say: order your own food and get your paws off my plate, you big meal stealer.

Sorry, you’ve struck a nerve. I’ve gone all non compos mentis. Now I’m Zach, walking off in a huff after he lost that intense game of handball at the mansion.

JY: Oh my god Tara, I feel the exact same way. I’m starting to think we might be the greatest love match to come out of this season. If Lexie had tried that with me I would’ve grabbed my plate and scurried off between the barrels, safe in the knowledge it would never have worked between us anyway. 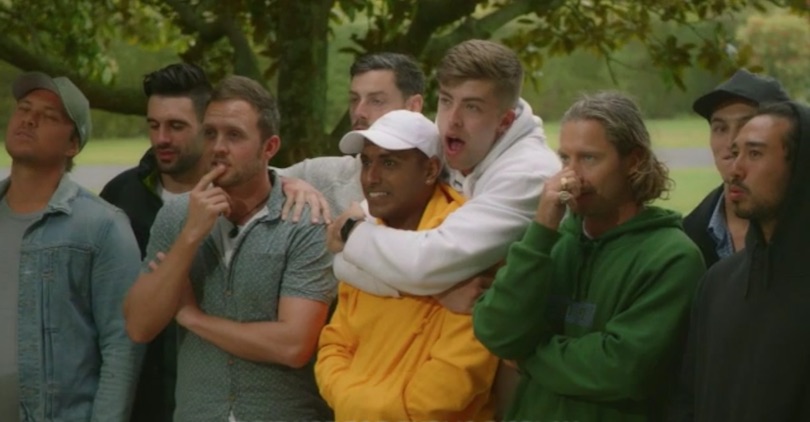 THE LADS LADS LADS RECEIVE A VISION OF HOW FANCY THE QUEENSTOWN CHEESE PLATTERS ARE.

TW: You know who it did work between? Lexie and Hamish, who went ziplining, and Lexie and Todd, who went bungy jumping, and Lexie and Josh, who…fed some giraffes. I know a lot more about giraffes now, but still not much about Lexie’s ideal man. These men are three same-but-different flavours on the cheeseboard of life.

JY: I’ll tell you who her ideal man isn’t. Quinn from season one’s brother. Whatshisname. He absolutely nailed the baby daddy challenge, and yet she awarded the one-on-one time to Matt, whom she detests only slightly less.

TW: Jake? He was robbed in that baby challenge. He was clearly the best pretend daddy to fill a vase with flowers and stop a table from blowing over. That’s Parenting 101, and he nailed it. 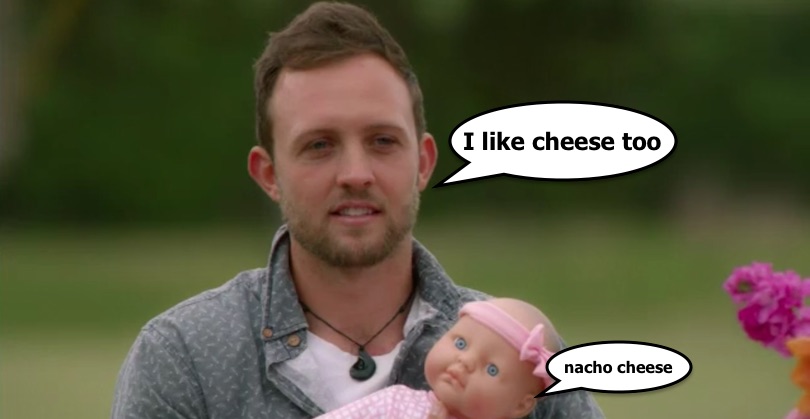 Everything will be okay, Jake.

JY: Yes! That’s the one. Not to be confused with Jack, whom I also hope is not Lexie’s ideal man, because I think he might be mine.

TW: Please find out his position on meal sharing before you make any firm decisions.

JY: Maybe I could ask cousin Sarah the MOLE to do some digging for me. Omg. Is that where the term “mole” comes from? Because they dig? I’m sure it’s not, but it should be.

TW: Sadly Sarah the Mole has burrowed her way out of the show, which is a shame, because surely there’s still dirt to be unearthed now the bachelors have flown to Queenstown. This is the chance for these lads lads lads to enjoy some smooth criminal man-wrestling on a completely new island, an opportunity of a lifetime indeed. Tempers are beginning to fray though, and Paul especially seems to be a bit tetchy, despite being shacked up in such a picturesque setting.

JY: Oh, you mean the amazing mansion that Josh delightfully described as a “prison on planet bullshit”?

TW: That’s the one! Love me a trip to Planet Bullshit. Five stars, would bach again.

JY: And bach again we will! Next week, in fact. Until then we must stand strong like a vase of flowers in gale force winds.