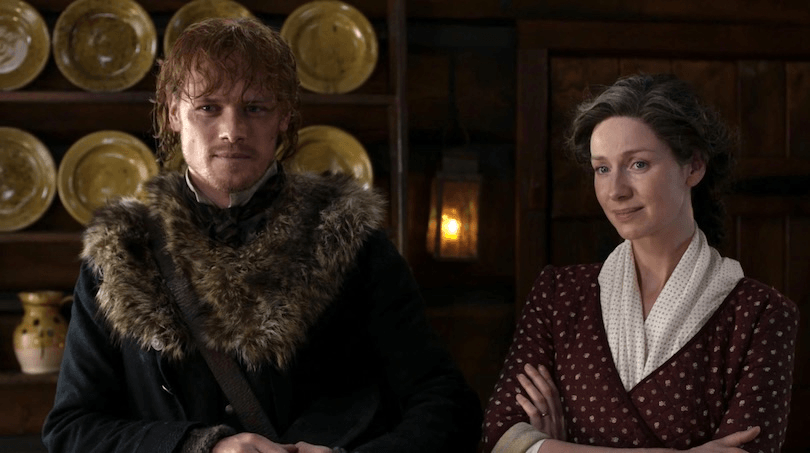 Look at how much love these two are radiating.

Outlander recap: A long snake in a long drop

Look at how much love these two are radiating.

Last week saw a hat-eating pig on Fraser’s Ridge, this week there was a snake in the dunny. What other joys await us in the next episode of Outlander? Tara Ward finds out.

When Outlander begins with a snake stuck in a long drop, you know you’re in for one heck of a ride. Toilets, so early in the episode! We can’t blame that snake for hiding in the loo, because we’ve all seen those glorious Fraser arse cheeks, and who hasn’t wanted a bite of that peach?  It’s human/snake nature, it’s common sense, it’s the circle of life. Hakuna matata, everyone.

This week something else emerged from the bowels of the earth, ready for a taste of Jamie Fraser: old mate Lord John Grey. He climbed to the top of Fraser’s Ridge to see Jamie, dragging the fruit of Jamie’s loins with him.  Poor wee Willie was sucked dry by leeches the minute he arrived, forced to use the privy instead of a chamber pot, and had the same hair cut as me in 1991.

Mullets ahoy, because there was plenty to love this week, like Jamie’s delicious tricorn and fur collar combo:

It was a treat to see Lord John, even if he did interrupt Jamie sawing some wood. I’m here for all the Jamie wood-related content we can get, and Lord John’s story that he was ‘in the neighbourhood’ doesn’t cut it. Nor is his story about him ‘suddenly’ coming down with the ‘measles’, because catching with a life-threatening disease just to rest his festering head on Jamie’s pillow for a few more nights sounds highly suspect to me.

Lord John’s arrival made everyone on the Ridge jumpy.  Murtagh was pissed off that Jamie didn’t tell him he had a son, while Lord John was annoyed that Claire looked so contented. Claire was irritated that Jamie and Lord John had something going on while she was stuck in 1953 trying to get her gas stove to work, and I was grumpy about the fact nobody mentioned Fergus and Marsali’s baby. That kid must have been born, gone through puberty and be ready to leave home by now.

Also, is Brianna stuck in that stone? I need to know.

Nobody had bigger beef with Lord John than our beloved Murtagh, who reminded us that Lord John was the Ardsmuir boss who let Jamie and Murtagh eat rats, and represented all the Redcoats who ever screwed them over. The ghosts of Colum and Dougal cheered from tartan heaven as Murtagh went to town on Lord John, shooting down his proclamations that everything Governor Tryon was doing was tickety-boo.

Jamie, however, was firmly in Lord John’s camp. John was a mate who’d raised his son, so it didn’t matter if Tryon had sent Lord John to test Jamie’s loyalty, or if he’d come solely to quench his insatiable Jamie Fraser thirst. Jamie accepted him without question, just like he accepted King Louis XV the time he caught him pooing in public. Toilets and Jamie Fraser! Their paths are forever linked.

But shit got real when Lord John came down with the measles. Jamie and William retreated to the great outdoors to avoid catching the disease, where they did cool stuff like tickling trout and gutting stags. They slept on a carpet of deer intestines and fish bones, and this was the best time Jamie had had since he talked monkey bites with Bonnie Prince Charlie in a Parisian brothel.

It was all fun and games until that little shit William ignored Jamie’s advice and crossed the Treaty Line. A group of angry Cherokee descended upon them, and as Jamie was about to be killed, William admitted it was his fault and begged for forgiveness. Not sure why the Cherokee changed their mind, was it the distractive power of William’s mullet? Got me out of some sticky situations in 1991, also worked for William in 1768.

Back at Fraser’s Ridge, a splotchy Lord John was in a right state until Claire performed acupressure on his eye sockets and cured him completely. Is there no end to her talents? The fever invaded John’s honesty glands and he admitted to being jealous of how satisfied Claire looked. It seems spending every night with a Scottish love machine makes ginger rainbows spray out of every pore, and who wouldn’t be envious of that?

I hear you, Lord John. Thinking about spending the rest of my days married to Claire and/or Jamie makes me break into such a hot sweat that I have to press my thumbs into my eye sockets and imagine a trout being tickled so hard it starts to giggle.

It was a miracle that anyone survived the Grey’s visit. Claire told John to eat lots of “squash, carrots and liver” and sent them on their way, while Jamie stared at his son and imagined the day he’d also turn into a stag gutting, trout tickling superhero. Claire and Jamie celebrated the Grey’s departure with a hot bath, a new wedding ring and a shedload of ginger kisses, while somewhere in the dark recesses of the Fraser long drop, a toilet snake curled into a ball and dreamed of sweet, juicy peaches.