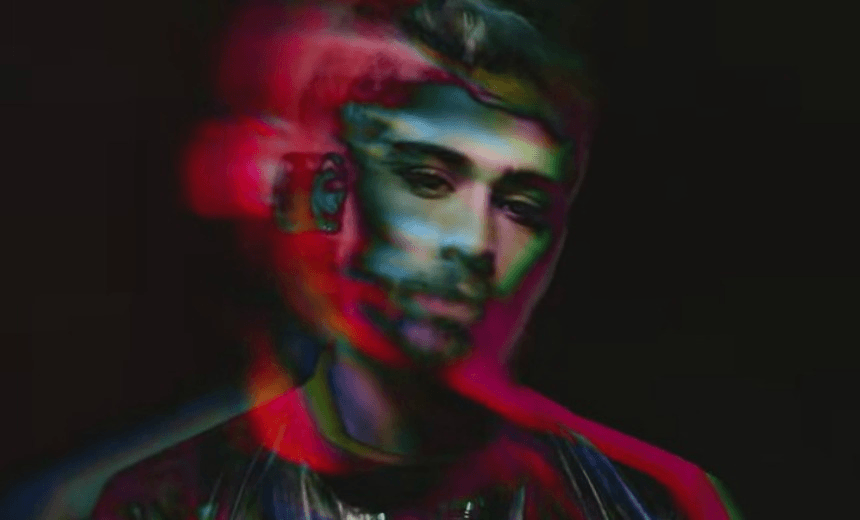 Steve Braunias watches the historic moment that Zayn Malik triumphed over his old 1D posse for the number one spot in The Edge TV’s essential Fat 40 countdown.

What to make of Zayn’s comeback at the expense of One Direction? The pop charts on our last two remaining music channels all told the same amazing story. It was on the MTV Official Top 20, it was on The Edge Fat 40 – it was on every chart, everywhere. It was immense, shattering. Imagine the grief and fall-out in the corporate headquarters of One Direction; someone’s head surely rolled, an advisor, an agent, one of those schnooks.

Charts are so great. They have a simple, devastating narrative: the countdown. You never know what might happen, you never know how the story ends. Who’s slipped down the charts, who’s made a smash entry? Who’ll have the number one hit? When oh when will fucking ‘Hello’ be a distant memory?

One Direction came straight in at number four with their new song ‘History’. Another strong showing for the band, whose previous song ‘Perfect’ also made the top 10. Interesting video, too; ‘History’ told the epic journey of 1D through the ages, and dared to show the face of Zayn. It was at once a sad reminder of his fall from grace and a powerful statement that 1D had survived without him.

The video showed that 1D were still looking good, still making songs and videos and girls cry – poor old Zayn! Why’d he leave? It was bitter-sweet, watching footage of him horsing around with his former band mates. Where was he now? You never heard a peep from him. He’d sunk into oblivion, just another pretty face gone to hell, counting his millions in that dark room reserved for pop’s losers. He’d fucked up.

Number three was that lame remake of ‘Fast Car’, with a girl on a scooter and some wanker on a horse. Number two was Justin Bieber’s ‘Love Yourself’. Number two! What? It’d been number one for weeks, and it was so good. What could possibly have outcharted it? Something inexplicable, maybe a remake of Adele’s hideous ‘Hello’?

Number one was Zayn. Zayn, the fallen angel; Zayn, assumed to be a nobody c/-nowheresville. Zayn, with a funky, moody, immediately brilliant new song, ‘Pillowtalk’. The video was trippy and adult. He’d dyed his hair grey. He didn’t smile, not once. He looked sensitive; mostly, he looked like the only thing that had ever been on his mind was sex.

Imagine the grief and fall-out at 1D Inc… Whose stupid goddamnned idea was it to film a video looking back at their past? It looked so lame next to Zayn. Zayn had moved on. In his video, he hung out with his gorgeous girlfriend, model Gigi Hadid. 1D were still hanging out just with each other, stuck pulling the same old poses, their arms around each other like the last drunks at a party. Once you saw Zayn’s video, it looked like 1D were actually holding onto each other for dear life.

It forced you to take a revisionist look at their pop career AZ (After Zayn). Their first release was that boring one where they wore spacesuits. It didn’t make a lick of sense, but in retrospect it was a sign the band were lost in space, floating in a tin can far from anywhere. Then there was ‘Perfect’. Great song, hot video – or was it? Wasn’t it another sign of uncertainty?

For a start, the music ripped off the chorus to Taylor Swift’s ‘Style’. God knows how they got away with that. As for the song’s statement, it was all so cynical – they weren’t interested in love or romance, what they wanted as “a secret little rendezvous” in a hotel room at the InterContinental. Again, whose idea was that? The four ageing roues mooched about in their rooms, by themselves, waiting for their one-night stand. They may as well have called the song ‘FHRITP’.

Zayn’s video doesn’t have a bar of that sort of thing. The only woman in his life is his girlfriend. He loves her, she loves him. It’s grown-up, it’s normal. In the battle for supremacy, Zayn has achieved one of the great upsets in pop history. 1D look like the name of their song. Poor old Louis, Niall, Liam and wassisname!