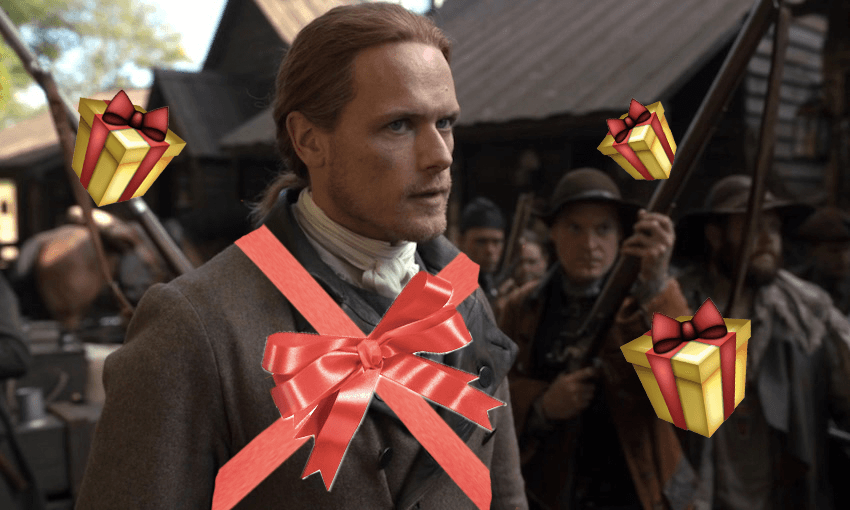 Outlander recap: Jamie Fraser is the gift that keeps on giving

Jamie dances like nobody’s watching, Claire finds herself a new surname, and Roger’s going to sing until someone tells him to stop. Tara Ward recaps episode four, season five of Outlander.

I know what you’ve been thinking about this past week. It’s been on my mind too, so I’m pleased to announce that the goats of Outlander are doing just fine. In fact, everything was fine about this week’s episode, which sang like a songbird, or at the very least, an 18th century passenger pigeon. Episode four felt like the Outlander of old, a feast of layered storylines and delicious details and wry humour, and I was here for it like a horned up goat battering the crap out of a locked cupboard door.

The fun began when Roger led the militia into Brownsville, a tiny town filled with angry locals who fired at Roger before he’d even got off his horse. It was a long story, but the angst involved Morton, a married man from the militia who’d had an affair with a Brownsville woman named Alicia. Alicia was bethrothed to another man, and when news of their secret liaison reached the alpha males of the town, they were fuming. Fuming, I tell you! Roger hid behind a box and prayed for it to be over, which is exactly what I did the last time I saw Stephen Bonnet on screen. My hamstrings ache just thinking about it.

Being shot at in a feral backwater was not what old mate Roge signed up for when he put on those knickerbockers at Craigh na Dun. With Colonel Fraser away, Roger was in so far over his head that he needed a snorkel and some flippers, but somehow his idea to get everyone in Brownsville drunk and serenade them worked a treat. Sing along if you feel like a room without a roof, because Plan B just arrived, and it looks like this.

The Frasers were back in charge and all was well, apart from the fact the entire town was off its chops and the Beardsley twins’ tonsils were out of control. It was madness, but also a bloody good time. Even Jamie felt compelled to cut some shapes on the dance floor, busting out a magnificent sword dance that I might or might not have watched eight times in a row and twice on slow speed rewind. Jamie Fraser is the gift that keeps on giving, and if I don’t bust out a dance tribute the next time I’ve had three too many shandies, please revoke my Outlander card and send me to the Idiot Hut, pronto.

Even better than a jaunty sword dance were the quieter moments between Jamie and Claire, as their love continued to bloom like a good type of mould. These tender, thoughtful scenes elevated the episode out of the Brownsville mud and reminded us why we adore the show the way we do. We can’t quit you, Outlander, and now the magic’s back, I want more. I am a humble townsperson raising my aleglass while Roger sings a rousing ditty that I only know one line of but will nonetheless shout out until I am hoarse. More, bonny laddy! More, bonny hornbags! More, more, more!

Enjoy it while it lasts, friends, because I can feel in my waters that trouble lurks on the horizon. I wouldn’t trust those Brownsville men as far as I could throw them, while back at Fraser’s Ridge, Brianna worried about Stephen Bonnet. The fabulous Marsali knew something was amiss, so she cheered Brianna up with a story about how she killed her father. Don’t panic, Marsali just wished him dead and then he died in prison, but the moral is, worrying doesn’t help. Bad people die eventually anyway, it’s the circle of life.

Hakuna matata to Claire too, who was horrified to discover her modern medical advice had been printed in the local newspaper under the psudeonym ‘Dr Rawlings’. It seems Fergus mistakenly gave her secret writing to the printers, and the rest is both history and a mystery. It was not good news for a white witch trying to keep a low profile. “Beauchamp, Randall, Fraser, now Rawlings,” Jamie joked. “Do you have another husband I should ken about?” Back on the swords, Fraser, show me how those knees bend.

The rhythm is gonna get you on Outlander, if your tonsils don’t get you first. While Morton and Alicia rode off in search of their happy ending, Claire prepared to take the Beardsley twins back to Fraser’s Ridge so she could operate on their pustulent throats. Jamie sent Roger home too, which left Roger’s ego in tatters until Claire reminded him that Jamie trusted Roger with the thing he loves the most. No, not the goats, but his wife, Dr Claire Rawlings. Roger was happy, Claire was happy, and Jamie loves to dance. What a week.

New episodes of Outlander arrive every Monday on Lightbox.