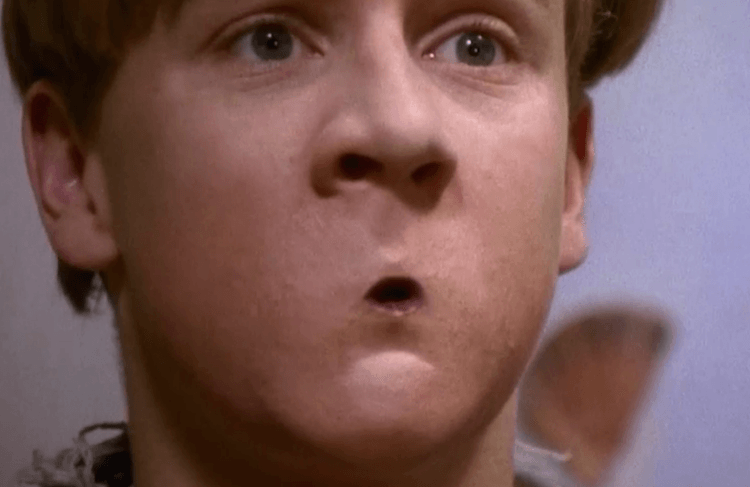 Throwback Thursday: Scaley Fingers, Scarecrow Stalkers and Cabbage Babies – The Most Horrific Moments in Round the Twist

My primary school had a reliever teacher called Mr Anchor. He would cycle in from the next town on a rickety bike, absolutely laden with bags of trinkets and musical instruments. If your class had him for the day, you could expect nothing more than to sing an acoustic version of Alanis Morrisette’s ‘Ironic’ every half an hour, and watch Round the Twist videos till belltime. There are two things I am certain of: the first is that Round the Twist is the scariest children’s programme ever made, and the second is that Mr Anchor was definitely not a registered teacher.

For those balanced, trauma-free souls who might not know, Round the Twist is an Australian children’s programme that began in 1989. The story follows the bizarre life of the Twist family – three children and one father (that’s the first of many unconventional twists right there). If you thought that was kooky, you should wait till you see their house! It’s a lighthouse, and it’s the most normal thing about the show.

The first two seasons (1989 & 1992) are the best, and by far the most unnerving. The plotlines are lifted directly from the work of the great Paul Jennings, a surreal children’s author responsible for convincing a whole generation that drinking cod liver oil and eating muesli at the same time will make a tree grow out of your nose. I know he’s no scientist, but to this day I am yet to go near that combination.

Every time I think about Round the Twist I get a terrible feeling in my stomach, akin to when you see a pigeon hobbling through wet rubbish with a gammy leg. Rewatching the show now, I realise why – it’s bloody terrifying. Just listen to the theme tune and tell me your skin hasn’t crawled off your body and gone to make a new life for itself on Waiheke Island:

If you need further evidence, please read on. I went to a very dark place in my mind to recall the most unnerving moments in Round the Twist history. Enjoy.

This one is the worst. The gang find a chest of ye olde clothes that has washed ashore. The contents are clearly haunted – as all clothes in ancient chests are – but that doesn’t stop them from donning their new ghostly garb. Surprise surprise, the clothes are enchanted and the kids suddenly how to do circus tricks. Fine and dandy, stop there – I definitely wouldn’t put the clothes on the scarecrow making a bad thing happen:

I don’t know what the insinuation of that wild long scarecrow tongue is, nor do I want to. What does he want with the poor girl?! Good heavens, he’s headed for the house.

It’s dark, it’s just so dark. This sign appears within the first bloody two minutes of episode one. There’s a rude awakening for someone who hasn’t even figured out how to tie their shoes properly.

Disgusting. A new kid starts at school, and is constantly teased for wearing wool gloves at all times. Linda Twist befriends/seduces him, eventually coaxing off his gloves to marvel at the multiple rows of nails. She grabs some nail clippers, and we never actually see what happens next. I can’t get my head around what she must have done to those extra nails. There must have been so much blood. This episode put me off pushing back my cuticles for the rest of foreseeable eternity.

It’s everyone’s worst nightmare – Santa proves to be not only real, but a homeless-looking man with long claws who can curse you into having a tiny mouth. Pete Twist gets his mouth shrunk like the guy in that mini Burger Ring commercial, and talks at man-in-a-box level volume. Look at those prosthetics! Tell me your mouth isn’t tensing up right now. Horrible.

Bronson falls in love with an ice sculpture, getting stuck to her lips when he kisses her in a back alley. At the end of the episode, Bronson manages to detach from the sculpture by running into the ocean. When he surfaces, he sees a girl nearby that looks just the sculpture. She is suggestively licking a blue ice-cream. It all feels very Lynchian:

Father Twist tells him that the girl is his cousin, and he modelled the ice maiden on her looks. Bronson grins up at her. The young cousins walk down the jetty hand in hand, straight into their new life of pure incest.

In this episode, the outside toilet is haunted by a man who “died on the dunny”. Ol’ Dead Man Ned now haunts the long-drop like a bad smell, peeping through the keyhole at any opportunity. That seems like a fine plotline to put in a kid’s TV show – a classic dead old man perving on you at night. Frightened by the transparent pedo eyeball, Pete drops his dental plate in the loo. They take a trip to the loo lost and found (that’s fine) to retrieve it. It’s really dark stuff.

The youngest Twist, Bronson, ventures out into the cabbage patch one day and digs up a goddamn green baby. The baby immediately thinks that Bronson is his parent, and starts holding his breath and turning blue whenever he leaves it alone for too long. Horrifying. There is no strongest contraceptive than this episode of Round the Twist. The baby has to go to school with Bronson and everything, otherwise he’ll cark it. Just your average responsibility for a nine year-old.

The episode ends with some more freaky green people emerging from giant cabbages and taking the baby back to its rightful home. It’s almost like Australia has some residual guilt about stealing children or something, weird.

8) A Bully Does a Disgusting Spaghetti Vomit Explosion (S01E05)

Just like the Bruce Bogtrotter scene in Matilda, there seems to be some bizzarre childhood affinity to eating heaps and vomming everywhere. In this episode, a spaghetti eating competition at school (that’s fine) is rigged due to a magical remote. The bullies use the remote to speed up one contestant’s eating, to the point where his stomach bulges and he barfs on everyone. I believe it is the prequel the Adam Sandler’s Click, but I could be wrong.

Bronson gets roped into some horrific underground Fight Club-style pissing contest at school. The little tyke can’t reach as high as the big boys, so he enlists the help of some spooky water. I don’t like the way that droplet looks, I especially don’t like the idea that it somehow embodied his urinary tract and got involved with his peen. Terrible.

Baby Twist keeps his shoes on for six months after realising that he can’t smell his own feet. Once they are “ready” he unleashes them on innocent locals, causing them to go into a coma. The yellow mist really grossed me out, and prompted young me to start secretly using Gran’s Remedy out of paranoia. No child should have to go through that daily anguish.