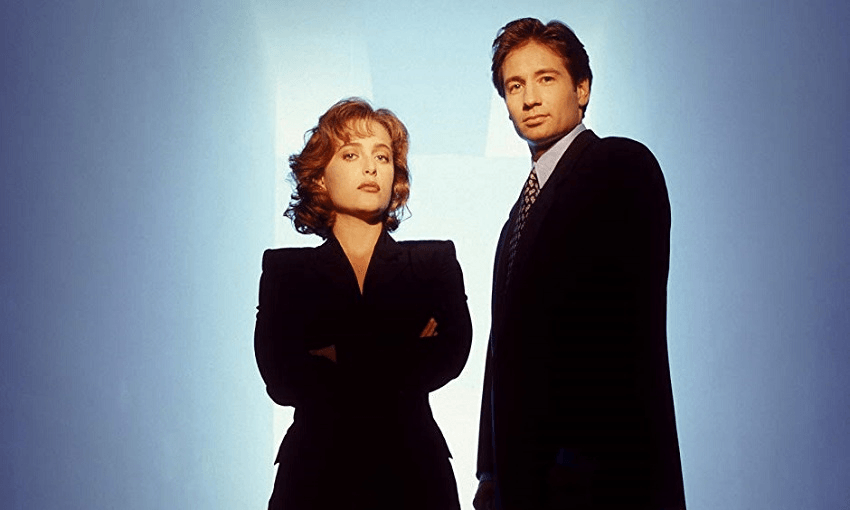 Trust no one: A tribute to The X-Files on its 25th birthday

The groundbreaking sci-fi TV series The X-Files turns twenty-five today. Sam Rutledge writes a love letter to the show and the things that make it special even now.

I have something to confess. When I was in my teens, I was one of two moderators for a Livejournal community dedicated entirely to watching episodes of The X-Files with other fans. My friend Alexandra and I wielded absolute power over the members of that place, so much so that we had our own private community page where we would talk shit about how often we polled with Dreamland Parts I and II as our most desired episode to watch during our “viewing parties”.

That’s all to say, in a real nerdy and vaguely upsetting way, that I’m a fan of the show.

It’s hard to believe it’s been 25 years since The X-Files first aired. My discovery of it came a little later than some, but still well before you were able to scream directly at TV stars on Twitter. It would be an understatement to say that the show had a very formative influence on me. I have The X-Files to thank for properly catapulting me into the kind of person who would mod a community on the internet, and I must also thank it for giving me such a lasting appreciation for exactly one character.

To this day I am ride-or-die for Dana Scully. There have been few characters on TV who have ever come close to being as important to me – in no small part because I strongly identify with the fact that she regularly finds it hard to do her job because she’s so short.

It’s unfortunate that The X-Files is a world of men. As capable as she was, it’s tough now to watch what Scully had to shoulder as she was often the sole woman in a scene, doing the work to be feminine and tough and tender and fatigued, all at the same time. She was also funny and devoted and brave, despite several of her family members dying as a direct result of her involvement with Mulder, a man who wouldn’t know how to give up a cause if he tried.

Scully did what writers apparently thought was previously impossible, and I firmly believe that The X-Files (at least the first few seasons) is required viewing for anyone who wants to understand how we have the women we’re watching on TV today.

And it seems we’re lucky we even met Scully at all. The X-Files was a cult hit, but I was surprised to learn that it started as a roll of the dice. You’d never get away with saying you don’t know who Gillian Anderson is now, but in 1993 she hadn’t done anything except move to Los Angeles, and David Duchovny had like three IMDb credits. It was a weird sci-fi show on a network that hadn’t made a name for itself, and it was daring to cast two people no one had ever heard of. Ballsy move.

Nine original seasons and two reboot seasons later, the show is still finding new viewers. Unlike gelled salads and fidget spinners, it seems to be timeless, with the 10th season garnering the kind of viewers it used to get during the end of its original run.

I watched seasons 10 and 11 without much prejudice. A show born in the 1990s, trying for a rebirth in 2016? It was unlikely to hit the notes it used to, so my expectations fell firmly into the camp of “the show will be on TV”. I watched the first episode sharing nachos with strangers at a bar in NYC, and regardless of the content of that episode, it felt like I was coming home.

There’s nothing I want to watch more than two dumbasses fumble around on opposite sides of the paranormal, Mulder still desperate to believe and Scully firmly sceptical after all this time (girl, you’ve been literally abducted on several occasions. Maybe give it up a little).

It’s a love story and it isn’t, framed by death and absurdity and some dude who definitely should’ve died of lung cancer years ago.

Mulder and Scully felt inevitable only because it was clear there was no one else for either of them, but they also always had a question mark, because we never knew if that fact was too much. How do you navigate a romantic relationship based on there being no other person for you? It’s pretty bleak, and it took me a long time to stop barking at them to kiss and understand why they didn’t do it as often as I wanted them to.

Given the 25th anniversary, you’d think I’d delve into a top 25 of some kind – top 25 times Mulder and Scully should have kissed but didn’t, top 25 times Scully should’ve just left Mulder to die somewhere weird and dark. But honestly, the episodes I love and the moments in them are all so similar and beget such a pattern that the top 25 of anything is likely all the same 25 things. But! If The X-Files has a top anything, it’s an episode midway through the series that really nails what makes the show so watchable.

The X-Files knew how to be serious and dark; it knew how to coax you into a deep sense of despair. But it also knew how to make fun of itself and the dynamics of its episodes. I’m talking, of course, about ‘Bad Blood’ – the episode where Mulder and Scully tell their side of a specific monster-of-the-week story, and it’s the one episode (among many) that play up their relationship, and their believer/ sceptic dynamic.

If you never experienced season five’s ‘Bad Blood’, please email me immediately and I’ll give you an itemised list of reasons why you should. I’ll also give you a selection of episodes you can watch to acquaint yourself with the show enough that you can then watch ‘Bad Blood’ afterwards. One of The X-Files’ taglines is ‘Trust No One’ which is honestly sound advice, except in this case where you 100% definitely should. Trust me, it’s life-changing.

It’s easy to talk about the good moments of the show in hindsight, and harder to remember the bad. I want to say something scathing about how Chris Carter didn’t seem to be able to afford a lighting department, or how every child he cast on the show was a supreme hellcreep. But truthfully, The X-Files is hallowed to me. With this many years behind us, my anger at injustices like not being able to see what’s happening half the time has softened to tenderness. Who cares about seeing anything, it’s my spooky show about two FBI agents who love aliens and each other!

There’s also a loneliness to The X-Files that resonates even now; it’s insular and uninviting to those who’ve never seen it and it’s hard to find a way to explain why anyone should watch it in 2018. It’s not sexy; it’s showing its age; the external hard drives they talk about can only hold 10GB and they think that’s impressive. But on its 25th birthday, I can remember all the moments that sit tucked right around my heart and remind me why there’s no show before or after that will be quite the same.