As Food in A Minute celebrates its 25th birthday, host Allyson Gofton talks to Tara Ward about the classic ‘90s TV spots that took home cooking to a new dimension.

Back in the glory days of the 1990s, a single minute of television caused the entire country to spiral into a food frenzy. The culprit was a Food in a Minute recipe for Tuscan lamb shanks, a meaty treat that inspired so many New Zealanders to get into the kitchen that butchers nationwide ran out of product. Nobody had warned them ahead of time, and they were fuming. “They hadn’t killed enough sheep that week to cope with the demand,” Food in a Minute host Allyson Gofton recalled from her Cambridge home. In 60 seconds, Food in a Minute had run the nation’s shank supply dry.

It’s moments like this that capture New Zealand’s obsession with Food in a Minute, the charming series of television ads that changed the way we ate and cooked. Gofton was the host from its humble beginnings in 1996, beaming into our homes every night for 13 years with her easy, inspirational recipes that anyone could make 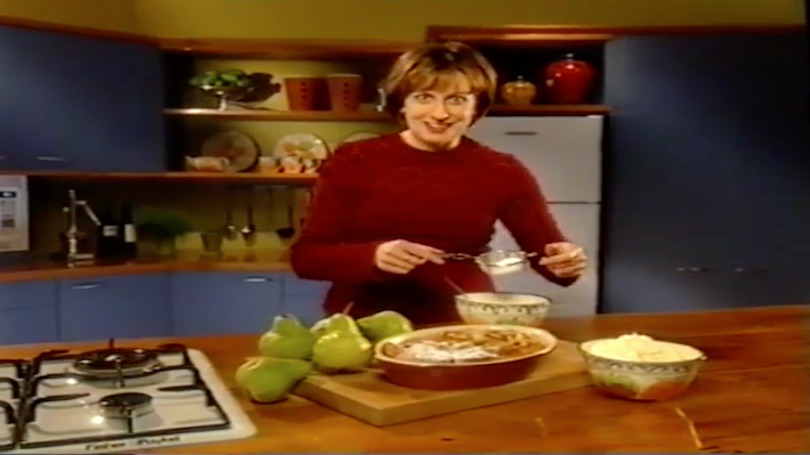 Food in a Minute was born out of a local study in the 90s that revealed that 80% of home cooks had no idea, by 4pm, what they would be cooking at dinner time. Gofton’s advertising colleague Mike O’Sullivan had a simple idea: one minute of food, on television. Gofton had worked as a chef, food writer and CEO of the New Zealand Nutritional Foundation, and together with O’Sullivan, knew exactly what that minute needed to contain. “It had to be appointment viewing. It had to solve a meal solution. It had to fit into a budget, be easy to do, and a twist on a favourite.”

Food producer Wattie’s liked the idea, and agreed to fund it for six months. “The big thing was Wattie’s having the vision to see that if we showed you how to make a meal using a product, as opposed to doing an ad for the product, people would make that and use the product,” says Gofton. “So they took this really big leap of faith by sponsoring it.” Gofton, lamb and Wattie’s: the holy trinity of Food in a Minute (Photo: Supplied)

Food in a Minute was aimed at busy New Zealanders who loved a shortcut in the kitchen, and didn’t mind jazzing up an old favourite with a new Wattie’s sauce or frozen chargrilled chicken steak. It was Gofton’s job to bring the viewers and the product together in a slick 60-second package, making her our first food influencer, years before the term even existed. Food in a Minute ads were short and snappy pieces of entertainment delivered by a memorable personality, much like you’d see on Youtube,  TikTok or Instagram Reels today. If we could have liked and subscribed in 1996, we would have.

It was a very new way of marketing food, and while viewers embraced it, Gofton copped criticism for her partnership with Wattie’s. “I took a lot of flak from some of my colleagues about working with a company that, you know, we promoted baked beans,” she says. “A lot of my colleagues would not put their name with a brand, would not take an endorsement, whatever you want to call it. You all had to be independent. I wanted to be someone who encouraged people to cook at home and to have joy in preparing that food, but have the knowledge to do that within the home environment.”

While Gofton was the face of Food in a Minute, the star was the food itself. Viewers never knew what meal Gofton would cook each night until the ad appeared, and there were some doozies: baked bean and bacon muffins, a chilli con carne tart, a dessert based on a Complan smoothie. The early ads saw plenty of mince and iceberg lettuce but, by 2004, Gofton was busting out smoked chicken and cream cheese filo parcels, or a snazzy tuna, spinach and lemon pilaf.

Our tastes were evolving at the turn of the millennium. We had more choices in the supermarket, and Food in a Minute was in the eye of the changing culinary storm. “Food was different back in the ‘90s, we had to work with what was out there. I mean, there was a debate as to whether we put olives in things, because it was like, ‘oh that could be a bit too much’,” Gofton says. “Honestly, the first time I wrote for Next magazine, I did a story on ‘what is pesto?’ We didn’t even have basil, you didn’t have fresh herbs, you had to grow it yourself.”

Gofton admits to some Food in a Minute failures (“we made strawberry jelly and we made it with bloody strawberries and gelatin. Can you believe that? Why didn’t we buy strawberry jelly?”) but the successes were huge. As with the Tuscan Lamb Shanks, the whole country went wild when they found a recipe that they liked. The Pom Pom Cottage Pie was an instant hit, and the recipe that Gofton reckons cemented Food in a Minute’s success.

“It took a lot of effort to convince the product manager to let me put pom poms on top of the cottage pie,” Gofton says. “When we did, they had to bring the product in from Germany. They flew it in from overseas because they could not meet demand. It went berserk.” The show began to share schedules with supermarkets to avoid products selling out. Gofton says this popularity proves that people were time-poor and in need of easy recipes – a need which has only grown since Food In a Minute began.

As the recipes evolved and the sets grew flashier, Gofton remained a warm and friendly constant, an old friend who popped in each night before the six o’clock news to motivate us with an evening meal. The home cook was at the heart of Food in a Minute, and Gofton never forgot it, even creating an imaginary viewer named Mrs Hastings to keep the production team focused. “Oh, I loved Mrs Hastings. We had a photo of her hanging off the camera for the day,” she says. “She was Food in a Minute. We’d have a different picture all the time, and I’d look at it and think, ‘now that’s who I’m cooking for. I’m cooking for them’.” 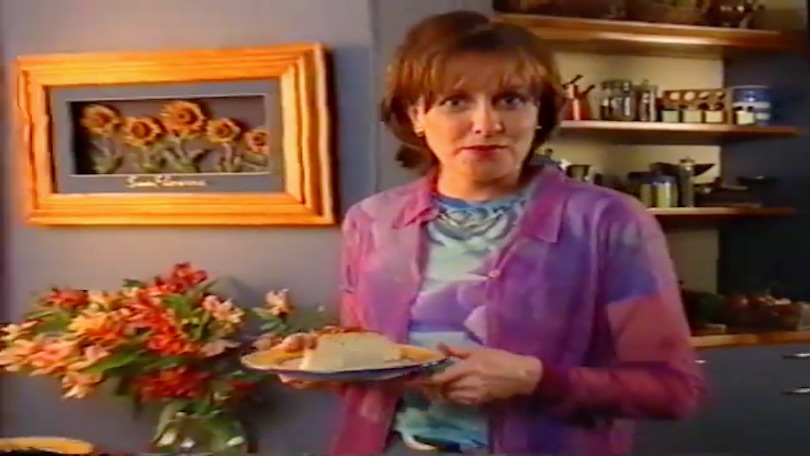 In the early days, Gofton made Food in a Minute while working full-time, organising and filming each six-weekly block of ads at nights and on weekends. “Initially I wrote the script, I came up with all the recipes. We filmed in a bond store, which was underneath a building with no lights at the back end of Parnell. We’d come gasping out to air at the end of every day,” she says. “And on a Saturday, I would go back in and re-cook everything with the photographer and send it in to be made into leaflets or the magazine, or wherever it was going.”

Food in a Minute’s primetime evening slot on both TV1 and TV2 meant Gofton beamed into over 750,000 homes every night, seven days a week. Before long, there was an 0900 number viewers could call to request recipes, a monthly Next magazine column and recipe leaflets displayed in supermarkets. Gofton wrote seven best-selling Food in a Minute cookbooks and Wattie’s paid her to travel the country, giving cooking demonstrations in country halls and shearing sheds to locals who would bring their Food in a Minute leaflets along with them.

“I don’t think I actually realised how successful it was,” Gofton says. “I remember when the first book came out and the print run went to 100,000, which was pretty unheard of. I didn’t quite realise how significant that was. I always saw myself as working with a team, so it wasn’t just my success, it was Wattie’s, it was Mike, it was Tiger Films, it was the director.”

“I didn’t see myself as a superstar, I just saw myself as the Food in a Minute girl. And I was happy with that, because I really loved the people.” Gofton hung up her Food in a Minute apron in 2009 after deciding it was “time to go” and Food in a Minute moved into a different era with new presenter Lana Garland. The Food in a Minute website remains popular and the fast, easy recipes endure, but it was the connection between people and food that Gofton loved the most. Her affection for Food in a Minute shines through, as does her fondness for the people she worked with and the New Zealanders she met because of it.

“I feel very privileged to be part of that New Zealand culture and setting that up, you know, making it something that a whole generation remembers,” she says. “Because in cooking your pom poms on top of the cottage pie, the family eat it and love it and there’s joy and you’re nourished. It’s a good time. Sometimes we try to make it too flash these days, but actually, at the end of the day, it’s about laughter at a dinner table, family, and learning and loving, really.”