The Australian comedy character has been a mainstay of New Zealand screens and stages for more than a decade – but who is the man under the mo’? Alex Casey meets him.

We haven’t even started the interview and he’s already said he will throw my phone in a nearby cup of water if things go south. While this might seem like unsurprising behaviour from Chopper, it’s not the brutish Australian comedy character who is making the threat. It’s coming from Heath Franklin, the polite, self-conscious suburban dad who seems deeply worried about saying anything wrong. On arrival he has already apologised to me twice – once for talking to someone at the door for 30 seconds and then again for only ordering a glass of water.

“I think a lot of people assume that I’m a sweary loud bogan dude who puts sunglasses on and then he’s Chopper. People seem to be surprised that it’s a bit more transformative than that.” Indeed, sitting across from him at a booth in Auckland’s Federal Deli, it is very easy to forget that Heath Franklin has been moonlighting as a yelling, tattooed career criminal for the last 15 years across stand-up stages, panel shows and YouTube videos. Chopper puffs out his chest and tells people to “harden the fuck up”. Heath Franklin wears a T-shirt that says “nice day to be alive”.

The character, based on notorious Australian criminal Mark ‘Chopper’ Read, was never part of Franklin’s plan. In fact, he says the whole thing was an accident. He was at university when the film Chopper (2000) was released, and was inspired by Eric Bana’s savage and strange interpretation. “I didn’t know anything about Chopper but the movie was incredibly well-directed and he [Bana] was a great combination of being super bleak but quite funny,” he says. “I thought to myself, ‘If you got rid of all the violent, scary bits, there’s something in there.’” He didn’t elaborate on which violent or scary bits he means in particular, but it’s safe to say Franklin’s Chopper doesn’t force his fellow 7 Days panelists to chew on razor blades, cut off their toes will bolt cutters, or feed them into a cement mixer – all things that the real Chopper has bragged about doing. Instead, the violence manifests through obscenities, yelled at the likes of Zumba, Jetstar or Nickelback. The Chopper character first debuted in a university revue, before a friend convinced him to take it to a local theatre, and then on to the Melbourne comedy festival.

Somewhere, at some point, someone in the audience who worked in television saw what Franklin was doing, and liked it. “I think my friend – who is now my manager – did a lot of hard work to get that to happen. I didn’t really notice any of it, I was sort of just Mr Magoo-ing my way through life.” Suddenly, at least as Franklin retells it, Chopper went from being a weird thing he did with a pipe cleaner moustache in front of small comedy club audiences, to something he was doing on a television set surrounded by cameras on The Ronnie Johns Half Hour.

“That’s when I realised, ‘Oh shit, I’m probably going to be on TV and the real Chopper probably has a TV.'” It wasn’t until a few years later that he would come face to face with his namesake at a Zoo magazine photoshoot. “I remember he was super standoffish and extremely keen to assert himself as the alpha. It was like, ‘Dude, of course you’re the alpha. You’re Chopper and I’m a dumb guy playing dress-ups.’”

The real Chopper, who once bragged about killing anywhere from “four to seven” people, didn’t give a lot away. “He was really monosyllabic,” Franklin recalls, slipping into an impression for the first and only time during our interview “‘What have you been up to? ‘Not much.’ ‘What about before that?’ ‘Prison.’ ‘Great, well that’s us caught up.’ It was one of those things where, if you meet the guy you are pretending to be, you’d think you get a good story out of it. I got fucking nothing.”

He may not have got good chat from Chopper, but Franklin freely admits the character has gifted him not only a sustainable comedy career, but a layer of confidence and a point of difference. “You can do something as Chopper and if people don’t like it, it’s Chopper they don’t like, it’s not me.” 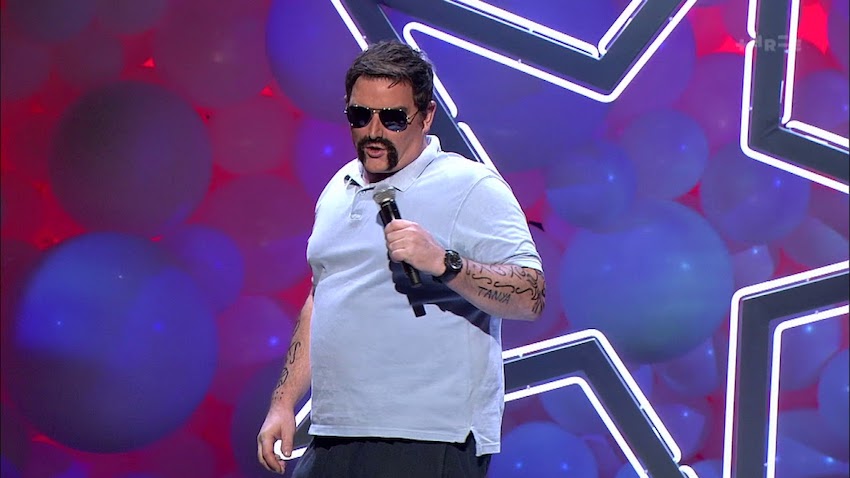 He’s also aware that the character sets him apart from the countless other middle-aged, middle-class white men in stand-up, plainly stating that he and fellow 7 Days regulars Ben Hurley, Dai Henwood and Paul Ego are relatively similar people. “A lot of people ask me why I don’t perform as myself more often and I just say, ‘I could, but that’s just what everyone else is doing.’ It feels like I’d be joining the end of a very long queue.”

Why join the end of the queue when you can run a giant solo national tour across New Zealand with nothing but a backpack full of polo shorts, moustaches and aviators? Because although he says he does “OK” at home in Australia, Franklin’s Chopper is hugely popular here in New Zealand. “It wouldn’t surprise me if it’s because there’s less of that comparison to the real Chopper,” he says. “I get to bring all the good bits with me and leave all the shit bits behind, which is good because the more I looked into the real Chopper, the more depressed I got.”

There’s one city in New Zealand that likes Chopper a lot. After gigs in Christchurch, Franklin will often be invited back to someone’s house to hang out. “It’s the weirdest thing to imagine someone being like, ‘Chopper is coming round,’ and then Heath Franklin shows up, and everyone being like, ‘That guy sucks’,” he laughs. It’s not often he gets recognised out of costume, and he’s used to walking through foyers after a gig and having people talk to him about the show. “I often trash myself: ‘That Chopper guy sucks, he’s a horrible person.’”

Despite being hugely self-deprecating, Franklin takes comedy very seriously. He writes three hours and throws out two. He makes a point of not watching a lot of professional stand-up because he doesn’t want to become a “toned down Ricky Gervais” or a “supermarket Sarah Silverman”, preferring to slip into open mic night audiences. “I find it much more interesting to see people who don’t know what they are doing and just being themselves.” Surprisingly, he says watching drama is actually more useful for comedy. “When it comes to actually writing, I think you are better off watching The Handmaid’s Tale than Rick and Morty.”

Along with The Handmaid’s Tale recommendation, it could be a revelation to some that Franklin considers himself a “massive lefty”. Over the course of our conversation he slams Scott Morrison, Rupert Murdoch and Donald Trump repeatedly, and says that he sees Chopper as his Trojan horse for slipping “left wing ideals” in front of audiences who might not otherwise listen. “It’s funny, I’m pretending to be this super right wing guy but I talk about things like the gender pay gap and trans issues. You realise when you are in regional Australia or regional New Zealand, talking about these issues, that maybe you’ve got a rare platform.”

Chopper may have rebranded as a vigilante woke warrior now, but Franklin says he’s made a lot of mistakes and regrets a lot of his early stand-up – much of it perhaps drawn too closely from the source material. “When I first started, I believed I didn’t have a responsibility to tell people what to think, but then I’d talk to people after a show and realised they missed the point entirely.” Does it concern him that many of his fans still champion him as an anti-PC icon? “It’s weird because I consider myself super-PC but I guess, if I’ve done my job successfully, people don’t notice it.”

Fifteen years in, Franklin insists he doesn’t feel trapped beneath the Sharpie tattoos and the fake moustache – but he does feel a pang of envy around his comedy peers. “I am jealous of people who can rock up to a comedy club and walk straight on stage with what they are wearing, whereas I’ve got a big stupid backpack full of garbage that I’ve got to change into somewhere.” Still, he has no plans to retire the character anytime soon, and has branched out to YouTube over the last year as a way of keeping Chopper alive through the pandemic.

“I’m actually pretty content. I don’t want to take over the world or anything, I’m very happy just doing this. I’m happy to be Chopper, happy to be me, happy to be…” he trails off and looks at his watch. There’s a car coming to pick him up and take him to the 7 Days set shortly. Of course, he will be appearing as Chopper, not Heath Franklin. He apologises for having to cut the interview short even though we had spoken for over an hour, and then apologises again for only ordering water, before saying goodbye and setting off to his nearby hotel to grab his costume for the night.

Minutes later, my Uber drives past as Franklin emerges from the hotel foyer. Nobody looks twice at the unassuming 40-something guy, coyly smiling while pulling on his big, stupid backpack full of garbage.