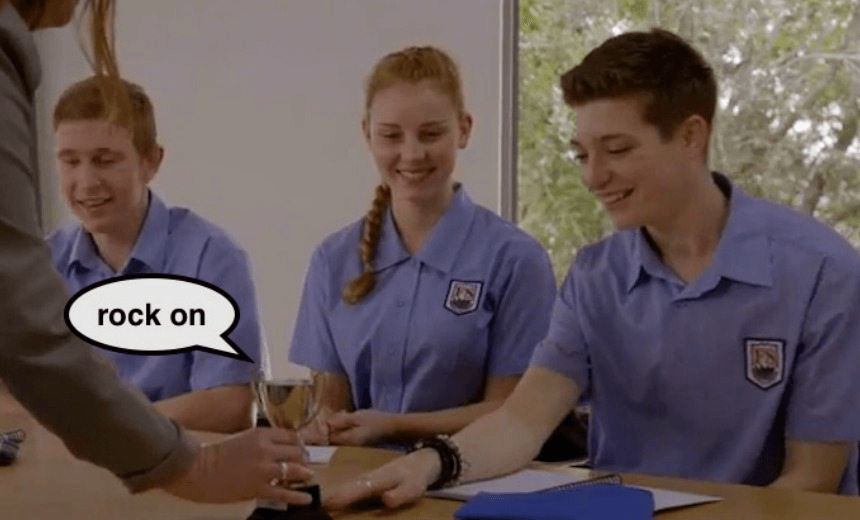 Tara Ward brings you her rankings for Shortland Street last week, including Dom’s arson, black mould from hell and a haunted dolly.

1) Blue rocks his way around Ferndale

“Change yourself, change the world. Rock on, people.” Holy Moses, this powerful life-affirming message had such insight and clarity that it could have come from Gandhi, Mandela or Angela Stone. Forget those clowns, for this pearl of wisdom sprang forth from the lips of Ferndale’s Supreme Debater of the World, our Blue.

Riding a tsunami of linguistic fame and adulation, Blue won Ferndale’s saddest trophy, pashed Lottie, stood up to pyromaniac school bullies and bought down a teenage criminal upstart. Forget the midget-sized trophy, a cracking week like that deserves a veritable cauldron on a plinth. And a shiny crown. Rock on, Blue.

2) Dolly toys with our sanity

Every relationship has peaks and troughs, and together we’ve shared some dark days: Lucy’s soap business, Victoria’s unresolved death, that time TK put a box on his head and pretended to be a robot. But this Dolly storyline has hit lows so subterranean that I’m not even sure TK’s magic silver helmet can save us.

I love you, Shortland Street, but hear this: NO MORE DOLLY. This toy from hell is supposedly possessed by ghost Melissa, and haunted Bella and Boyd by whining “I love you” and “you are my friend” and “this storyline makes me want to put pins in my eyes, and not in a good way.”

Dolly the Dolly is officially third on my list of ‘Preferred Shortland Street Storylines Involving Someone called Dolly’. (First is Dolly the Cloned Sheep, followed closely by Dolly the Parton, thanks for asking). Give me a heart-warming narrative about a genetically modified farm animal over this haunted toy shitstorm, anytime.

3) This black mould is the answer for everything

Science has an explanation for everything, like why drivers fail to indicate at roundabouts (they’re idiots) and why Leanne felt like she was being strangled by a ghost. Chillax, Lazza, it was just some poisonous black mould that caused an anaphylactic reaction. Nothing to see here, move along.

Curtis claimed there was an evil face lurking amongst the toxins of death. Scoff you may, but I suggest you take a closer look. The truth is disturbing.

Bloody Lionel Skeggins, I knew you’d be back one day.

TFW you realise your arm is on fire. Dom’s totally fine, whereas this horrifying image is burned into my retinas forever.

5) Cam bakes a cake and cries tiers of 100% saccharine

This culinary masterpiece looks delicious enough to overlook the fact it was baked by a man who was baked. Drugs are bad, kids, although they do give you magical bursts of creative genius that produce a delectable array of cakes and pastries.

Alas, Cam’s tasty treats and edible hospital food failed to win back Kylie’s cold, blonde heart. She dropped him like a sack of organic Jersey Bennies, while Nicole bossed him around like he was some unreliable, drug-dependent flake. Women! You make them cake and they still wang on about honesty and respect, ffs.

Should Cam stay? Should he go? Who cares. Just leave the cake behind.

We are all Boyd, wondering what the hell happened to our hopes and dreams. Answer: they’re lying in tatters at the bottom of TK’s wheelie bin, next to an annoying ginger doll shouting satanical messages – which is right where this shithouse storyline belongs.

7) Even the sous chef is possessed by Melissa