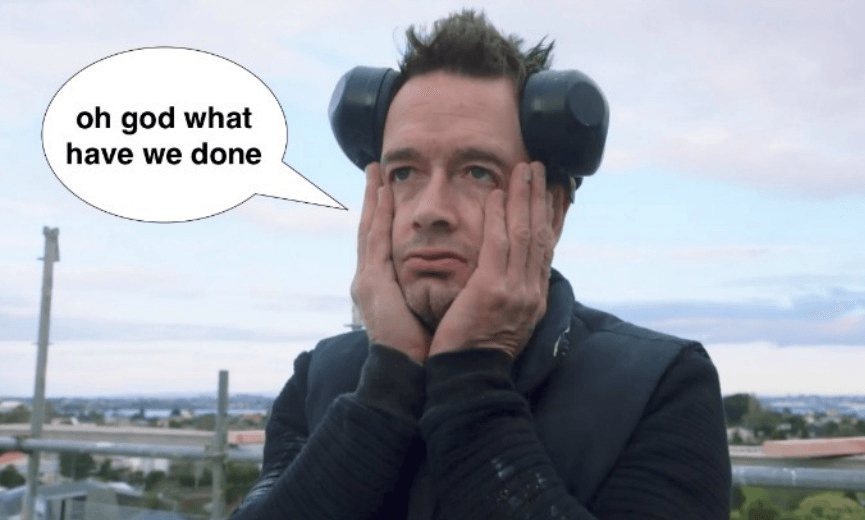 Jane Yee on The Block: It’s the eleventh hour and we are all Andy

Jane Yee tackles the eleventh week on The Block NZ, including giant eclairs, pergolas and a Jason Gunn cameo for the ages.

A pergola. Four and a half hours of my life this week revolved around an effing pergola.

“The fact that you’ve moved it puts it under the recession plane, and I can’t see any reason that it shouldn’t stay there.” This is how Peter Wolfkamp informed the HamDads their beloved structure had been given the green light.

What he should’ve said is “that monstrosity is really fugly, the judges and all other humans are ten thousand percent going to hate it and you’d be mad to leave it up.”

Every year I commit to watching The Block NZ. Every year it gets to the tail end of the season and I start questioning all my life choices that have led to this moment. Why am I not learning to scuba dive? Travelling the world? Writing a novel? Why is my Sunday night being spent in front of the TV, waiting through actual commercial breaks to find out the fate of a pergola? Cancel my memoirs!

Getting to this point in the season has been hard slog for everyone involved: the contestants, the tradies, you and me. Let’s not forget the poor Mediaworks intern who mentally checked out ages ago and for this week’s challenges just ripped a leaf out of the 48 Hour Film Competition handbook before drawing a circle around the latest Coffee News brain teaser.

Helping to lift the mood a little this week, family and friends visited with hugs, kisses and words of encouragement for their beloved Blockies.

When Mum comes to wipe down the benches, pick up undies from the bedroom floor and give the bathroom a good going over you know the end of The Block is nigh. Just thinking about getting my Sunday-through-Wednesday nights back has me as high as a reddy-brown pergola on a roof terrace in Northcote.

I have no issues leaving The Ings at the top of the power rankings from here until the bitter end. Look, I realise their rooftop terrace was lacklustre and they don’t seem to know the difference between a musical short film and a music video, but none of that will make a blind bit of difference come auction day.

I’ve said it before, and I’ll say it again (next week probably), the brothers have the best house. Their closest competition is House Four but The Besties have well and truly cocked up the layout there, and that works bloody nicely for Ling and Zing.

The Christchurch cruisers might have underwhelmed the judges in both Room Reveals this week, but they impressed me with their quality NZ Post promo. Honestly, it fit so seamlessly into the narrative arc of the show that had I barely noticed it was sponsored content.

When Julia and Ali look back on their time on The Block, week eleven will be like a fifty dollar note poking out of a pile of dog poo. It was a great week for the twins; everyone was too scared to be mean to them, they managed to swap some outdoor furniture for a paint job from Nate, and they had the opportunity to prove to the nation they have friends IRL.

On top of all this, the twins took out both the short film and brainteaser challenges and then rounded up the winning streak with the top score at Room Reveal. If only their terrace view wasn’t interrupted by the blight on House Two’s rooftop, they might have had a fighting chance for the top spot in this week’s rankings.

This week, the Besties accepted no responsibility for a paint spill that was clearly their doing, did a half arsed Dinner Wars paint job for Ling and Zing, and produced a sci-fi short film that had primary school AV monitors nationwide shaking their heads in disbelief. You would think after three months of fake smiling on camera they would have this acting thing down, but alas…

Things looked up for Steak and Cheese when the judges gave them decent scores during Room Reveal, but The Twins threw down a minus-two to turn what would’ve been a draw into a win.

The Besties have spent the last eleven weeks bobbing around the middle of the scoreboard at Room Reveals, in challenges and in these very influential power rankings. With only one week left on The Block, it’ll take more than a couple of strategically placed romantic polaroids to lift the spirits of the Palmy pair.

Things started well for Andy and Nate. As the only contestant qualified to operate a paint sprayer, Nate became the most popular guy in Northcote. Once again, the HamDads impressed Bernie and Jason, taking out the midweek Room Reveal with their Entrance, Stairwell and Powder Room. Things ramped up to awesome when the wives and mums showed up with some elbow grease and a banana box of ginormous choccie eclairs.

All was going great for the HamDads, Andy even got a little frisky suggesting a christening of the double shower with wife Caroline.

Then it all came crashing down at room reveal when Jason and Bernie tripped over the thousand outdoor features piled up on House Two’s terrace before coming face to face with Nana’s carport. Lovely lighting, pretty planting and a boss barbeque couldn’t hide the eyesore in the room and couldn’t stop the judges raining ridicule on the HamDad’s pergola parade.

That pergola would never have happened under Brent the Builder from House Three’s watch. I mean, we all thought the HamDads’ pergola was a very, very bad idea indeed, but Brent was the only builder prepared to go on national telly and say it. Nay, score it.

If Peter Wolfkamp keeps up this embarrassing dad act for a few more years, he’ll be leader of the National Party in no time.

He’s reached lofty heights as host of smash hit shows like Dancing with The Stars, The Rich List and Wheel of Fortune, but he’s still humble enough to don a More FM tee shirt and guest judge The Block NZ’s worst challenge yet. Jason Gunn: national hero, man of the people, sacrificial lamb.