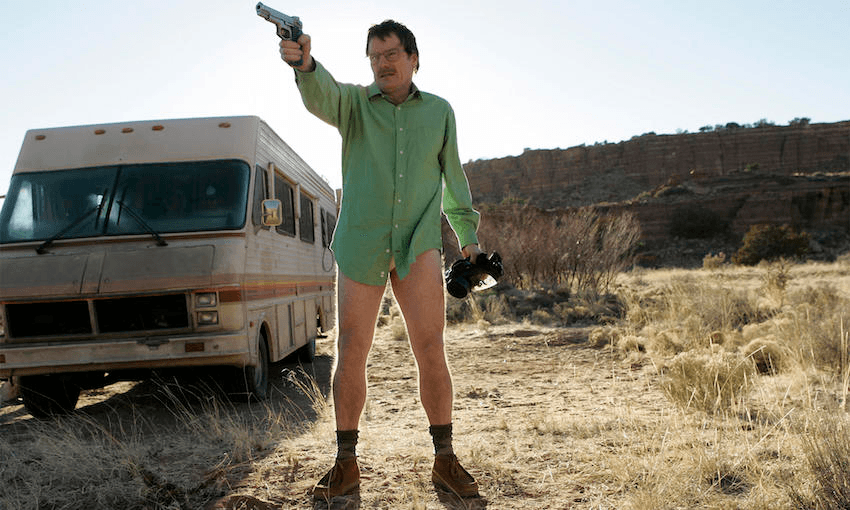 Breaking Bad was a phenomenon – but not even it can live up to what it was.

There will never be another Breaking Bad

Breaking Bad was a phenomenon – but not even it can live up to what it was.

Ahead of the release of El Camino: A Breaking Bad Movie, Uther Dean writes on how there will never really be another phenomenon like the original Breaking Bad.

Have you tried rewatching Breaking Bad recently? It’s not the same, is it?

Something has changed. When it was wrapping its original run, half a dozen years ago, it was on fire, it felt like the whole world was watching this bright burning magnesium flare of a show. The stressed final flails of Bryan Cranston’s desperate and morally absent Walter White captured the zeitgeist in a way that has rarely been seen since.

Obviously, time passing would take some bloom off the rose, but this is something more than that. As much as watching The Sopranos, M*A*S*H or the first season of Desperate Housewives outside of their original hype-bubbles is a changed experience, the original spark and quality is still clear and present. Not so with Breaking Bad. To rewatch Breaking Bad is to feel like you’re remembering it wrong, that it wasn’t as brilliant as you thought at the time.

To be clear: I think Breaking Bad is a good show.

It’s well-made, rigourously crafted, with performances and writing that are consistently strong with moments of the soaringly sublime. A burning, crackling descent into madness, Breaking Bad took the defining narrative of prestige television (the bad man spirals until he defeats himself, as codified by The Sopranos) to its logical endpoint. That a show with that story hasn’t since broken even nearly as big as Breaking Bad reveals the gravity with which it affecting the landscape of television — with Better Call Saul’s (a prequel to Breaking Bad) stubborn refusal to break out into a hit despite being every bit as polished and interesting as Breaking Bad serving as the defining example.

While its saturated look may have aged a little poorly, that’s more to do with the fact that it became the template for the half of TV that doesn’t look like a David Fincher film (thanks House of Cards), than an actual issue with the show itself. You’re always gonna look worse off in retrospect when a thousand other shows have glommed on to your way of doing things and perfected them beyond the means available to you at the time.

Breaking Bad isn’t a perfect show by any means of the imagination. If Game of Thrones hadn’t made a last minute dash for the crown, it would easily be the decade’s biggest example of a show not quite putting in the work to train its audience to watch it in the right way, and that coming back to bite them in the ass. There is a streak of misogyny that runs through how it writes and presents women. And, of course, you have to be very generous with your assumption of intended irony when it comes to its portrayals of non-white people.

But none of those are the reason why it no longer really sparkles.

It’s only been six years, but a lot has changed in how we watch television. While the shift from “appointment viewing, water-cooler television” to “binge-able prestige dramas to be decoded en masse online,” at first blush seems simply to be a transition in dosage and little else. What does it matter to the show you’re watching if you watch it one episode a week, with months if not years between seasons, or ten episodes a day over a week?

Because it turns out that one of the major narrative engines of Breaking Bad is the cliffhanger. This seems like an obvious statement, because it is. Vince Gilligan (Breaking Bad’s showrunner) is a modern master of hitting the audience with a sudden and mind-blowing question. And more often than not that question was just ‘What the fuck is going to happen now?’ Then simply being happy to let that question torment the audience for the time between episodes.

When, spoilers for the rest of this paragraph by the way, Hank works out that Walter White, his brother-in-law, is the same drug kingpin he’s been chasing for four seasons at the end of the first half of the final season, the audience was forced to spend nearly a year fretting over what would happen next. Over that year, I took to almost involuntarily whispering “Hank knows” to my then-partner. It was weaponised memetics with the innate gaps built into broadcast television as a key ingredient.

Breaking Bad drove its narrative by asking the audience questions that they couldn’t have any bead on how they’d be answered. The anticipation of the time between episodes gives the audience fetile soil to build theories and possibilities, with almost every option seeming possible. So that future story beats were less singular moments of plot than they were wave functions collapsing universes of possibility. It was incredibly thrilling. The only show we’ve seen to fully act in this way since is Twin Peaks: The Return and even there it wasn’t the core mechanic of the show as it was in Breaking Bad.

While, of course, there have been other shows since that trade in cliffhangers as a key part of their form. Game of Thrones, Westworld, Mr. Robot and Succession come to mind. However, all three of them lack the unpredictability that made Breaking Bad’s enforced audience speculation so effective and pervasive. Breaking Bad rode its charm and style to regularly pull the rug out from audiences and then offered solutions with little to no set-up. It really felt like anything could happen. Where as the modern bastions of the cliff-hanger as listed earlier this paragraph, are all designed, in the wake of Lost, as puzzle boxes, to be decoded in the knowledge that you’ve been given more clues than you think. You learn the method and so the speculation narrows and becomes, in my opinion, less fun and less vital.

When Game of Thrones spent so much time saying that it will shock you, you quickly realise that it is going to get out of its cliff-hangers and arcs in the most shocking way possible. Westworld’s obsessive laying out of clues and meticulous expression of the core questions of the show makes speculating about its plot between episodes more a case of algebra than imagination.

Now that all of Breaking Bad’s wave forms have collapsed, now that it is a set thing rather than a network of possibilities reaching out of unpredictable characters, it has lost a key part of how it works. Like watching a film recording of a stage-play or hearing someone recount a improv scene they were in, you can’t go back to Breaking Bad.

Without gaps between episodes, the dramatic emphasis in Breaking Bad often feels wrong and ham-fisted. Moments seem too big or too small, making the pace feel feverish or leaden—sometimes in the same episode. That’s why it’s not the same to watch it now. That’s why you couldn’t make Breaking Bad now.

So why are they? Better Call Saul’s success lies in very pointedly not being Breaking Bad. Why go back to the well (with El Camino the Netflix sequel film which premieres tonight) that you’ve proved you don’t need to drink from anymore? Who knows?

The people making El Camino are smart. I mean, they’re the people who made Breaking Bad. Saving annoucing it until they were finished filming, as well as keeping tightly locked down on spoilers, even the movie format, all speak to a creative and production team thinking about how you create the conditions to successfully reshape Breaking Bad into something that works in 2019. I’m still a little skeptical, but I trust that they’re gonna try their best.

But the best sign for me is that, tonight, when I sit down to watch El Camino the biggest question in my mind won’t actually be ‘How are they gonna pull this off?’ It’s gonna be ‘What the fuck is going to happen now?’

You can watch El Camino: A Breaking Bad Movie on Netflix right now.