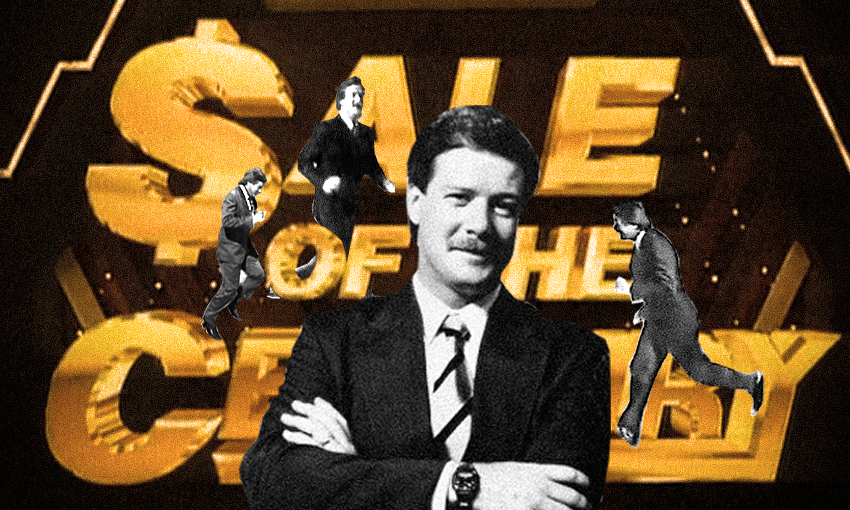 The nineties gameshow Sale of the Century may be all but forgotten, but host Steve Parr’s trademark stage-left entrance will live on forever.

Sale of the Century was the most glamorous game show ever made in New Zealand. It burst onto our screens back in 1989, when broadcaster and former What Now presenter Steve “Star of the Show” Parr and newcomer Jude Dobson beamed into our homes at seven o’clock every weeknight on TV1. SOTC moved to TV3 in 1994 (with Julie White replacing Dobson), but it remained a show where lives could change in the push of a buzzer. It was The Chase of its day, the prime time quiz show that everybody watched and everybody wanted to win.

SOTC was the only place you could buy a new $37,000 Mitsubishi Galant for $750, or an $800 microwave for nine bucks. Every night, three contestants earned money by correctly answering Parr’s trivia questions, while Dobson tempted them with outrageously discounted Gift Shop prizes. The player with the most money won, while the losers were sent home with a Michael Hill Jeweller solid gold money clip to hold all the cash they didn’t get.

The best round was the Fame Game Board, where players chose a prize from a panel of famous faces. Photos of celebrities like Judy Bailey, Anita McNaught or Alison Holst stared into our souls, as well as one lucky home viewer, usually a gap-toothed kid from an exotic town like Palmerston North or Blenheim. As a child, I would dream of the fame that being SOTC Home Viewer would bring. What if they turned your face over to reveal you were hiding the massive $25 bonus prize? Life would never be the same again.

In the show’s final minutes, Parr would shout “LET’S GO SHOPPING!” and lead the winner on a magical journey through a world of ridiculous prizes. Glamorous models zipped up leather luggage sets and arranged fancy dinner plates like the perfect humans they were, living the life we all deserved.  We didn’t want much in the 90s, just a flashy garden mulcher, an electric piano and a Swiss-made gold watch with a quality Quartz movement. SOTC was all our aspirational dreams come true.

But the start of SOTC is more important than the end, thanks to the Steve Parr Slide. For over five years, Parr began every episode with a snazzy slither into the stage, and the man gave us range. What would Parr do this time? An excited purse of the lips, a jazzy twist of a shoulder, or a sneaky run-skip-shuffle? The world was his slidey oyster. There’s even a band named after the Steve Parr Slide, which is more than Bradley Walsh ever got out of The Chase.

Steve Parr’s slides must never be forgotten, so we’ve captured them in a metaphorical gold money clip of immortality. In the words of Jude Dobson, “hokie kokie, let’s get going”.

The grainy annals of time reveal the shocking truth: there was no Steve Parr Slide in SOTC’s inaugural episode. Parr saunters onto the set with a half-hearted jog, displaying a lack of urgency and heavy-footedness that suggests his soles were covered in velcro dots. I’m not angry, Steve, just disappointed.

9) I stumble but I do not fall

It’s 1990, and Parr begins with some bouncy skips and pumping arms, before shifting to sprint mode. It’s too much, too soon. This is a high energy, high risk situation, and it’s no surprise when Parr makes a near-fatal stumble.

Perhaps there’s something sticky on the floor, some fat from the Weber barbeque in the Gift Shop, or maybe Jude Dobson was so pissed off at playing second fiddle that she sprayed Coke all over the stage in the dead of night. We’ll never know the truth, but the damage was done. “You almost put me off!” a terrified Parr tells the screaming audience. Jude admits nothing.

8) Goodnight, but not goodbye

This was Steve’s final slide for TVNZ in 1993, and the emotion goes to his head and hips. “Last time I’ll do that for a while,” he says, post-slide. Think again, sweet prince.

Come for the standard skip-and-run, stay for the podium body roll.

1995 was a stellar vintage of Steve Parr Slide. Here, Parr floats as if on air, displaying a pizzazz usually only seen while windsurfing or using the latest Canon automatic word processor. There’s also a wrist flick here that takes your breath away, as if Steve’s putting his forefinger and thumb together to make O for awesome.

Parr begins his slide as soon as he reaches the Fame Game Board, which is approximately 300 metres away from the podium. It’s hectic as hell, but Steve doesn’t give a shit. He’s basking in the hot Tuesday night glow of the mid 90s, and this slide is his bitch. He’s got this like he’s a bed that looks like a motorbike but is actually just a bed, usually $508 but tonight only $6.

Ranks highly thanks to the classic 90s “shooooom” noise Parr makes as he hits his mark. $hooooom of the Century, if you ask me.

2) I just want to be part of your symphony, Steve Parr

This 1991 slide is peak Parr. It begins with a bouncy skip and jaunty side step, before Parr pounds it out to reach the podium in record time. The slide is elegant and controlled, his smile never wavers, and his suit matches both his hair and moustache. The whole movement is as smooth as a fine pair of Italian leather handbags, and as tasteful as $150 worth of Columbine hosiery. Bravo, Steve Parr. Bravo.

It was the best of times, it was the worst of times. Who cares if this is real or not, because it’s nine seconds of perfect television that I will never stop watching. It’s the cliffhanger to end all cliffhangers. I will hear Steve Parr yelling “wooooahhhh” in my sleep, I will see him hurtling towards oblivion every time I close my eyes, and it will never be enough.