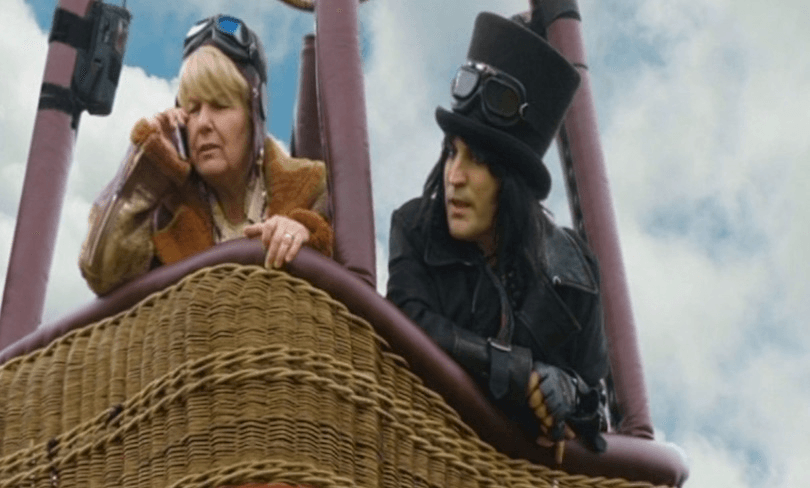 No, it’s not a reboot of Rosemary and Thyme. It’s a new season of the Great British Bakeoff!

The Great British Bake Off returns and – surprise! – it’s as good as ever

No, it’s not a reboot of Rosemary and Thyme. It’s a new season of the Great British Bakeoff!

The Great British Bake Off returned to Prime last night. Amateur baker and Bake Off fan Tara Ward was watching to see how the new Mel, Sue and Mary-less season fared.

When last we saw The Great British Bake Off, everything had turned to shit. After Channel 4 bought the show from the BBC for a bargain £75 million, beloved hosts Mel and Sue threw in the tea towel and took regal judge Mary Berry with them. The Great British Bake Off was sinking quicker than a soufflé with a soggy bottom and fans were left hugging their jelly moulds in fear and trepidation about what lay ahead.

And then Sandi Toksvig turned up in a hot air balloon, and I knew everything was going to be fine.

Season eight is an era of change for Bake Off, and yet nothing much is different. Union Jack bunting still drape the marquee walls, fresh flowers fill every nook and cranny, and the electric mixers sparkle with all our hopes and dreams. I’m more confused than the time Norman spelled out B-A-K-E in semaphore, but if this is what 75 million quid buys you these days, then I am here for it.

Of course, there are two new hosts — Sandi Toksvig and Noel Fielding — and a new judge, champion baker Prue Leith. Prue’s been baking for 50 years and promises to be firm but fair, much like an overbaked vanilla sponge. She begins by testing the bakers with a chocolate mini roll recipe that has basically no instructions.  “Let’s just say, I have more difficult challenges to come,” she promises menacingly.

That’s how Prue rolls: covered in buttercream and drizzled in melted chocolate.

Inside the tent, 12 amateur bakers wait nervously. “This is like my wedding day, except my wife isn’t here,” says biomedical scientist Yan. Steven’s mum told him he’s already a winner, while at the back of the marquee, baker Chris just wants to crack on “and burn that first cake”.

It’s Cake Week, aka every week in my house, and the bakers plough through three sticky challenges: a fruit cake, the Great Chocolate Roll Debacle of 2017 and the showstopper ‘illusion cake’. This is a cake that doesn’t look like a cake, much like the time I thawed some potato wedges and tried to fool my children by saying it was ‘dinner’.

Having abandoned the hot air balloon, Sandi and Noel wander through the marquee to offer reassuring words while ordering the bakers to keep their hands off their illusions.  Noel wears an incredible bird shirt and later puts an entire yellow marigold in his mouth. It’s my favourite moment of the episode and someone needs to cover me in sticky gold paper like one of Scottish Tom’s cake pears, because I think I’m in love.

But first, we need to talk about old mate Paul Hollywood. I’m worried the peppermint fumes from the mini rolls went straight to his head, because he bestows two of his prestigious handshakes in the very first round. Why is he thrusting his arm out willy-nilly, not once but two times? Has Paul Hollywood already reached peak handshake in the very first episode?

Heavens to Betsy, Mary Berry never had to put up with this sort of shit.

Meanwhile, cakes that are not cakes magically appear before our eyes. Stacey bakes a delicious red velvet handbag, although she lost me at “moist clutch”. The others whip up cake terrariums and banana-ramen bowls while the fabulous Flo creates a watermelon cake. Flo doesn’t even like melon, but it looks so good I give myself a Paul Hollywood double handshake of happiness.

After three gruelling challenges, handshake recipient Steven is crowned Star Baker. He’s literally the best thing since sliced bread, after baking a cake that looks like sliced bread. It’s a glorious piece of creative wizardry, and as the bunting blows in the breeze and Sandi and Noel wait for their hot air balloon to reinflate, Steven phones his mum and cries a thousand happy tears.

“I want to feel like this all the time,” he sobs, and I hug my jelly mould and nod emphatically in agreement. It’s a £75 million life lesson: cake makes you feel good, illusion is in the eye of the beholder, and a moist clutch in the hand is worth two in the bush. Bless you, The Great British Bake Off, your work here is done.

The Great British Bake Off airs on Prime on Tuesdays at 7:30pm.